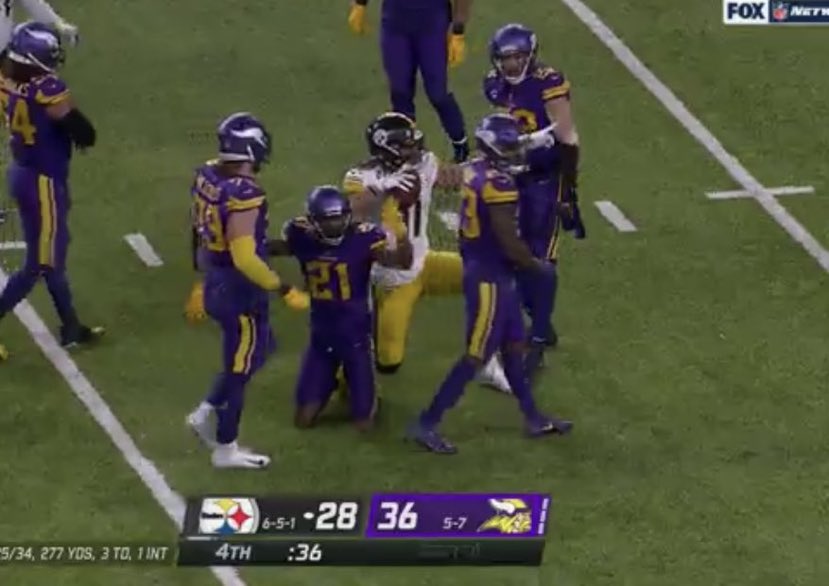 Though the Pittsburgh Steelers’ defense certainly wasn’t good enough to win on Thursday night in Minnesota, a rough defensive performance is on the back burner thanks to the mind blowing display from one Chase Claypool late in the game with the Steelers driving for a potential game-tying score.

In total, Claypool burned roughly 10 seconds off the clock in his selfish display of me-first football once again. In the end, the bone-headed play probably cost the Steelers once more shot at the end zone after Pat Freiermuth was unable to hang onto the football between three Vikings defenders.

After the game, Claypool stated the obvious to reporters, saying he has to be better in those situations, while also lamenting the lack of a penalty on   Vikings’ linebacker Eric Kendricks for knocking the football from his grasp.

“Yeah…definitely gotta be better,” Claypool said to reporters following the loss, according to video via the Steelers’ official YouTube page. “I got tackled near the hash, did my little first down point and went to hand the ball to the ref. He [the official] had just got there…so even if I got right up and looked for him, he just wasn’t there.

“So he ran down the field to come get the ball and the ball got knocked outta my hands. That’s what costed us time, but I definitely do have to be better. I knew the situation, I knew I’m near the hash. I know the ball’s placed on the hash, but I gotta be better. And…the ball shouldn’t get knocked out of my hands; that should be penalty.”

Kendricks definitely knocks the football out of his hands, which is just a savvy move from a veteran whether that’s fair or not. The fact that Claypool somehow defended doing the first-down point and blamed the official for “not being there” is just poor overall awareness from the second-year player.

He screwed up, point blank period. I’m sure veterans had some words for him in the locker room, and rightfully so. Hopefully Mike Tomlin — who benched Claypool in the first quarter for his personal foul penalty — addresses it with him moving forward too.

For as good as Claypool can be on the field play-to-play, he continues to make dumb decisions between the whistles, which feels par for the course with him right now.