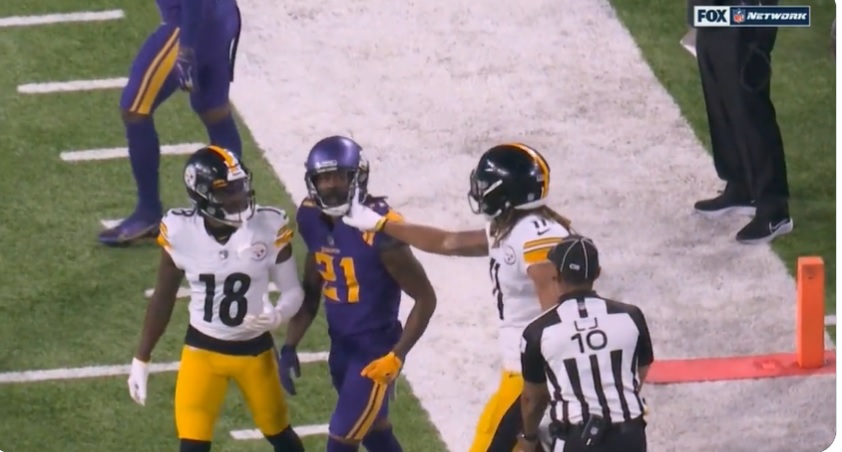 If there was ever a game to sum up WR Chase Claypool, it was Thursday night’s performance. The highs make you want to smile ear to ear. The lows make you want to want to flip off your TV. Claypool had an abysmal first half and showed a low football IQ throughout the game, starting with a personal foul penalty after sticking his hand in a Viking defender’s facemask.

Claypool was taken off the field, and after the game, Mike Tomlin confirmed he briefly benched him.

“I did,” Tomlin told reporters via Steelers.com when asked if Tomlin had an intentional benching after the penalty.

Here’s a look at the penalty. Claypool was retaliating after the Vikings’ defender shoved him with his shoulder. But the refs always get the guy who responds, and Claypool’s actions were blatant and stupid. A 2nd and 4 turned into 2nd and 19.

Claypool later nearly fumbled the ball away, reaching out for the marker on 2nd and 2. The officials initially ruled it a fumble, but overturned it on replay. Claypool’s risk was not worth the reward. As Bill Belichick preaches, the only time a player should stretch the ball out is on fourth down.

Claypool did respond with a couple of sensational grabs in the second half, including an impossible-to-believe sideline grab late in the fourth quarter. But even his high moments have low ones. He caught a 4th and 1 slant on the final drive, but on a running clock, celebrated after the play instead of handing the ball to the official. Veteran guard Trai Turner had to rip the ball away from him and Claypool, still seemingly unaware of what was happening, seemed to shove Turner. Precious seconds ticked off the clock.

Tomlin was asked if he thought Claypool received the message from his benching.

“We’ll see,” Tomlin responded, throwing a hand up in the air as if to say “I don’t know.” Based on Claypool’s again immature moment on that final drive, it’s clear he didn’t fully get it.

In 2021, Claypool hasn’t played up to his talent and played down to his age, again and again showing immaturity. He has the emotional maturity of a a typical 17-year-old trying to sneak his first beer into his parent’s basement. Getting into skirmishes with players, asking for music in practice, and his actions Thursday night. He makes enough plays to justify his role and snap count. But if he wants to become a player who matches his physical talent, he’ll need to grow up. And fast.