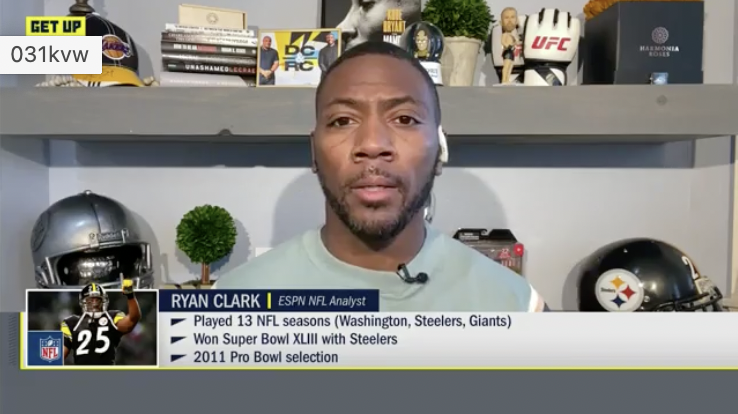 ESPN analyst and former Pittsburgh Steelers safety Ryan Clark sure has fired off some hot takes in recent days regarding his former employer.

None hotter, arguably, than the hot take Clark fired off Friday morning on ESPN’s Get Up with Mike Greenberg.

Clark, who previously questioned the Steelers’ mentality defensively, stated Friday that he believes it’s time for the Steelers to make a change at quarterback and figure out what they have in guys like Mason Rudolph and Dwayne Haskins.

Greenberg asked Clark point blank if it was time to bench a struggling Roethlisberger, who looked rather old on Sunday against the Cincinnati Bengals.

“I think it’s hard to bench a legend. I think that’s a very difficult thing to do. We saw that happen in New York with someone drafted in his same draft class in Eli Manning,” Clark said, according to video via ESPN’s YouTube page. “I owe my Super Bowl ring to Ben Roethlisberger. With all that being said, time is up. It’s time to move on. It’s time to see what else you have in that locker room.

Question Roethlisberger’s physical abilities all you want. That’s fair game, considering he’s 39 years old, moves around like he’s much older than that, and simply isn’t who he once was. That’s understandable and forgivable, considering all the wear and tear his body has taken over the years.

But to question his ability to help make players around him better, to help them grow as professionals and learn on the job…that sure is something from Clark. Is he completely wrong? Maybe not, especially from the progress standpoint. But to say guys aren’t growing with Roethlisberger and aren’t learning from him, that’s a tough hill to take a stance on.

Clark went on to elaborate that final point.

“He hurts Chase Claypool. He hurts Diontae Johnson. He hurts Najee Harris. He hurts the Pittsburgh Steelers offense as a whole,” Clark said. “And if you don’t have something better in Mason Rudolph, if you don’t have something better in Dwayne Haskins, then it’s your fault, Pittsburgh Steelers. That’s your fault for starting this season with the quarterback room looking the way it is. But for what it is right now, Big Ben can’t take you to a Super Bowl. Big Ben can’t help this team be better. Big. Ben can no longer help the people around him grow. It’s time for Big Ben to take a seat.”

Is it fair to say Roethlisberger is hurting Chase Claypool? Maybe. He’s certainly not helping him, especially with his deep ball accuracies, his double-clutching on RPOs, and just the overall lack of targets. That said, there’s not a chance that Roethlisberger is hurting guys like Diontae Johnson or Najee Harris. Johnson has developed into a true No. 1 wide receiver with Roethlisberger, while Harris’ issues have to do with a bad offensive line.

It is true that Roethlisberger is not taking this team to a Super Bowl in 2021, but does that mean it’s time to pull the plug for someone like Rudolph or Haskins? That’s an extreme stance.

The Steelers know exactly what they have in Rudolph; nothing more needs to be figured out. He’s a solid backup quarterback, but he’s not the future. Haskins, the argument could be made that more needs to be seen, but the fact of the matter is he’s not even getting a helmet on gamedays over Rudolph. So all of a sudden while still in the playoff picture, it’s time to pull the plug on a future Hall of Famer and go with a guy who is on his second and possibly final chance in the league?

Clark is very good on television and has well thought out takes, but this one wasn’t one of them. The Steelers’ issues run much deeper than an old Roethlisberger offensively and defensively, for that matter.

Ride it out with the old gunslinger behind center and see where you’re at end of the season. The alternative isn’t any better.