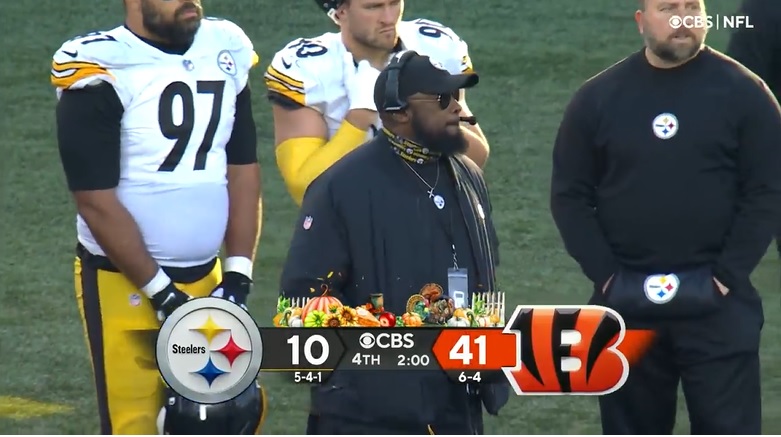 Mike Tomlin made clear what every Steelers fan knew coming into this game. This game against the Cincinnati Bengals was especially important.

Key defenders such as T.J. Watt and Minkah Fitzpatrick returning to bolster a sagging defense. Avenging the week three loss to the Bengals critical to keep relevant in the race for a play off spot. We also knew the running game that suddenly disappeared needed to reappear.

I normally break down the key offensive and defensive drives and plays to follow the ebb and flow of the game. But this game was all ebb with no flow.

Shortly after CBS posted a graphic showing Ben Roethlisberger threw 173 straight passes without an interception … Ben threw an interception. The errant pass was the 175th pass since his last.

Near the end of the first half, Minkah Fitzpatrick stopped a Bengals offensive drive with his first interception of the season. On the very next play, Ben throws a pick-six to Mike Hilton to complete the Bengals scoring drive for them. It’s 31-3 at halftime.

The second half little better. The Bengals strip sack Ben on the second drive and exploit the takeaway with a field goal. The Steelers offense punts three other times including one from just in Bengal’s territory. Pat Freiermuth does make a tough touchdown catch late in the fourth quarter. But by this time, Cincinnati is giving their backups playing time.

The Steelers defense matched the offense with their ineptitude. The Bengals scored on their first four possessions to build a 24-3 lead. Joe Burrow went left and evaded Minkah Fitzpatrick’s lame attempt to tackle the quarterback to open the scoring at 7-0.

Minkah Fitzpatrick intercepted Joe Burrow’s pass near the end of the half. However, Mike Hilton said, “hold my beer.” Then intercepted Ben’s first pass after the takeaway to score a touchdown on a pick-six.

The 41-3 score could have been worse. Both Joe Burrow and Joe Mixon rested on the bench following their last touchdown with 13:13 still to play. The Steelers defense played against backup quarterback and running back for a quarter. Even then, the defense could not keep them penned up behind the ten-yard line. A holding call put the Bengals at the four-yard line. But on third and eight, reserve back Chris Evans RAN 13 yards for the first down. The Bengals backups picked up 20 yards before punting the ball away.

While individual players played particularly poorly. This was a complete letdown by the defensive unit.

Plug him in. Plug him in #Steelers pic.twitter.com/ghpcZszLi1

Chris Boswell kicked off three times. All three reached the end zone. Darius Phillips hesitated on the third then brought it out returning 12 yards to the ten. A clear sign of disrespect with the Bengals up 41-10 in the fourth quarter. Bengal’s average starting position was their own 20-yard line.

McFarland returned the ball okay. But did not do anything to jeopardize Ray-Ray McCloud’s hold as the kick returner. The Steelers get the edge on kickoffs because of Phillips stupid decision. However, it had no impact on the game’s outcome.

Pressley Harvin III punted five times. Darrius Phillips returned one 17 yards. Then Derek Watt tackled Phillips on the next return for no gain. Harvin did punt twice from within Bengal’s territory. His last downed at the seven-yard line. However, Harvin punted short when he had a wide-open field. His longest punt 42 yards that gave Phillips too much room to run. He punted twice for less than 40 yards with no returns, but Bengals had starting positions at the 29- and 35-yard lines. As a result, Harvin netted only 34.6 yards a punt.

Harvin’s punts on short field are acceptable. However, his punting with wide open space is a problem. He is not helping the team to flip the field. Not sure if Danny Smith asking Harvin to shorten his punts to gain height or if his execution is off.

Evan McPherson also perfect. But he had five points after touchdown and two field goals. The number of opportunities count.

The Steelers failed to accomplish a single key to victory.

Thank you, Josh Carney, for keeping us up to date on the game’s first half Live Update and Discussion Thread. Condolences to Ross McCorkle who witnessed the Steelers debacle in person. Steelers Depot respondents met the standard with 1430 first half comments.

I authored the “best” comment of the half early in the game. Just after Ben threw his first interception. It did not get better. “I picked the wrong day to quit huffing glue.”

The Steelers first half performance just proved what RJMcReady already knew. “When we couldn’t beat the winless lions at home to take control of the division 2 weeks ago, I knew our season was over. Nothing else has been a surprise since.”

BigDickSwanging focused on a defense giving up a score on every Bengals drive. “There is no fire, no nastiness in this D… This is not a Steelers Defense.”

Bearorbull bearish on the Steelers. “Finally dawning on some people that we were lucky as heck to have won the division last season.”

Tony Sopranos Mom hoped for an explanation. “Looking forward to the fancy word salad Tomlin has to describe this train wreck.” Meanwhile HaterzMD concluded “They’re just flat out better than us.”

Steelers down 24-3 at half. Minkah Fitzpatrick’s interception outshone by Mike Hilton’s pick six. Not even much time to celebrate one good play.

Jason W delivered the “best” comment of the half. “Off topic but people who compared Claypool to Calvin Johnson and gave him that ridiculous ‘Mapletron’ nickname should be ashamed. They shouldn’t be mentioned in the same breath.” Off topic but anything to distract from the dismal performance.

Jake is the Ace also got high marks for a comment that focused on another team not even on the field. “Of course, the Pats become a playoff team one year after having a down season. Anyone who says Bill can’t win without Brady must be eating some crow.”

Donald has seen this coming for years. “Anybody still think that if they just get a few of their starters back they can become a ‘good’ team again? That’s the response I got last week when I said they’re still not a ‘good’ team even WITH their starters. And I also said they shoulda had Ben’s replacement already in place 5 years ago, but they decided to extend Ben instead. Well, they’re payin’ for it now and probably for the foreseeable future. SMH.”

Many folks agree with RR, “Coaching is the root problem. Blah blah blah player quality nonsense
Either you can’t evaluate talent, or you can’t develop it! 10 years of poor player quality and execution excuses are played out already c’mon folks! The buck has to stop with coaches and management when it is sustained mediocrity!”

Chris92021 concludes with a good summation. “This might be the worst game ever in the Tomlin Era.”

Not expecting much optimism after such a lackluster performance.

The offensive line is regressing. Players standing in place after the snap of the ball. Young players are committing dumb personal fouls that negate positive plays. A complete role reversal with the Bengals. It was truly the Pittsburgh Bungles out there Sunday. Mike Tomlin is getting a chance to share the frustration that Marvin Lewis experienced all those seasons.

The Ravens are up next. An extraordinarily strong running team. The situation is analogous to this aviation dilemma: “We’re out of fuel and running out of airspeed, altitude and ideas.” It’s next to impossible to pull out of a spiral in that situation. Cam Heyward described the Steelers situation succinctly, “If We Do What We Did Out There Today, We Won’t Win Another Damn Game.”

Pittsburgh will make changes. But these are actions of a desperate team.

I always like to offer a music selection. Mike Tomlin cannot afford to offer tenderness or words of sympathy to the players or coaching staff. His actions need to be filled with brutal honesty. Even if it means benching a first round pick for a rookie for lack of effort. Or revising schemes to shield the weaknesses of young players instead of trying to make them fit a coordinator’s complex dreams. Here is Honesty by Billy Joel.