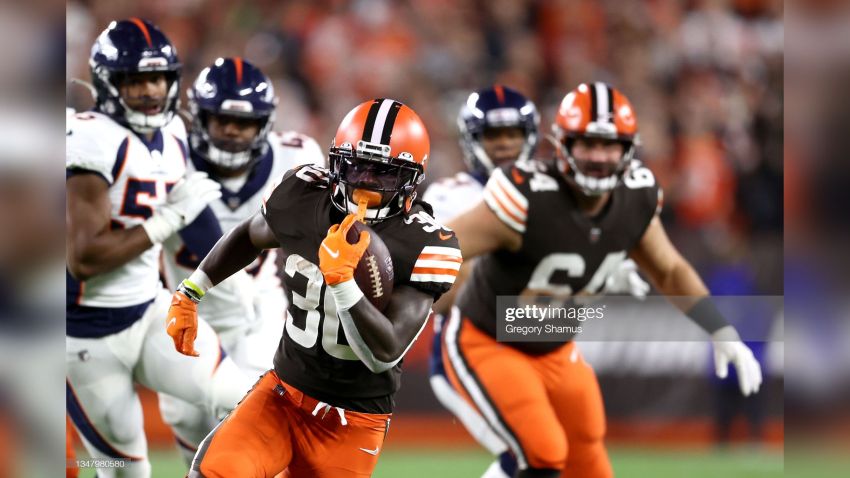 The Cleveland Browns found themselves minus their starting quarterback, Baker Mayfield, for Thursday night’s game. It’s not clear if he will miss more time than that, with the Pittsburgh Steelers on deck. But the fact that they were able to win last night without Mayfield and their two Pro Bowl running backs, Nick Chubb and Kareem Hunt, was really quite impressive.

That just shows you the importance of being D’Ernest.

D’Ernest Johnson, that is, the Browns’ third-string running back. A former college free agent out of South Florida in 2018, he got a rookie minicamp invitation with the New Orleans Saints, but that’s as far as he got before he turned things up in the Alliance of American Football.

He is now in his third season with the Browns, but this was his first extended action, having had just 50 career touches in his first 38 games in the NFL. He merely rushed for 146 yards on 22 carries for the Browns, including a touchdown, the first of his career.

Sure, it was one game, and yes, the Browns do have one of the better offensive lines in football, even with Jack Conklin missing last night’s game and Jedrick Wills nursing an ankle injury despite being able to suit up and play. But it is a reminder that you don’t need to be a ‘pedigreed’ player to make an impact at the running back position.

This has been a discussion in Steelers fandom this year after the team used its first-round draft pick on Najee Harris, whom we were earlier this season celebrating for a 23-carry, 122-yard, 1-touchdown performance. To date, Harris has 388 rushing yards on 102 carries with two rushing touchdowns, plus 244 receiving yards on 34 receptions and two more scores.

Now, are Harris and Johnson equals in terms of talent and impact? Of course not. Would Harris have much better numbers running behind a more established offensive line like the Browns’, and conversely, would Johnson have had the sort of night he did last night running behind the Steelers’ line? Of course not.

But these are the discussions that you have to have, at least if you have any say in actually building a team, when it comes to putting together a plan. Johnson is good, sure, but so is Harris. The bigger variable is the offensive line. So how do you build a run game? The trenches would be a good place to start.

That’s where Cleveland began, starting with Joel Bitonio in the draft. They later added J.C. Tretter in free agency, and still later Wyatt Teller and Jack Conklin, then drafted Wills in the first round last year. All of a sudden they went from one of the worst lines to one of the best, and had by far their best season in decades.