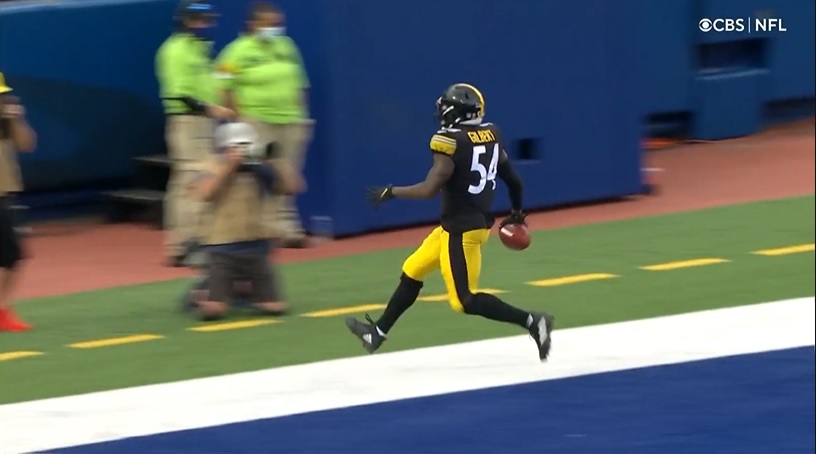 It’s not too often linebackers get to enjoy a touchdown celebration. But Ulysees Gilbert III got that chance Sunday, scooping and scoring off Miles Killebrew’s punt block, a momentum and game-changing play as the Pittsburgh Steelers stormed back to beat the Buffalo Bills Sunday.

Speaking with reporters, Gilbert III expressed what that play means to him.

“it’s just a blessing. I just can’t thank God enough just for the opportunity,” Gilbert told reporters via Steelers.com. “I don’t think it really set in for me until I got to the sideline and just sat down. To see all the guys so excited and to see all my teammates just come around me. And we’re just all excited about just making a play was just amazing to me. It was just something that I’ll remember forever. Not only just because the game was so big. But because it’s playing your brothers day in and day out and just all the things we went through with camp. It just felt amazing.”

Killebrew knifed in through the A gap and blocked Matt Haack’s punt. Gilbert found the ball and picked it up, running into the end zone with a convoy of black and gold around him. A great finish to a great play. Picking the ball up is just that but so many times, we’ve seen players struggle to field it cleanly and squander the chance for the score. Much better to put the ball in the end zone in the moment than giving the Bills’ defense a chance to defend a short field.

“It was just a play that we’ve been running all week practice,” Gilbert went on to say. “Then just a lot of effort and a lot of great execution. And then when the ball was right there. I just saw that out of the corner of my eye. And thankfully it was right there. Just picked up and ran it to the end zone.”

We broke the punt block down this morning, a well-timed twist between Killebrew, Buddy Johnson, and Marcus Allen that caused three Bills to block two Steelers, leaving Killebrew free up the middle.

While both teams made splash plays on special teams, the Steelers put theirs in the end zone. Buffalo returned the opening kickoff 75 yards but couldn’t score. In fact, it was UG3 who made the tackle there, too. Pittsburgh’s defense did their job, forcing a three and out and Bills’ field goal.

Gilbert had a rough summer, struggling especially in the first two preseason games. But he made the team and is now making an impact, stating his case to stay on the roster all year. That is, assuming he can stay healthy, an issue that’s plagued him his first two seasons.