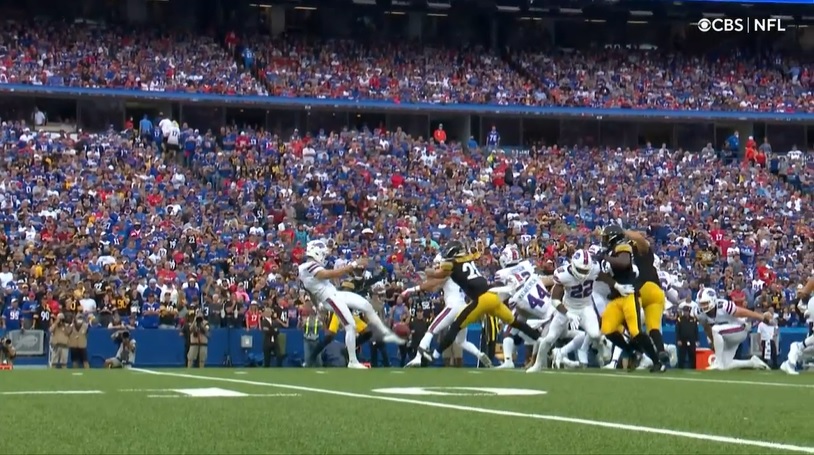 Ok, no one was saying that after the first half. Myself included. The Pittsburgh Steelers’ special teams were rough in the first 30 minutes. Buffalo’s Isaiah McKenzie ran back the opening kick 75 yards while Pressley Harvin could’ve, and probably should’ve, had his first ever punt blocked.

But special teams redeemed themselves. Miles Killebrew made the play of the day, blocking Matt Haack’s fourth quarter punt, recovered by Ulysees Gilbert III, who ran into the end zone for the score. It was part of a wild 14-point swing that saw the Steelers down 10-6 to go up 20-10 in mere minutes.

Make no mistake. Punt blocks aren’t an accident. They come in one of two forms. Either a complete mental breakdown by the punt team or great scheme and execution by the punt block/return team. Killebrew’s example was more of the former. Smith’s as good as any special teams coach in football when it comes to scheming up punt blocks. And he got the Bills in a big way Sunday.

Let’s break it down.

Like an offensive line, I break the punt protection team down into triangles. It’s not seven blocking seven. It’s groups of blockers against groups of rushers. Here’s how the two sides line up. 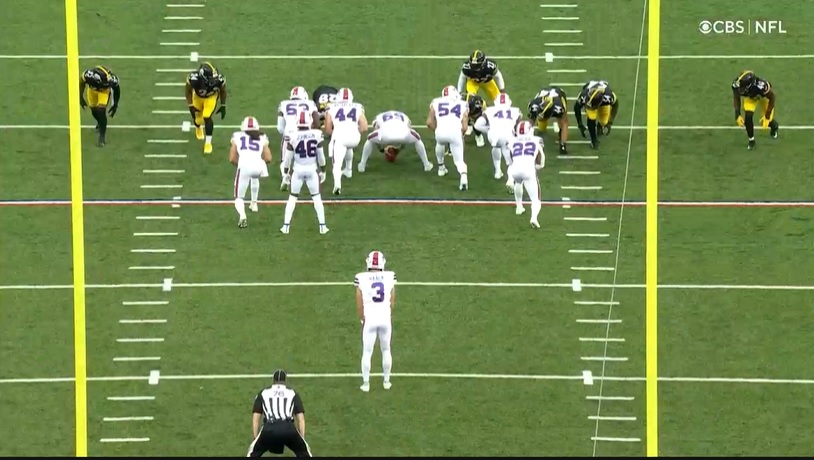 I (with my awesome Microsoft Paint skillz) have highlighted those segments below. 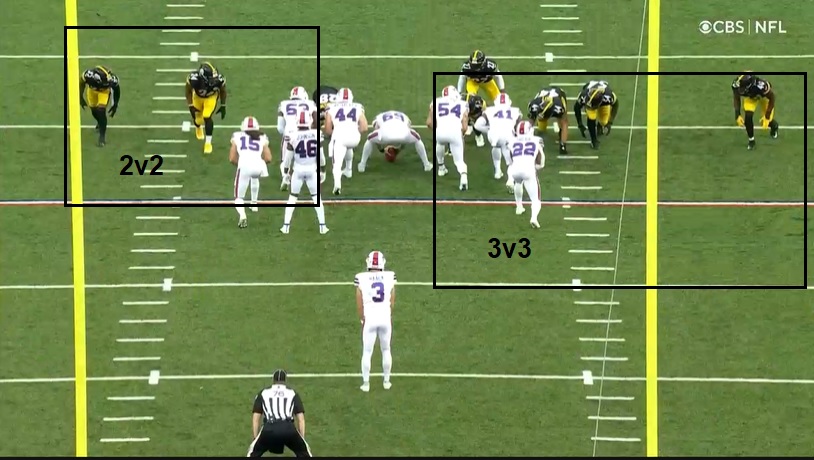 The outside rushes to both sides are standard. They’re essentially contain to fan the Bills’ unit out and give the interior three guys a chance to win, just like a defensive pass rush that runs a game inside. To the inside, Pittsburgh runs a twist with Marcus Allen, Miles Killebrew, and Buddy Johnson. Here’s the assignments. 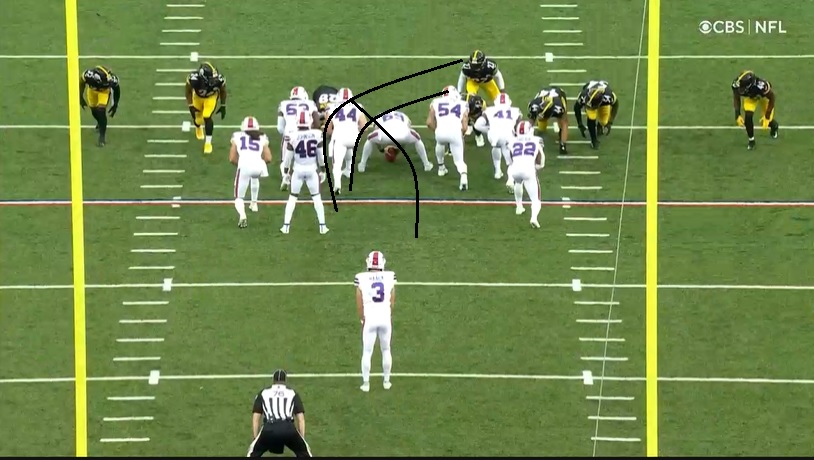 The goal here is to make one of those interior three blockers wrong. That one doesn’t pass off their guy correctly, two players double one Steeler, and someone gets free. Usually it’s trying to attack the long snapper/upback duo. Most times, they’re blocking opposite ways. Upback blocks left, snapper blocks right and vice versa.

And that’s what happens here. Really, it’s hard to tell where the Bills go wrong. The upback, left guard (#44) and long snapper all block left. It picks up Johnson and Allen. But not Killebrew, who is slanting right (from the Bills’ view) and squeezes through between the LG and LS. With the upback shifting left, there’s no one to block Killebrew, who runs free up the middle.

It’s also worth noting because of how the Steelers aligned initially, with Allen/Johnson to the snapper’s right, the snapper steps to his right off the snap. That creates space for Killebrew to squeeze through and get free.

Three blockers on two defenders. That’s a result you want. 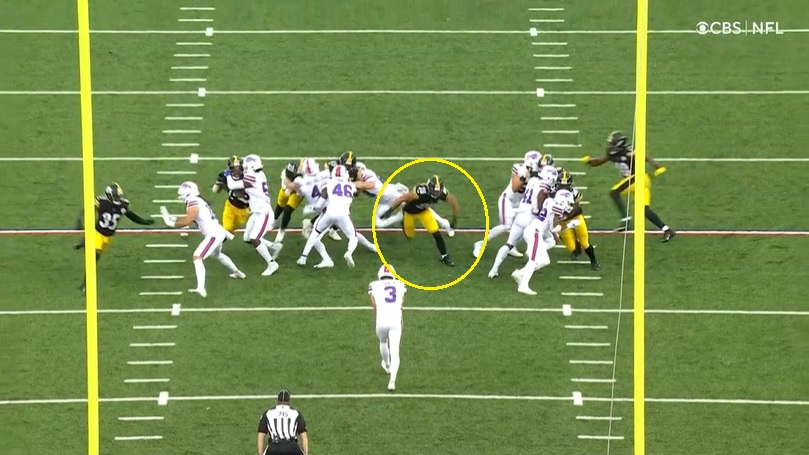 No wasted steps here for Killebrew, who attacks the ball palms down, runs to the side of the punter as to not run into him and risk a penalty, and deflects the ball.

Good awareness from UG3 who scoops and scores to complete the play. In this case, Pittsburgh finished their special teams splash in the end zone, unlike Buffalo, who settled for a field goal. Pittsburgh’s ST splash produced seven. Buffalo’s only three.

Here’s a look at the entire play.

In past games with a punt block, the Steelers would usually set their punt up with a change in design or alignment of a particular player, like Roosevelt Nix. From what I can tell off TV tape, that didn’t happen here. In fact, the Steelers had “safe” returns that didn’t show much of a rush prior to this. And maybe that was the plan. Danny Smith not tipping his hand of aggressive rushes until he needed one in a big moment. Open-air punt for the Bills with Pittsburgh grabbing the lead. He then dialed up a perfect pressure, confused the Bills’ key blockers, and the players did a great job of executing the play.

For Killebrew, that’s why he’s here. Not to play safety. Not to pick off passes. But to be a great, veteran special teams player who can go out and do that stuff. Hit the gap, have the size/physicality to stay balanced and work through, and then show technique to go finish the play. You don’t get many of these free rushes so you gotta make them count. He did and the Steelers did. You can bet the Raiders are going to have to work on their protections a little more to make sure they don’t suffer a similar result.