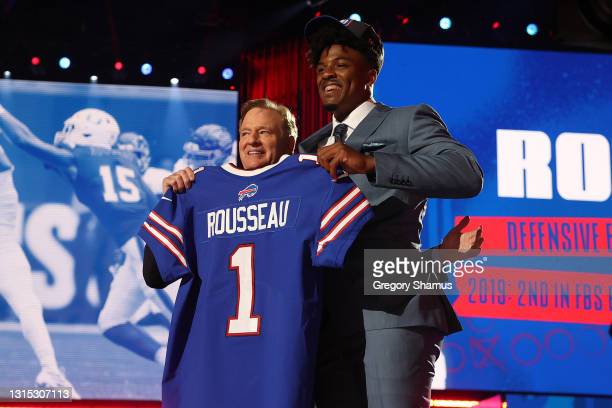 My friend and fellow Steelers Depot contributor Wesley Cantliffe recently posted a film room breaking down Buffalo Bills WR Stefon Diggs, highlighting what went wrong in the team’s 2020 matchup and how the Steelers defense should adjust to avoid Diggs having a monster game this time around when the two teams match up on Sept. 12. At the end of his breakdown, Cantliffe referenced that the OL along with the secondary are the two positions to watch come the Week 1 matchup. Seeing as he addressed the secondary in his film room, I attempt to address the importance of the OL play, more specifically, pass protection of OTs Dan Moore Jr. and Chukwuma Okorafor.

It came as a little bit of a shock to see OT Zach Banner placed on short-term IR to begin the season once the initial 53-man roster was set. This has led to Pittsburgh moving Chuks Okorafor back from the left side where they planned to play him this season to the right side where he started 15 games for them in 2020. The reason behind this move was to allow rookie fourth-round pick Dan Moore Jr. to play his more natural position at LT where he is staled to start against the Buffalo Bills next Sunday. Now Moore has had an impressive training camp and has looked good thus far in the preseason, but he may be getting a trial-by-fire exposure to the NFL.

The Buffalo Bills defense has predominately known for its strength in coverage, more specifically its secondary. Having the likes of Tre’Davious White, Micah Hyde, Jordan Poyer, along with many other solid defenders in their respective roles on the back end make things difficult for opposing signal callers to pick them apart in the passing game. The defensive line, meanwhile, has seemed to be the spot that needed catching up to the secondary and LB core. It’s not like the Buffalo defensive line has been bad, but they have lacked that star power the other units boast and sought out the last few seasons to improve this unit to solidify their defense.

Trust me when I say that they have succeeded in adding tons of talent to their defensive front over the last couple of seasons. They kicked things off by fortifying the interior by selecting DL Ed Oliver #9 overall in the 2019 NFL Draft. The also signed DT Star Lotulelei from the Carolina Panthers in free agency the year prior in 2018 to shore up the Buffalo run defense. However, the last two seasons, Buffalo has tried to add talent at the EDGE position, selection A.J. Epenesa in the second-round in the 2020 NFL Draft and followed up by taking EDGEs Gregory Rousseau 30th overall in the first round and Carlos “Boogie” Basham 61st overall in the second round in the 2021 NFL Draft.

Buffalo has made an aggressive effort to improve upfront, investing their top pick in each of the last three drafts (didn’t have a first rounder in 2020 due to the Stefon Diggs trade) to address the defensive line. Needless to say, the investment has paid off based on what we have seen this far. I personally got to work with Epenesa when I was with the Iowa Hawkeyes Football Strength and Conditioning Program in 2019, assisting the team with spring ball workouts and Combine/Pro Day prep for the players training for the 2019 NFL Draft.

Epenesa’s talent was unquestioned, as he had the size, frame, and fluidity as a pass rusher no one else on the team had. However, he was lazy in his work habits and would notably take plays off. He constantly was battling to maintain his playing weight and had more of a “sloppy body” than someone you would expect to be a top draft choice. His poor Combine performance the next spring was evidence of that, leading to his large draft day slide to the second-round when he was labeled a first-round talent. The experience humbled Epenesa who started out as a rotational defender for Buffalo in his first season, but later saw his snaps increase and became a regular contributor on the defense.

Heading into 2021, it’s clear that Epenesa has improved his body and his mindset. He has looked like an absolute force in the preseason, terrorizing offensive tackles with his strength and power off of the edge. Watch this rep against the Bears LT #70 Elijah Wilkinson, hitting him with the long arm as he runs through the blocker, tossing him on his backside and pounces on #14 Andy Dalton for the huge sack fumble. Also note in this clip #96 rookie Carlos Basham kick inside and take on the double team to get Epenesa the one-on-one matchup.

Here is another play against the Lions where Epenesa blows right past the LT after using the two-hand swipe with a rip to flatten to corner and plant the QB into the turf as he just manages to get the ball of the back in the flat who attempts to get back to the LOS.

Notice how on the play above that #50 Gregory Rousseau was able to get in on the QB hit with Epenesa. Rousseau has also had a great preseason thus far, utilizing his tools as a long, athletic pass rusher to keep blockers off of his farm and get around blocks to impact the passer with his impressive wing span.

Check out this play from the same game where Rousseau is matchup up with fellow rookie OT #58 Penei Sewell and gets his hands right inside Sewell’s chest, extending him back to get him falling backwards with his impressive reach. He then continues to long arm Sewell with his right arm as he reaches out for the QB with his left, just getting enough of the QB to force him to tuck the football which leads to the rest of the defense converging on the passer in the pocket for the sack.

Personally, I got on Rousseau during the draft process due to the fact that he was extremely raw as a pass rusher and didn’t really possess a go-to pass rush move but rather won by traits alone and being kicked inside for mismatches against opposing college guards. While this may be the case, I did recognize the immense upside he has given his length, athleticism, and the fact that he was still learning the position, having only played on the DL at Miami for two seasons before opting out to declare for the 2021 NFL Draft.

We see Rousseau’s traits again on display here against Chicago as he challenges the depth of the pocket by the RT, getting him to violently kick step on his pass set. Rousseau sees this and exploits it by countering back inside across the tackle’s face, again using his long arms to bench press the tackle away from his frame and engulf the QB in the pocket for the big sack.

The scary thing is, Rousseau, Epenesa, and Basham all have experience kicking inside at the college level and rushing against guards and centers, meaning that Buffalo will have the option of deploying multiple pass rushers on the third downs and obvious passing situations to attack the pass protection of the opposing offense. Along with the young guns, Buffalo has a couple of grizzled veterans that have been solid pass rushers in their own right throughout their careers.

EDGE #97 Mario Addison is another former Carolina Panther that decided to follow his former DC Sean McDermott to Buffalo, adding more experience upfront in the pass rush department. He has been productive getting to the QB for a number of years now, not drawing national attention but consistently producing in the sack category. While the other EDGE rushers are more known for winning off of power, Addison throws a little finesse into his game as we see on this sack on #15 Patrick Mahomes last season, hitting the inside spin move on #72 Eric Fisher to get right into the face of Mahomes of the sack on the play.

While Addison may be the oldest member of the Bills EDGE group, #55 Jerry Hughes is considered the patriarch. He has been with the team since 2013 and although his production has dipped in recent seasons, his impact both on-and-off the field can’t be underestimated. He is in the opposite mold of the younger Bills pass rushers, standing at only 6’2, 254lb, and wins with speed and quickness off of the edge. He is fairly sound as a technician and can bend with the best of them around the corner as we see on this speed rush against Minnesota, getting underneath #71 Riley Reiff as he forces #8 Kirk Cousins to throw the pass early, resulting in an incompletion.

Overall, it goes without saying that Pittsburgh’s OTs will have their hands full come September 12 when they head up to Buffalo to face the Bills. Both Dan Moore Jr. and Chukwuma Okorafor will be tasked with handling a blend of speed and power with the different options Buffalo has at their disposal, utilizing youth and athleticism as well as age and experience in attempt to best Pittsburgh’s pass protection in pursuit of Ben Roethlisberger.

Because of the relative inexperience with Moore and the up-and-down play from Okorafor, I would wager we will see a similar passing game that we saw last season against Buffalo where Ben is getting the ball out quick on short crossing patterns over the middle, quick outs to the sideline, and utilizing Najee Harris in the screen game as well as in the flats as a check down option. Sure, they will likely take their shots deep as the game calls for it, but they will need to likely have either max protection on their deep shots or keep a TE or RB in to help on the edge to keep the pressure from getting to Ben in the pocket.

Sunday will be a big test for where this Steelers team is heading into 2021, and more specifically, where this offensive line is at after being completely revamped this offseason. Buffalo will be bringing a daunting group of pass rushers to challenge the youth and inexperience of Pittsburgh, and this will be a matchup I will be keeping my eyes on as the potential deciding factor on the outcome of the game.

What do you think of the Buffalo Bills pass rush? Do you think that they will be a thorn in the side of the Steelers OTs in their Week 1 matchup? Do you see Chuks and Dan Moore Jr. being able to hold their own? Please leave your thoughts in the comments section below and thanks again for reading!