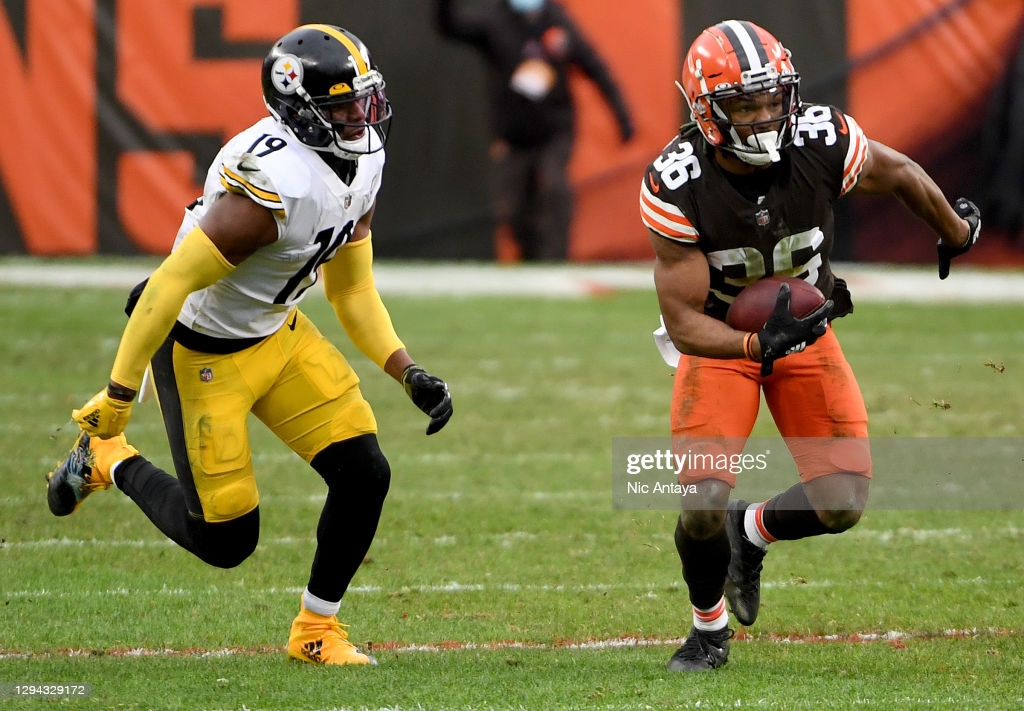 The Pittsburgh Steelers seem to only want one thing this summer. A slot cornerback who can hit. Keith Butler made that point pretty clear in speaking with the media yesterday, repeatedly saying they liked slot corners who could hit, blitz, and they were still searching for that guy on the roster.

So let’s induldge that desire. Clearly, the team isn’t happy with their in-house options. Arthur Maulet has that type of skillset but has hardly been mentioned by the coaching staff. So if it’s not anyone on the team, who on the outside could scratch that itch?

Pouring over the NFL’s rosters, I was looking for three things.

1. NFL experience (aka no rookies/guys who haven’t taken snaps in the league before)
2. Slot corners
3. Physical players

I came away with two names. Let’s talk about them.

Old as this site is, Stewart’s been on our radar from the beginning. A rocked up corner at North Carolina, he weighed in at just under 5’11, 200 pounds at his 2018 Combine workout. Athletically, his testing was just average but his production was strong and a bit unique. At UNC, he had 11.5 TFL and three career sacks, including two his senior year.

Here’s what we wrote in our scouting report of the “Good” of his game. He profiles like Mike Hilton and played as one of the hardest hitting DBs in the ACC.

“– Ideal slot corner at NFL level with blend of blitzing, tackling, physicality
– Strong tackler who is willing to support the run and put his face in the fan, not a weak tackler
– Comfortable in press man and shows strength and a powerful jam when playing with proper technique
– Versatile, played inside and out, though home is likely in the slot at next level
– Competitive at catch point and improved there throughout his career, tracks and plays the ball well
– High energy player
– Tons of experience as a blitzer and times them well from the slot, effective and able to finish
– Some return value
– Quality starting experience, durable
– Coaches praise his work ethic”

Stewart was drafted in the second round by Tampa Bay, bringing draft pick pedigree the Steelers seem to love when adding players like him. His NFL career has been bumpy, spending just two years in Tampa and last season with Cleveland. He played all 16 games with the Browns and though he didn’t log a start, he did play over 200 snaps defensively (and another 245 on special teams) and came away with two regular season interceptions. One of those picks came in the Week 17 finale versus Pittsburgh, which he ran back 30 yards, and a third came in the Steelers’ ugly Wild Card loss. The Steelers remember his name well, I’m sure.

Stewart has been hampered by a hamstring injury in camp this summer, putting his roster spot in jeopardy. Sounds like he’s right on the bubble of being the last CB kept. That might be a good thing for Pittsburgh. Trying to trade for Stewart would be tough not only because it’s an AFC North opponent (though the Gilbert/Coates/Wormley deals put cold water on the notion) but because the Steelers don’t really have many draft picks to give up. But maybe they could swing a trade if they’re that desperate.

If that’s what the Steelers are adamant they want, a Mike Hilton-clone on the cheap, Stewart is their guy. He’s owed just over $1.1 million this year.

As mentioned by our Tom Mead  back in July. At the time, Mead wrote:

“Overall he played 67 games with 31 starts with 211 tackles, 189 solo, five TFL, four interceptions and 33 pass breakups. Roberts can play inside, outside, and has played some safety as well, and has shown good ball production in each season. He also had a pre-draft visit with Pittsburgh.“

That visit came way back in 2015 and the Steelers never took him, Roberts falling to the 7th round, but he’s shown staying power in the league. After spending several years with the Jets, he played for the Lions last season, starting vie games and recording one interception. Washington signed him this offseason but it sounds like he’s on the outside-looking-in when it comes to making the team. As Tom mentioned, he’s played all over the field defensively, was an A+ athlete coming out of school, and though he just turned 30, the Steelers did break their “rule” with the Melvin Ingram signing.

Admittedly, I’ve suggested his name before and it’s never come to fruition. So the odds of it happening now probably aren’t great. Stewart makes a lot more sense. But Roberts is also a little more likely to be cut, making him a potentially more available candidate when the Steelers scour the waiver wire.