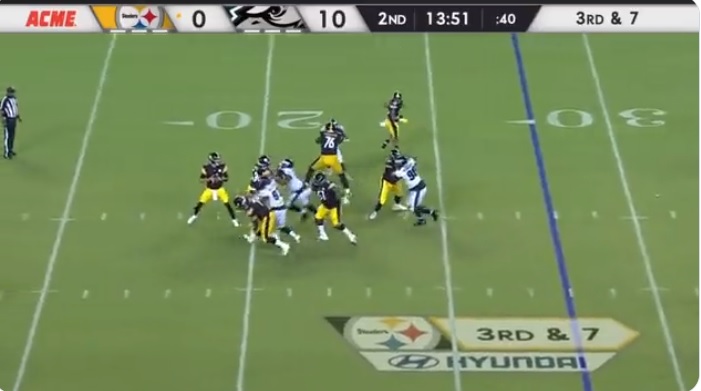 The trade for LB Joe Schobert will steal the Friday morning headlines, but the Pittsburgh Steelers played a game last night. And for those who took the field, the moving and shaking didn’t matter one bit. Neither does the outcome, though the Steelers picked up their second win in as many weeks, defeating the Philadelphia Eagles 24-16.

Linebacker Devin Bush saw his first game action since tearing his ACL last season. He was greeted by TE Zach Ertz, who caught a 34-yard pass on a corner route versus Bush on the game’s second play. The Eagles, led by starting QB Jalen Hurts, ended their opening drive with a Jake Elliott 47-yard field goal.

Mason Rudolph got the start for Pittsburgh, though he led the Steelers to three straight punts. The offensive line was a much healthier-looking version of itself compared to last week. The only projected starter who did not play was RT Zach Banner, though LG Kevin Dotson did not start the game. Their results, though were a mixed bag. Najee Harris again got the nod, carrying the ball twice for ten yards and one catch that went for nine, all wrapped up in some hold-your-breath hurdles.

The Eagles raced out to a 13-0 lead, highlighted by WR Quez Watkins, who took a quick screen and ran 79 yards into the end zone, sprinting away from rookie safety Tre Norwood as the Steelers’ last line of defense. Elliott would add another long field goal to give Philadelphia a 13-point advantage.

Dwayne Haskins put together the Steelers’ first scoring drive late in the first half. Jaylen Samuels busted off a pair of healthy runs, gains of seven and twelve, and Haskins found WR Cody White down the left seam for a gain of 18 down to the Eagles’ six. After an end zone pass interference, RB Anthony McFarland bounced a goal line run left side for a two-yard touchdown.

“We just managed the situation very well,” Tomlin told Missi Matthews of the drive. “We took what the defense gave us…we ran the ball effectively and we mixed in the pass. We did a great job administrating that.”

Joe Flacco led a nine-play, 55 yard drive in just 1:38 that led to Elliott’s third field goal of the half, his longest that snuck through from 50 yards out. Philadelphia led 16-7 at the break.

Pittsburgh got back into the game with their first drive of the second half. Haskins led an efficient ten play, 75-yard drive. Drawing the Eagles’ D-line offsides on a hard count, Haskins rolled right and hit a wide open Anthony Johnson in the middle of the end zone for a 22-yard touchdown, cutting the lead to two, 16-14.

On the ensuing drive, Jamir Jones came free off the edge to pressure QB Nick Mullens, whose inaccurate throw was intercepted by third-year corner Justin Layne. Pittsburgh got its run game going, a strong push up front with Anthony McFarland and Jaylen Samuels churning from behind. Samuels scored from a yard out to give the Steelers their first lead of the game, 21-16 following Sam Sloman’s extra point. In the third quarter, the Steelers had 12 first downs. The Eagles had none.

The Steelers kept their foot on the gas in the fourth quarter. Starting at their own 20, Haskins and Pittsburgh marched down to the Eagles’ six before the drive stalled. Sloman came on to boot the short, 22-yard field goal to extend the lead to eight, 24-16.

Josh Dobbs’ first drive quickly came and went. On his second play and first pass, he forced a throw over the middle for WR Cody White and was picked by CB Elijah Riley who returned the ball four yards to the Steelers’ 29. But newly signed corner Lafayette Pitts took the ball right back and the Eagles came away empty on their drive. From there, Pittsburgh was able to chew clock with a couple of nice runs from RB Pete Guerriero. A Tony Brooks-James first down on 2nd-and-1 iced the game.

NOTES: Haskins finished the day 16/22, 161 yards and 1 TD…JuJu Smith-Schuster caught three passes for 22 yards in his 2021 debut…Joe Flacco lead the Eagles in passing, going 10/17 for 178 yards and one touchdown…Diontae Johnson had the longest play from scrimmage for Pittsburgh, a 33-yard catch in the first half…Jamir Jones and Arthur Maulet tied for the team lead with four tackles…the Steelers nearly had twice as many plays as the Eagles, 80-42…Pittsburgh will have their only home preseason game next Saturday against Detroit, kickoff is set for 7:30 p.m. EST.