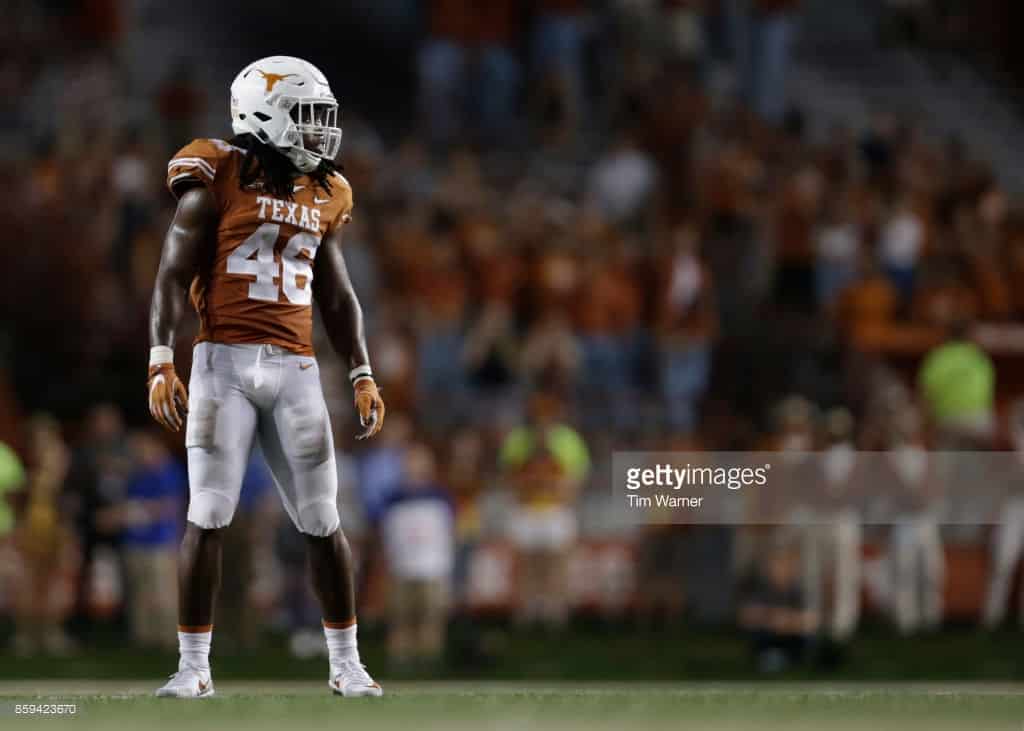 So far we have looked at OLB/EDGE players, tight ends, safeties, tackles, cornerbacks and interior offensive linemen who could be on roster bubbles this year. With the retirement of fan favorite Vince Williams this week we’re going to look at inside linebackers.

There were plenty of questions marks at the position before Williams’s retirement.  Devin Bush is returning from a serious injury but looks ready to go.  Robert Spillane filled in for Bush last year and made some splash plays and definitely looked the part before dealing with injuries of his own. They are the projected starters and have only play eight snaps together in official games so their chemistry may take time to gel.

Buddy Johnson was drafted this season looks like a promising player but having a rookie as the primary back up is perilous. Ulysses Gilbert is entering his third season but has struggled to stay healthy and Tegray Scales saw action in four games last year mostly on special teams. Others include some hybrid safety/linebackers including Marcus Allen and Miles Killebrew.

For this I am thinking each team will carry at least 5 inside linebackers, four on the active roster and one on the practice squad. I focused on factors such as snap counts, the number of games they suited up for and overall depth of the position from unofficial depth charts that included new additions through free agency and the draft. Affordability was also a factor so you won’t see any big names on here.

Each of these players would be capable of fighting for depth positions at inside linebacker.

Giles-Harris is a third year player out of Duke and was a three year letterman and team captain in his senior season.  The two time All-ACC player was very productive totaling 313 tackles, 143 solo, 32.5 tackles for a loss, 8.5 sacks, 2 interceptions , 8 pass breakups, 15 quarterback pressures and one forced fumble and recovery.

He was an undrafted free agent in the 2019 NFL draft and spent his first two season with Jacksonville. In two season there he played in 14 games with 3 starts totaling 204 snaps on defense and 262 on special teams. He has 20 career tackles, 10 solo, 2 tackles for a loss and 1 sack. He was cut in May and signed by the Bills two weeks later.

The Bills added some players in free agency and look to have a solid group led by Edmunds, Klein and Milano as their starters.  Matakevich and Adams are depth along with being quality producers on special teams.

Our profile on Giles Harris

Pierre-Louis had a fantastic career at Boston College filling up the stat sheet.  He was a first team All-ACC player in his senior season and over his career he compiled 360 tackles, 214 solo, 23 tackles for a loss, 8 sacks, one interception returned for a 33 yard TD, 10 pass breakups, 2 fumble recoveries with one returned 96 yards for a touchdown and 1 forced fumble.

He was selected in the fourth round of the 2014 NFL draft by the Seattle Seahawks and played in 34 games with one start in 3 seasons. He also had a pre-draft visit with the Steelers.  From there he has changed teams from season to season going from Kansas City, to the New York Jets, to the Chicago Bears and to the Washington Football Team each for a season. In his career, he has played in 84 games starting 15 while totaling 184 tackles, 125 solo, 8 tackles for a loss, 2 sacks, 1 interception, 8 pass breakups, 2 forced fumbles and 1 fumble recovery.

Houston signed about 30 free agents this off season so they are going to throw everything against the preseason wall and see what sticks. Cunningham and Kirksey should start. Hewitt is veteran depth who had a big season with the Jets last year. Grugier-Hill is a key special teamer as well as depth and Wallow is an incoming rookie. Hardy Nickerson Jr and veteran Joe Thomas are too other names to watch in Houston.

Here is a Dave-Te’Thomas profile on Pierre-Louis

Jefferson was an early entry into the 2017 NFL draft after playing collegiately at the University of Texas. His final season he was a second team All-American, First Team All-Big 12 and the Co-Defensive player of the year.  In his career he totaled 231 tackles, 160 solo, 26 tackles for a loss, 13 sacks, 5 pass breakups, 1 forced fumble and one fumble recovery he returned for a touchdown.

He became a third round pick of the Bengals but the former day two pick has not found his groove in the NFL.  He spent one season in Cincinnati before being waived before the 2019 season.  He was claimed by Cleveland and was there until November 2019 before brief stops with the Chargers, Titans and Chiefs in 2020.  The Colts signed him in May of 2021. He has only 15 snaps on defense but has over 500 on special teams. He has 16 career tackles of which nine were solo.

The Colts tandem of Leonard and Okereke are an impressive pair and Franklin plays in 3 linebacker sets.  Speed is a developmental player and Glasgow is special team’s ace. The Steelers brought in Jefferson for a visit in the pre-draft process.

Our profile on Jefferson

The former California Bear was making a run at the PAC-12 defensive player of the year before an injury cut his final season short.  He played in 40 games over his four years with 20 starts totaling 211 tackles, 110 solo, 14.5 tackles for a loss, 8 sacks, 5 interceptions for 59 yards and one TD along with 2 passes defensed, 3 fumble recoveries and 3 forced fumbles.

He was a seventh round pick of the Minnesota Vikings in the 2018 draft and spent 1+ seasons there playing in 13 games before being cut in September of 2019. He was then signed by the Giants where he played in 23 games with 8 starts including week one in 2020 against the Steelers. In his career he has 37 tackles, 27 solo, 1 pass break up and one fumble recovery. He’s played 232 snaps on defense and 381 on special teams.

Martinez is a tackling machine and Ragland will likely start next to him.  Coughlin is being moved to inside linebacker and Crowder is a good special team player. Roster projections only have the Giants keeping 4 inside linebackers.

A three year starter at Vanderbilt and finished with 40 total starts. He was a co-captain his senior season and showed positional flexibility.  Burks finished his career with 228 tackles, 129 solo, 15.5 tackles for a loss, 4.5 sacks, 5 interceptions for 99 yards and a TD, 21 pass breakups, 2 fumble recoveries including a touchdown and 1 forced fumble.

He was a third round selection in 2018 by the Packers and has spent his three season there. He has played in 42 games with 4 starts totaling 56 tackles, 39 solo, 2 forced fumble and one tackle for a loss.  He has played 275 snaps on offense and 838 on special teams.

Campbell was a free agent addition for Green Bay and a likely starter.  Barnes started 10 games last year and will be a counted upon along with Kamal Martin. Both are second year players.  Summers is a strong special team player and McDuffie is a developmental rookie.

Our profile on Burks

Hicks is the second former Texas Longhorn on this list and he played in 45 games with 28 starts. He was a second team All-American in 2014 and was also All-Academic as well. His totals included 248 tackles, 135 solo, with 22.5 tackles for a loss, 5.5 sacks, 2 interceptions for 19 yards, six pass breakups and 1 fumble recovery.

Hicks was a third round pick by the Eagles and spent his first four season there playing in 43 games with 40 starts having two seasons cut short by injury and ending up in injured reserve. His last two seasons were spent in Arizona starting every game. His statistics include 522 tackles, 352 solo, 34 tackles for a loss and 6.5 sacks. He has 11 interceptions, 29 pass breakups, 3 forced fumbles, seven fumble recoveries and 1 TD.

Arizona drafted Collins to be a starter along with Simmons forming a very good, young duo. Vallejo can be the primary veteran back up and Turner and Smith are important special teamers.  Hicks is unhappy and has avoided team activities and was given permission to seek a trade but if that doesn’t happen they could give him his release.

Before going undrafted in the 2019 NFL draft Reeder was a Blue Hen at the University of Delaware after transferring from Penn State. As a freshman at Penn State he had 66 tackles, 42 solo, 5.5 for a loss, 1 interceptions and one pass break up. In three years at Delaware he had 283 tackles, 133 solo, 25 tackles for a loss, 5 sacks, 4 interceptions, 8 pass breakups, 5 forced fumbles and 3 fumble recoveries.

I surprised myself putting Reeder on this list based on his production but from what I have read the Rams linebacker corps is in flux and just about anybody could be starting for them including Reeder. But on a few roster projections he was on the outside looking in and is always around the ball in the games I have seen.