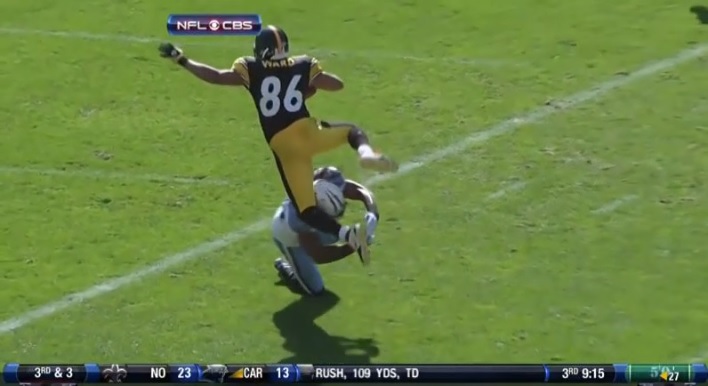 Hines Ward’s 85th and final receiving touchdown came at 35 years old in 2011, his final year in the NFL. His production across the board was the lowest since his rookie year. Ward finished the ’11 campaign with just 46 receptions for 381 yards and two touchdowns. Put it this way. Ward’s 8.3 yards per catch were even lower than JuJu Smith-Schuster’s number last season. With the emergence of Antonio Brown, Emmanuel Sanders, the whole “Young Money” Crew, Ward’s role and playtime shrunk.

Ward’s two touchdowns that season came in the same game: Week 5 against the Titans, a 38-17 Steelers’ win. Ward kicked things off with a seven-yard touchdown catch in the second quarter to put Pittsburgh up 14-3. His second trip to the end zone would ice the game.

On 3rd and 5 from the Titans’ five, Ward ran a slant from a stacked set. The Titans were forced to play off coverage and Ward had a free release, Roethlisberger throwing hot and beating the free rusher off the edge. All in one motion, Ward made the catch, turned upfield, leapt the final Titans’ defender, and rolled his way into the end zone. Pittsburgh went up 28-3 and wouldn’t pull a Falcons, cruising the rest of the way.

This play might not be the perfect epitome of Hines Ward, considering he was willing and able to go through defenders, not just over them. But it shows his willingness to make the play over the middle of the field and his nose for the end zone, running around, through, and here, over, to reach paydirt. All with a smile on his face.

This game would be really the last productive one of his career. He wouldn’t catch more than five passes or 47 yards in a contest the rest of the season and wasn’t targeted in the team’s playoff loss to the Denver Broncos. He did reach 1,000 career receptions, a manufactured pass to get him the ball and that milestone. But this Titans game was the last “classic Ward” one for him. For those couple of quarters, it was vintage #86, and capped off a terrific Steelers’ career.