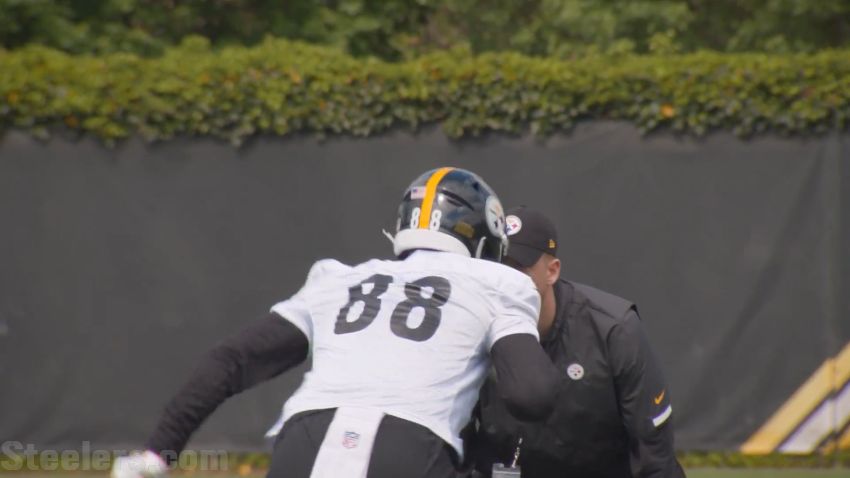 Ever since the Pittsburgh Steelers made him the 55th pick of this year’s draft, I’ve tried to temper expectations for Pat Freiermuth’s rookie year. I’d argue tight end is the second-hardest position for college guys to make the jump from, only trailing quarterback. To be fair, Freiermuth is more well-rounded and developed than a lot of college tight ends, who rarely put their hand in the ground and haven’t lined up as an in-line “Y” (Freiermuth has done both).

But to really answer that question, we have to look at some history. What do the numbers suggest? That’s what we’ll do with this study. From 2010-2020, we’re examining the production of all tight ends drafted on Day 2, like Freiermuth was, second or third round. We’ll see what they did as a rookie and how much of a jump there was in year two. Is there a true “sophomore leap?”

Over that span, 46 tight ends were drafted on Day 2. For the purposes of our study as to not greatly skew the numbers, we’ll exclude years of players who missed due to injury. Guys like Travis Kelce, who missed most of his rookie season with a knee injury. Or second-year production like Josh Oliver, who missed his entire sophomore season. With a relatively small sample size, including those zero stat lines would throw off our numbers a bit.

So here are the facts. This chart shows the first-year versus second-year production of the qualifying tight ends. Receptions, yards, and touchdowns.

Fairly light production as a rookie. 21 receptions, 250 yards, and two touchdowns. Compare that to sophomore years which averaged 38 receptions, 449 yards, and nearly four touchdowns. Sizeable jumps across the board. Let’s quantify that.

So a nearly 80% increase in receptions and yards in year two compared to year one, and a two-thirds jump in touchdowns.

Here’s an example of some tight ends whose production shot up in year two.

Because I’m all about context and relativity, I wanted to make a baseline comparison to other skill positions, running back and wide receiver. Do those positions have similar increases? Is this a product of just rookies being rookies across the board? I looked at just a three-year window, 2017 to 2019, but there are more runners and receivers drafted so the sample size isn’t tiny. Here’s how they stack up.

So tight ends by far have the biggest increase in sophomore year production in receptions and yards. Running backs have a slightly higher number in touchdowns. Overall, backs and receivers don’t make nearly as big of a “jump” in year two, suggesting less of a learning curve and backing up my hypothesis.

All of this is to say what I’ve been preaching for the last six weeks. Barring a significant injury to Eric Ebron, Freiermuth isn’t going to stuff the stat sheet as a rookie. Especially a true junior who played just four games last season.

Honestly, the average rookie tight end line of 21/250/2 sounds just about right for a guy like him. That doesn’t mean he’s incapable of contributing in other ways, he might already be the best blocking tight end on the team or at least neck-and-neck with Kevin Rader, and a quiet rookie year doesn’t guarantee a quiet NFL career. The goal is to get his feet wet this year, play 450-550 snaps, and be ready to take over as the starter for 2022. That’s an extremely realistic outlook.