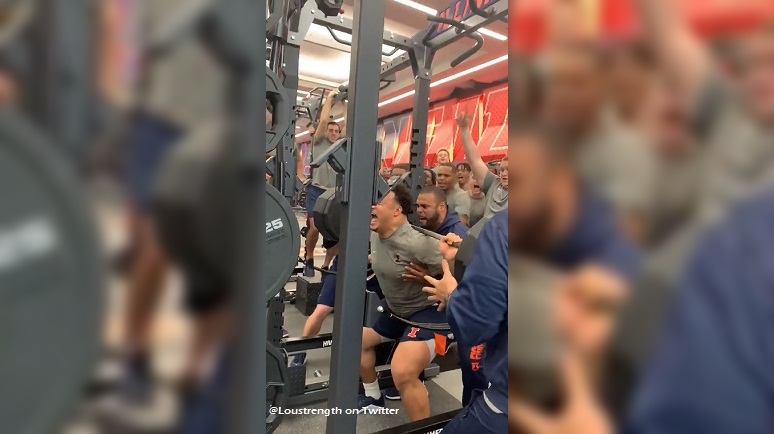 On Saturday, an older video of Pittsburgh Steelers center Kendrick Green resurfaced on Twitter and it shows him squatting an impressive amount of weight while at the University of Illinois. In fact, it was evidently 700 pounds, and it was posted in March by Lou Hernandez, who is the strength and conditioning coach at Illinois.

“I’ve definitely evolved, I would say that,” Green said ahead of the draft. “I just learned a lot, and that comes with time. I learned a lot of things you know about myself, just being mature being out here on my own.”

Green talked about what he thinks he brings to the Steelers after being selected in the third round by them.

Green certainly isn’t the biggest center in this year’s draft class, but he might be the most athletic one and he does excel in zone blocking and at getting up to the second level. The Illinois product also plays with a mean streak, according to what new offensive line coach Adrian Klemm indicated after the draft.

“I am really excited about KG. He is a guy we had our eye on,” Klemm said after the selection of Green in the third round of the draft. “We love the way that he plays in terms of what we’ve been talking about, in terms of changing our demeanor and the attitude that we want to carry onto the field. He embodies all of that. He has great leadership qualities. He was the alpha in that program. He is just a tremendous player. He can do it all. The pulls, physical in the run game, pass protect. All of those things.”

Green is the favorite to be the Steelers starting center in 2021 and thus beat out B.J. Finney for the job after veteran Maurkice Pouncey retired earlier in the offseason. Green, by the way, will wear the same number that Pouncey wore since 2010 when he was acquired in the first round of that year’s draft out of Florida.

“I wore No. 53 since high school. Obviously, at Illinois, I wore it as well, so I kind of requested it,” Green said of wearing Pouncey’s former 53 number. “I got big shoes to fill. I’m gonna work toward that.”