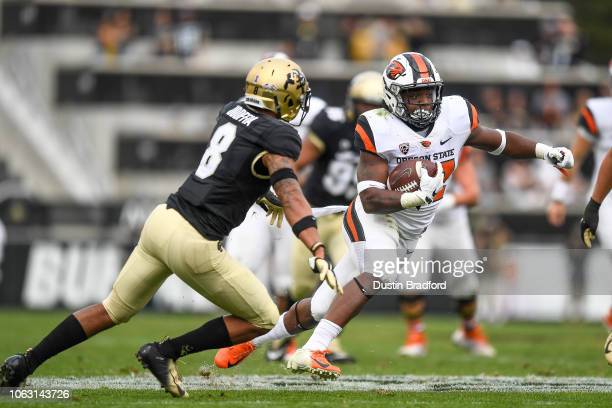 Oregon State running back Jermar Jefferson says he had a meeting with the Pittsburgh Steelers a couple weeks ago. Jefferson passed along the news during his Thursday Pro Day press conference. Jefferson says he can’t remember who he met with but called it a great meeting.

Jefferson had three impressive years with the Beavers. For his career, he rushed for over 2900 yards and 27 rushing touchdowns. In 2020, he averaged over 6.5 yards per carry with seven scores. He also had 43 receptions over his career. Jefferson declared for the draft after his junior season.

Jefferson says OSU’s offense was an inside zone/gap scheme early in his career. For 2020, they switched to a wide zone system. He said he had a little bit of trouble making the adjustment but put in extra work with coaches until things clicked.

“Outside zone was just having a correct aiming point [butt of the tight end],” he said. “I used to mess up my aiming point a lot. I used to take it too wide or too close. So this past year I worked on my aiming point a lot. Another thing is my eyes to having my eyes in the right place, who I’m reading on wide zones. I struggled with that a little bit. But this past year me and [RBs Coach Michael Pitre] met a lot and it became one of the easiest runs I do.”

Based on media mock drafts, NFL Mock Draft Database has him aggregated as a 6th round pick. The Steelers are almost certain to take a running back long before that, however. Double-dipping at the position is also unlikely. Pittsburgh has shown the most interest in Alabama’s Najee Harris and Clemson’s Travis Etienne.

Check out our scouting report on Jefferson at the link here. Our Tom Mead praised his patience and vision while questioning his contact balance and pass protection technique. Here’s how he summed up Jefferson’s game.

“I think he can be a number two back in a Zone or Gap scheme on early downs initially and if he can be coached up in the passing game he can be used on passing downs down the road.”