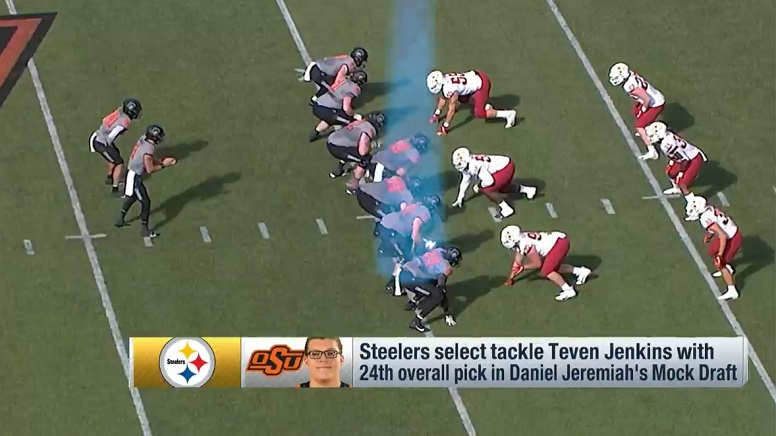 NFL Network draft analyst Daniel Jeremiah has spoken. Jeremiah released his final 2021 mock draft on Wednesday, and he has the Pittsburgh Steelers selecting Oklahoma State tackle Tevin Jenkins with the 24th pick in the first round.

“There’s a lot of buzz about Najee Harris going to the Steelers, but Pittsburgh opts to fill a hole on the front five before finding a running back to help an offense that ranked last in rushing in 2020,” Jeremiah wrote about his mocked selection of Jenkins to the Steelers.

Jeremiah also talked about mocking Jenkins to the Steelers during a quick video recap of his picks, as well, on the network.

“I hear the Najee Harris stuff,” Jeremiah said. “I think he fits there, but this offensive line lost three starters, they’ve got to redo some stuff up front.”

Throughout the pre-draft process, Jeremiah has been very consistent when it comes to mocking a tackle to the Steelers in the first round of the 2021 NFL Draft. In his three previous mock drafts, two of them, his first and third offerings, included Jenkins as the Steelers’ selection. In his second mock draft of 2021 that was released in the middle of February, Jeremiah had the Steelers selecting Michigan tackle Jalen Mayfield.

We shall see how close Jeremiah’s final mock draft of 2021 is to the real thing less than 24 hours from now.