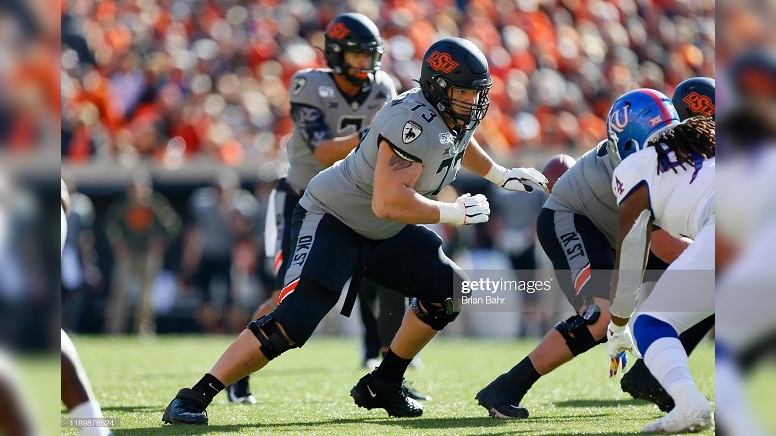 While the 2021 mock draft season has been underway for several weeks now, one could say it officially started on Friday upon Daniel Jeremiah of the NFL Network releasing his first offering of the first-round. In his first mock of the first-round of the 2021 NFL Draft, Jeremiah has the Pittsburgh Steelers selecting Oklahoma State tackle Teven Jenkins 24th overall.

Here is what Jeremiah offered as a reason for mocking Jenkins to the Steelers in the first-round at 24tyh overall.

“The Steelers’ inability to run the football last season was a major problem. They could take a runner here — I love North Carolina’s Javonte Williams and Alabama’s Najee Harris — but I think they will address the offensive line instead. Jenkins plays with an edge (see what he did against Texas) and would provide some youth/athleticism to Pittsburgh’s aging group.”

Not bad reasoning from Jeremiah overall. after all, there’s a chance the Steelers will be looking to draft at least one tackle this year and especially if starting left tackle Alejandro Villanueva decides to retire this offseason or sign elsewhere as an unrestricted free agent.

Jenkins, who decided to opt out of the remainder of the 2020 college season to prepare for the NFL draft back in late November, made that announcement after he was injured against Oklahoma and failed to play the following week against Texas Tech. At the time, Oklahoma State head coach Mike Gundy said that Jenkins, a 6-foot-6, 320-pound senior, was dealing with back pain.

Jenkins was a 2020 preseason All-Big 12 selection. He started six games at right tackle and one game at left tackle in 2020 before deciding to opt out. He also started all 12 games in 2019 in addition to starting all 13 games as a sophomore. Jenkins played in all 12 games as a freshman in 2017 as well.

Most of Jenkins’ college starts came at right tackle but he did log quite a bit of playing time at left tackle as well throughout his college career. He is currently ranked fourth overall at the tackle position by Pro Football Focus as the month of January starts winding down.

Obviously, we’ll have a full scouting profile on Jenkins on the site in the coming weeks. In the meantime, however, with Jenkins being widely considered as one of the top tackles in the 2020 draft class, he’s a name to remember as a distinct Steelers draft prospect as the offseason rolls on.