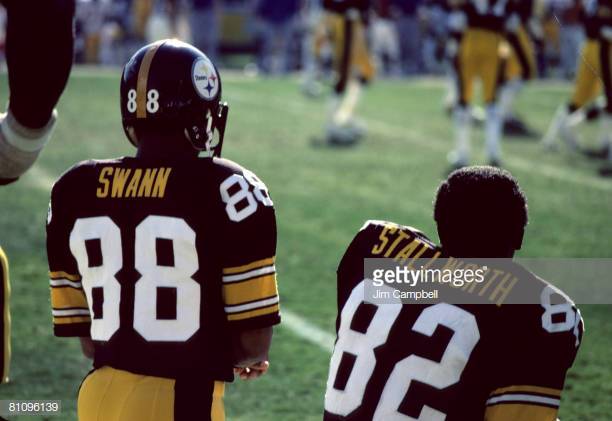 When Dave Bryan, David Orochena, and I hung out at the Pro Football Hall of Fame two weeks ago, walking through the mesmerizing Hall of Busts, it got me to thinking.

How many Steelers have been inducted into Canton’s doors who only ever played for the Steelers? And does any team have more?

Dave, David, and myself quickly rattled through the list of Steelers. One that excludes guys like Mike Webster, who finished his career in Kansas City, Franco Harris and his one, sad year in Seattle (this photo still just feels weird) and Alan Faneca, who spent a chunk of his career playing elsewhere.

How does that compare to the rest of the league? I went through each organization’s Hall of Fame list to find out. Here are the clubs with 10+ Hall of Fame players who never played elsewhere.

So the Steelers are second in NFL history only behind the Chicago Bears, who got a 13-year head start on Pittsburgh. It’s no surprise to see some of football’s oldest franchises, the Bears, Steelers, and Packers rank among the top five. But Pittsburgh is unique in one way. For those other four teams, most of their names come from before the merger. Guys who played in the 20s, 30s, 40s, 50s, and 60s. Not taking away anything from those guys, you know I love football’s history. But if you look at teams who have the most Hall of Famers with one club since the merger, the list dramatically changes.

Here’s how that list looks of players drafted since 1970. So for the Steelers, that excludes Butler, Stautner, and Greene, who missed the cutoff by one season.

The Steelers are far and away the top team with more Hall of Famers post-merger than second and third place combined. That’s largely thanks to the 70s dynasty where the majority of these names come from. The rest of this list changes too. The Bears are the only team of that first, overall list to appear on this one but a whopping 14 of their 17 players came pre-merger. So did 9 of the Lions’ 11, 9 of the Browns’ 10, and all ten of the Packers’ players.

In the free agency era where it’s tougher more than ever to retain players for their entire career, the Steelers will hope to add a few more names to their list over the next decade. Ben Roethlisberger will of course be one of them. Maurkice Pouncey could be another and hopefully Cam Heyward is eligible for this category by the time his career comes to an end.

What does all this mean? Absolutely nothing. Players don’t even technically go in under a team like they do in baseball. If anything, this just gave me an excuse to answer the question I asked Dave and David. And given their storied history, it’s no surprise to see the Steelers at or near the top of these lists.