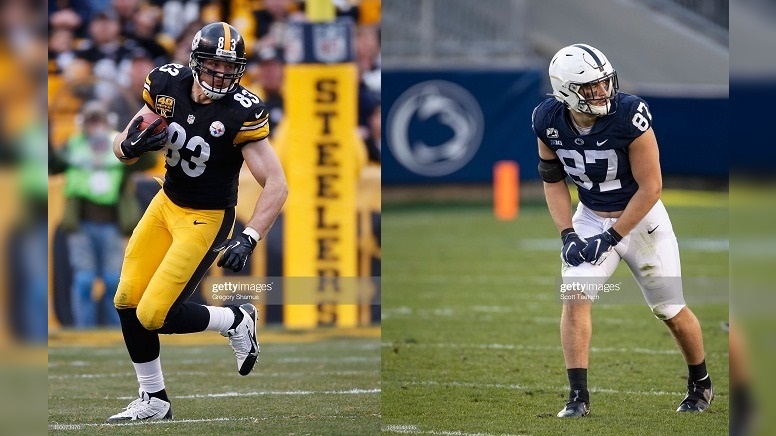 Penn State held their 2021 pro day on Thursday and not surprisingly, Pittsburgh Steelers head coach Mike Tomlin and general manager Kevin Colbert were both on hand to observe it. Not only that, but new Steelers tight ends coach Alfredo Roberts was at the Penn State pro day as well and he was the one who put tight end Pat Freiermuth through his on-the-field drills workout. Do the Steelers have eyes on drafting Freiermuth this year? If they do, Greg Cosell, a longtime NFL analyst and a senior producer at NFL Films, believes they just might have the second coming of another tight end they drafted several years ago in the first round.

“You know who he kind of reminded me of? Heath Miller,” Cosell told Ross Tucker of Freiermuth on a recent episode of his podcast. “And Heath Miller played 11 years with the Steelers, finished with almost 600 receptions, really solid tight end. I believe he was a first-round pick when he came out of Virginia. I think Freiermuth is a really good prospect. He’s got size. He’s got route running ability. He’s got hands. He’s got competitiveness. He’s not a phenomenal blocker, I think he needs to improve in that area, but he’s good enough.”

While Freiermuth isn’t as good of a blocker as former Steelers tight end Heath Miller was when he came out of Virginia several years ago, Cosell believes the Penn State product will get better in that area of his game once he gets in the NFL.

“He’ll get better in that area, because I think he has want-to and commitment,” Cosell said of Freiermuth.

Cosell also went on to reveal other areas where he thinks Freiermuth will eventually excel at in the NFL as well.

“I think he’ll be a guy that’s very effective at the next level on third down and in the red zone and we know how critical those two situations are,” Cosell said. “I think he can be a boundary X, but I think that that’ll require some work. I think you’ll see him there as he gains experience, but I think he’s a really solid prospect. Not a special prospect, but my guess is you can line him up for 10 years.”

Cosell went on to liken Freiermuth’s situation to that of Philadelphia Eagles tight end Zach Ertz.

Those are some strong comparisons Cosell made when talking about Freiermuth, who he essentially has as his second-rated tight end in this year’s draft class behind Florida’s Kyle Pitts. Freiermuth’s current draft value is probably around the bottom of the first round to the middle of the second round and that might mean the Steelers would need to select him before their 55th overall selection in the second round if they really want him.

The Steelers could certainly use another good tight end this year and especially with Vance McDonald retiring earlier this offseason and Eric Ebron, who is not much of a blocker, now technically in the final year of his current contract. The Steelers tight end depth chart behind Ebron right now includes a lot of unproven players that lack much upside.

The Steelers drafting Freiermuth this year, and even in the first round, shouldn’t come as a big surprise if it ultimately happens and especially if the team doesn’t sign a veteran tight end such as Jesse James ahead of the selection process taking place.

“I think he’s a really solid prospect,” Cosell reiterated to Tucker of Freiermuth.