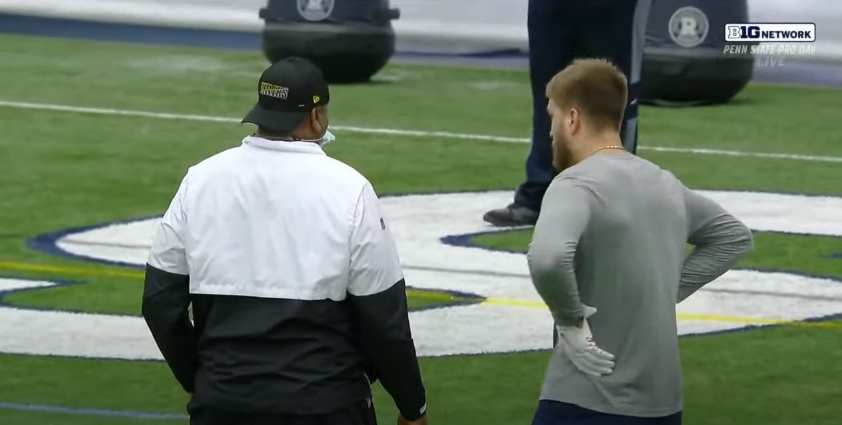 We already knew Mike Tomlin and Kevin Colbert were attending Penn State’s Thursday Pro Day. Now we know the third and final member they brought along. That was TEs Coach Alfredo Roberts, who put Pat Freiermuth through drills and routes during his workout.

Here’s Roberts putting him through routes.

And I don’t mean to put too much stock into body language but Roberts seemed pretty happy with how Freiermuth performed. Here’s how the workout ended, a big embrace from the team’s position coach.

Based on body language alone, sure seems Steelers' TE coach Alfredo Roberts was happy with Pat Freiermuth's workout. Put him through a ton of drills/routes. #Steelers pic.twitter.com/YjBVrz9Kww

In his press conference following his workout, Freiermuth said Roberts is “his guy” and they’ve met several times already. He also confirmed he met with Mike Tomlin and Kevin Colbert a few days ago.

“That’s my guy. Me and him have a really good relationship so far. We’ve met a couple times. We’re going to continue to meet. He’s a great guy and someone that I’d love to play for….I’d be very happy to join their organization.”

He said it meant a lot to have him, Tomlin, and Colbert on-hand.

“I met with them a couple days ago. It was a really good meeting. It was awesome to see them there.”

That’s a lot of attention on one man. Freiermuth is generally considered the second best tight end in this class only behind Florida’s Kyle Pitts. A two-time captain for the Nittany Lions, he compiled 92 career receptions for 1185 yards (12.9 YPC) with 16 touchdowns. In just four games in 2020, limited by a shoulder injury, he caught 23 passes for 310 yards and one score.

In our scouting report, our Wesley Cantliffe summed him up this way:

“Like any player, Pat Freiermuth currently has both strengths and weaknesses.  However, his strengths stand out more, and this makes it easy to pick at small details when discussing his weaknesses.  Overall, he is a well-rounded player with a massive amount of potential at the NFL level.

I think a fit with the Pittsburgh Steelers would make sense as long as they believe in his foundation as a blocker.  He seems to check some of the boxes that the Steelers look for when it comes to draft evaluation.  He is reported as being a person of high character with an impressive work ethic.  Due to the state of the Nittany Lions in 2020, I could see Freiermuth fall to the early second round, but I do believe he should be a late first-round selection.”

Freiermuth falls in a bit of a gray area. Is he worth the value at #24? If the answer is no, what are the odds of him falling to #55? It’s tough to see him slip that far. But with Mike Tomlin, Kevin Colbert, and the position coach at his Pro Day, Freiermuth is a name that should be on Steelers’ fans radar. Even at #24.