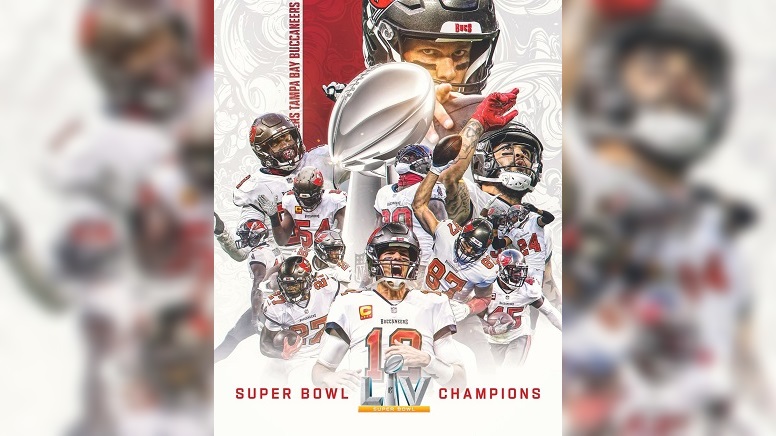 The Tampa Bay Buccaneers are now World Champions of the 2020 NFL season as they beat the Kansas City Chiefs 31-9 Sunday night in Super Bowl LV at Raymond James Stadium in Tampa, FL.

The Buccaneers, who entered Sunday night as 3.5-point underdogs to the Chiefs, overcame a 3-0 Kansas City lead in the first quarter and never looked back on their way to winning a second championship for the organization. Buccaneers quarterback Tom Brady was named Super Bowl LV MVP after completing 21 of his 29 total pass attempts in the game for 201 yards with three touchdowns and no interceptions. Brady has now been named Super Bowl MVP five times in his career and he’s no won seven Super Bowls.

Of Brady’s three touchdown passes Sunday night, two went to tight end Rob Gronkowski and the other went to wide receiver Antonio Brown. Gronkowski finished with six catches in the game for 67 yards while Brown caught five passes for 22 yards.

The Buccaneers running game was also very successful Sunday night against the Chiefs as running backs Leonard Fournette and Ronald Jones combined to rush for 150 yards and a touchdown on 28 total attempts. 27 of Fournette’s yards came on third quarter touchdown run that put the Buccaneers up 28-9.

The Buccaneers defense also played a huge part in the team’s Sunday night Super Bowl win as the unit harassed Chiefs quarterback Patrick Mahomes with pressure all night in Tampa. Mahomes, who finished Sunday’s game having completed just 26 of his 49 total pass attempts for 270 yards with no touchdowns and two interceptions, was sacked three times by the Buccaneers defense.

Leading the way for the Buccaneers defense Sunday night was linebacker Devin White, who had 12 total tackles in the game. Two resulted in losses and he also had an interception and a pass defensed. Defensive end Shaquil Barrett also had a strong Super Bowl as he had a sack, four quarterback hits and several pressures in the contest. Defensive tackle Ndamukong Suh also had a nice game against the Chiefs as he was credited with 1.5 sacks and two total tackles.

After the Chiefs took a 3-0 lead with 5:10 left in the first quarter, the Buccaneers offense got on track and drove 75 yards in eight plays and 4:33 for their first touchdown, an 8-yard pass from Brady to Gronkowski. Brady then hit Gronkowski for a 17-yard touchdown pass with 6:05 left in the first half to close out a six-play, 38-yard drive that followed a bad punt by the Chiefs from deep in their own end.

While the Buccaneers did surrender another field goal to the Chiefs with 1:01 left in the second quarter, the team’s offense was able to answer those points with a five-play, 71-yard touchdown drive that culminated with a short Brady to Brown touchdown pass with six seconds left in the first half. That drive was aided by a huge 34-yard pass interference penalty on Chiefs cornerback Bashaud Breeland on a throw down the left side of the field from Brady to wide receiver Mike Evans.

After building a 21-6 halftime lead, the Buccaneers were never really threatened in the second half. While the Chiefs were able to manage a third field goal from 52 yards out by kicker Harrison Butker with 11:26 left in the third quarter, the Buccaneers answered those points with another touchdown drive of their own, which culminated in the 27-yard run by Fournette. Later in the third quarter, a 52-yard field goal by Buccaneers kicker Ryan Succop closed out the game’s scoring and put Tampa up 31-9.

The Buccaneers are now Super Bowl champions for just the second time ever. Their previous Lombardi trophy win came in Super Bowl XXXVII in January of 2003 against the Oakland Raiders at Qualcomm Stadium in San Diego, CA. The Buccaneers finished the 2020 regular season with an 11-5 record. They then proceeded to beat the Washington Football Team in the Wild Card Round, the New Orleans Saints in the Divisional Round, and the Green Bay Packers in the NFC Championship Game to advance to Super Bowl LV.