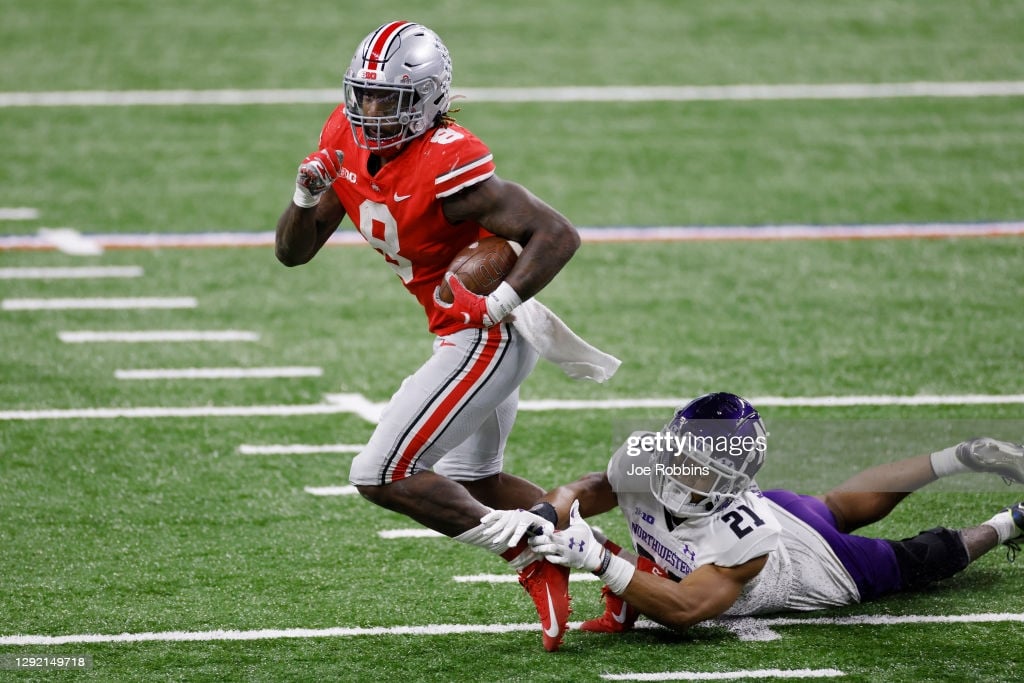 The NFL Draft will look a lot different this year. Even moreso than the chaos and uncertainty that was 2020. But we’ll still do our best to cover April’s draft from every angle possible. Steelers Depot isn’t officially at the 2021 Senior Bowl this season (though our Devin Jackson is credentialed virtually) but we’re still able to offer commentary on what’s happening down in Mobile, Alabama this season.

Today kicked off the week with Tuesday morning weigh-ins. Draftniks can certainly overreact to things like these but every piece of information is going to be valuable in a year like this, especially when there’s no Combine to give us a full list of weigh-in results.

So let’s go over some of the notables of today’s weigh-ins.

– One player I’ll be spending a lot of time watching over the next couple of days is Clemson WR Amari Rodgers. Breakout year in 2020, catching 70 passes for over 1000 yards and seven touchdowns for the Tigers. Potential slot replacement if the team loses JuJu Smith-Schuster. He isn’t as tall but stockily built at 5’9/4, 211 pounds. Though he’s short, he has the same hand size (9 1/2 inches) as UAB’s Austin Watkins, who measured in four inches taller.

– I was actually happy to see Virginia EDGE Charles Snowden come in a little shorter than listed. Not often you’re excited about someone being smaller than their bio. Listed at 6’7, he still weighed in at 6’6/2, 232 pounds. Will definitely need to add weight to fill out his frame but being shorter will help with leverage and bend, though at 6’6, he’s still an unusually tall pass rusher. Especially for something like the Steelers’ scheme. May ultimately fit better playing with his hand down.

– Louisiana’s Elijah Mitchell certainly has the profile of a Steelers’ back. 5’10/2, 215 pounds. Pittsburgh surely got familiar with him after scouting and drafting Kevin Dotson last season. In 2019, Mitchell ran for over 1100 yards behind Dotson and Robert Hunt, a 2nd round pick of the Miami Dolphins.

– Heaviest player in Mobile and potentially this side of the Mississippi? That goes to Alabama guard Deonte Brown, tipping the scales at 364 pounds. In our scouting report, we noted he had weight concerns early in his college career. He seemed to make strides to shed some weight but after being listed at 350 on Alabama’s website, coming in 14 pounds heavier isn’t a great sign. Dude can still drop 20-25 pounds and still be the largest human on the field. Some o-line guys I really respect are high on Brown but I don’t see it.

– Not a guy I know a lot about but read some buzz on East Carolina left tackle D’Ante Smith. His ECU bio had him at just 274 pounds but he came to Mobile much heavier at 294 pounds. Still weight to add on his 6’5 frame but blessed with rare, 35 1/4 inch arms, he’s someone who could generate buzz throughout the draft process.

– Several Alabama linemen in Mobile, not an uncommon sight this time of year. OT Alex Leatherwood, a popular name for #24 (including in our own mock draft) checks every physical box: 6’5/1, 312 pounds with an 85 3/8 wingspan and 34 3/8 inch arms. He began his college career as a guard but will certainly begin his pro one at tackle. Potentially in Pittsburgh.

– Still a big fan of Leatherwood’s teammate Landon Dickerson but as we suspected in our scouting report, he doesn’t have long arms on his 6’6 frame. 32 1/2 inch length is poor for someone several inches shorter. What is long are his medical concerns (he won’t participate in practice this week due to the torn ACL he’s coming off) which probably will cause him to drop. But on tape, he’s a mauler and lot of fun to watch. Could see him as a Steelers’ target in Round 2 or 3 if doctors give the all-clear.

– Something about a Tennessee linemen. Seems like every one of those dudes is build like a house. Trey Smith next in line coming in at 6’5/4, 331 pounds with 33 3/4 inch arms.

– Long snapper alert! Alabama’s Thomas Fletcher is the top guy in the class. Thought maybe the Steelers could look at him given that Kameron Canaday did not have a great year the way the Steelers drafted Colin Holba who ended up being beaten out by Canaday in 2017. But I remember the Steelers’ touting Holba’s size (6’4, 248) and 33+ inch arms as assets and one reason why the team took the chance drafting him. Fletcher isn’t nearly as big at 6’1, 237 with just 31 1/2 inch arms. I’ve never been so letdown by a long snapper weigh-in in my life.

– Ohio State’s Trey Sermon fits Pittsburgh’s “big back” mold. 6’0/2, 213 pounds. He won’t practice this week due to a shoulder injury suffered in the National Title game but it’s still good to be down in Mobile and interview with scouts and coaches. That won’t happen at the Combine this year and who knows what Pro Days will look like in terms of player/team interaction.

– Senior Bowl always makes sure to invite some big “new age” cornerbacks who are popping up more and more. One of the biggest is Minnesota’s Benjamin St. Juste. 6’3/3, 200 pounds with 32 inch arms. Pretty impressive.

– Oklahoma center Creed Humphrey has the height and weight (6’4/5, 312 pounds) but those 31 3/4 inch arms do him no favors. Either he’s T-Rexy or the weigh-in short-changed him. Sometimes Combine and Pro Day results do have different data so something to keep an eye on for his Sooners’ Pro Day later this year.

– Not someone I’ve watched yet but the Steelers have one OT from Western Michigan. Could make it two with Jaylon Moore. Three-year starter, listed at 6’4/1, 311 pounds with 33 3/8 inch arms. Borderline if he can stay at tackle with that height/size but if the dude can play, he can play.

– Dave Bryan posed the question on yesterday’s podcast. How many 5 techs are there in the draft? The Cam Heyward/Stephon Tuitt-built guys who could/would kick inside but are the 6’5, 300, 33+ inch arm prospects? Basically none of them.

Only two other defensive linemen crack the 290 scale: Washington’s Levi Onwuzurike and Texas’ Ta’Quon Graham, who each just hit that 290 mark.

Sure, some of those defensive linemen are rush ends or EDGE guys but this just shows how much the game was become focused on quickness and pass-rush ability over size, length, and taking on blockers.