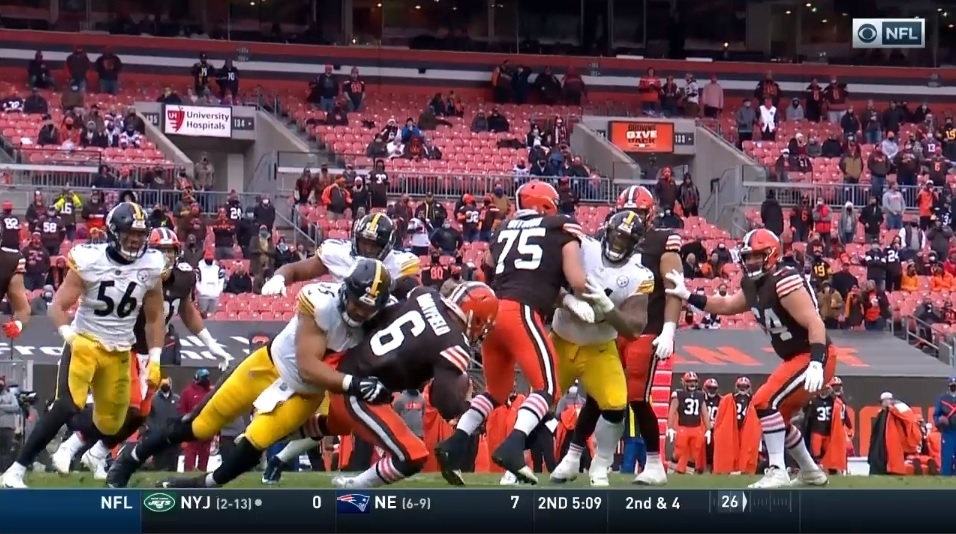 This offseason the Steelers pulled off a rare inter-division trade that included sending the Baltimore Ravens a 2021 fifth-round draft pick in return for the Ravens’ 2021 seventh and defensive end Chris Wormley. It speaks to what Baltimore thought of Wormley to be willing to send him to a rival in  Pittsburgh at such a low price.  So while the Steelers needed defensive line depth badly, you couldn’t expect much star power from him at the end of the day.

In the season finale, in place of Cameron Heyward, Wormley was finally able to log over 50% of the snaps for the first time all year. While he certainly impressed against the Cleveland Browns, the box score doesn’t fully reflect his performance only showing one sack and 2 total tackles. So, let’s dive into the All-22 and take a deeper look at Wormley’s game.

Watching all 41 of Wormley’s snaps from Sunday helped me realize he definitely isn’t a guy that has a ton of juice. A good depth guy, but not someone you want as a your starter for 16 games. With that being said, he showed some good things.

Here, he shows a quick get off on a play-action stretch play. For reasons unbeknownst to me, the tight end blocking Wormley leaves to block Alex Highsmith off the edge. Wormley then has a clear path to the quarterback for his first sack of the season.

While not the most impressive sack in the world you can see Wormley’s quickness that made him a mid-round draft pick out of Michigan.

Below may be Wormley’s most impressive pass rush rep of the day. He starts at the outside shoulder of the guard and then rips inside. He gets an arm on the quarterback but ultimately the full sack was awarded to Highsmith. In my book (not on the stat sheet) this sack is ultimately on Wormley, a great rep.

Here’s another impressive pass rush from Wormley. He starts with a bull rush and then shrugs the Browns guard to the side. It’s possible this would have been another sack from Wormley, but almost the entire defensive line beat the man across from them for a meeting at the quarterback.

This following clip you can start to see some of Wormley’s strength. He comes out of his stance a little high but is able to utilize his strength with a punch to the guard’s chest and then again using his burst inside to win the rep. Ultimately, it forces Baker Mayfield out of the pocket and make sideline throw on the run. This also, is likely another hold that was not called by the refs Sunday.

On the same drive, Wormley and Tuitt stunt. After the center passes Wormley off to the guard, you can again see his strength, as he pushes the lineman into the lap of Mayfield. It forces a bad throw from the quarterback, but the receiver is able to make a phenomenal catch for the first down.

This rep from Wormley is my favorite play from him all day. He makes quick work of the Browns first-round left tackle, Jedrick Willis, with a swim move. This blows up the whole play because the pulling guard has to take Wormley and it also causes the running back to stop and slide outside. To meet him is  a host of Steelers defenders.

One thing that is extremely important if you plan to stick around in this Steelers defensive lineman room is hustle. Wormley threw his hat in the ring for this too. Wormley continues to try to fight through the line the entire rep and then fights through a small hold to chase down Mayfield. Don’t tell Wormley this game doesn’t matter.

While Wormley had a solid day it wasn’t perfect. You could see his day get stronger as it went along. This is one of the first plays of the game and you can see Wormley easily get sealed by the tackle. The seal creates a massive hole for the running back and leaves Minkah as a deer in the headlights. Luckily, Highsmith’s effort minimizes this run as there was ton of space to work.

Coming into an offseason that has a lot of questions, a depth guy in a contract year, like Wormley, has everything to prove. A game like this sticks in your mind when looking at who to resign in the offseason. You’d have to assume a guy like Wormley isn’t going to demand a ton in the open market. When comparing him to a guy that was traded for a in a similar context, like Nick Vannett in 2019, you’d have to think Wormley is a great candidate to resign with a team-friendly deal in 2021. With what he showed against the Browns, I’d sign off on that.