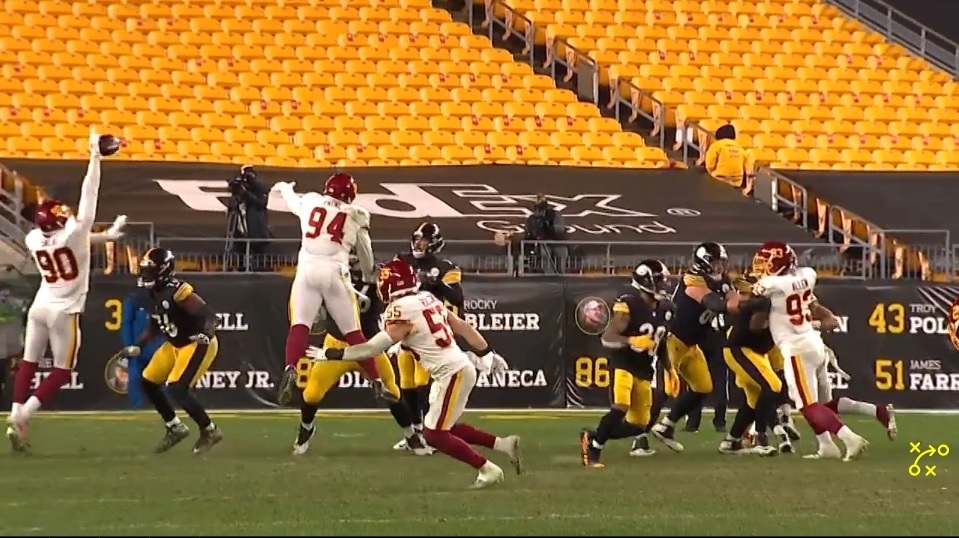 Is the Pittsburgh Steelers’ offense too predictable? Washington seems to think so. After the game, multiple Washington players said they had a good read on what the Steelers were trying to do.

After the Steelers’ 23-17 loss, NFL Network’s Aditi Kinkhabwala tweeted Montez Sweat and Chase Young knew what plays Ben Roethlisberger was going to run. Young cited watching the Steelers’ game against the Baltimore Ravens to get a good feel for Pittsburgh’s tendencies.

Sweat’s “I knew it” moment is referring to his fourth quarter deflection leading to LB Jon Bostic’s game-clinching INT. It was one of three pass deflections Sweat had against Ben Roethlisberger Monday evening. On the play, the Steelers were running a slant/flat concept out of a 2×2 formation. Sweat’s deflection landed in Bostic’s hands with two minutes to go.

After the game, Young expanded on his comments about Baltimore exposing the Steelers’ offense.

“Really a lot. Schemes, certain guy’s tendencies,” Young said via NBC Sports Washington. “I would say tendencies of the offense and certain things they like to do out of different looks Baltimore executed on. I feel like we did too.”

And Sweat said he felt like he was getting under Roethlisberger’s skin. From John Keim post-game.

After one of his tipped passes, Roethlisberger said something to Sweat.. Told him it was a good play.
"He was a little frustrated; you could tell in his demeanor. … Could tell we was getting under his skin."

By now, defenses know at a general level what the Steelers’ offense is going to do. Throw the ball an obscene amount, 40+ times in five straight games, with three step drops and quick passes to get the ball to receivers in space. Ben Roethlisberger hasn’t been sacked since Week 8, in part because he gets the ball out of his hand quicker than any other quarterback in football. Pass rushers are now adjusting.

Sweat is far from the first player to anticipate a play like this. Here’s an example of it from Week 8. Watch Bengals’ LDE Sam Hubbard not even attempt to rush here and nearly come away with the interception.

And I could – and might later in the week – add several more examples.

This philosophy has been key to the Steelers’ offensive success. It’s about the only successful element of it the last several weeks. The run game has gone nowhere and the deep ball is far too inconsistent. And now defenses are keying in on the one thing that’s working, the quick game, and the offense is feeling the negative consequences of that.