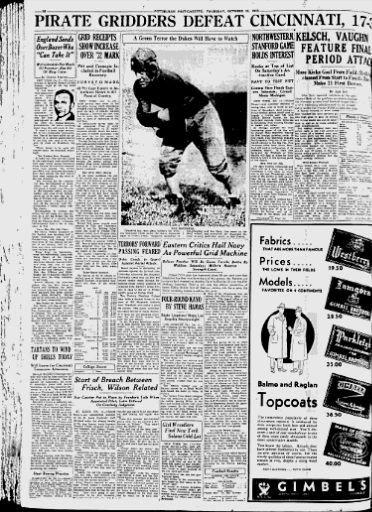 The NFL is doing their best to keep me busy with these “last time the Steelers played a game on this day” articles. First it was Tuesday. Now it’s Wednesday. Believe it or not, Week 12 won’t be the first time in Pittsburgh history their football team played in the middle of the week. But you have to go back a long ways to find the last occassion.

In fact, you have to go all the way back to 1933. The team’s first season. A time when they were still called the Pittsburgh Pirates, their name for their first seven years. A common tactic by football teams to borrow a familiar last name from their popular baseball counterparts. For the first four games of the year, Pittsburgh played on Wednesdays before switching to Sunday for their final home game against Brooklyn.

Pennsylvania laws basically forced their hands. Due to what’s called “blue laws,” a catch-all term for quirky laws and restrictions of weekend activity. You may think they’re a relic of the past but some blue laws still exist today. It’s why you can’t buy a car on Sunday in the Keystone State.

And there once was a time where sports were illegal – Footloose style – on Sundays.

In fact, the reason why the Eagles’ Bert Bell and Steelers’ Art Rooney decided to buy NFL franchises was from the understanding those blue laws would be repealed later in 1933. Legislation was passed in April of ’33 and the laws were officially repealed November 7th. News of the change made the front page of the Post-Gazette. In Pittsburgh, the repeal passed with overwhelming support. 88.8% in favor, 11.2% opposed. 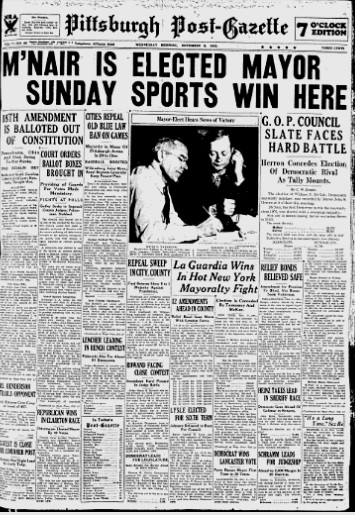 As the article notes, this was primarily done for the baseball team, the wildly popular Pittsburgh Pirates. No one really cared about how it’d impact the NFL, still struggling financially and looked down upon by most fans who preferred the “purity” of the college game. Still, the law let the Steelers/Pirates play on Sunday and they took advantage of the change for their final home game against the Brooklyn Dodgers. They didn’t put on a good show for fans, getting blown out 32-0.

Their last Wednesday game came weeks earlier on October 11th. One of their two wins of the season, a 17-3 victory over the Cincinnati Reds. We actually covered this game before in our 1933 season recap. I’ll link to the entire article but also paste the recap from the game, based on newspaper reports from the PPG and defunct Pittsburgh Press.

League rules stipulated that after three games, each roster could not carry more than 22 men. The Steelers were forced to cut four: Jim Letsinger, George Shaffer, Jim Tanguay, and Martin Kottler. So despite scoring the first touchdown in team history, Kottler got the ax. Tough break.

Head coach Jap Douds inserted himself into the starting lineup at tackle, becoming a player-coach. Obviously means he didn’t start the year playing like most probably assumed, myself included.

With the roster shifting, Brovelli was moved to quarterback (though realize in that offense, anyone in the backfield is a threat to throw). The Pirates purchase the contract of Ed Westerfall who faced the Pirates the week before playing for Boston. Not an uncommon tactic for a team to snag a few players from the team they were in town with. Not the last instance for the Pirates during 1933.

The day of, there is a feature on the “huge” tackle from Southern Methodist, John Burleson. His weight? 230 pounds. Again, times sure have changed.

The Reds struck first with their only points of the ballgame. Tesser’s punt was blocked after a poor snap on the Pirates’ first drive. Cincy settled for a 12 yard drop kick field goal.

The Pirates quickly respond with a touchdown in the first quarter. Tackle Don Rhodes blocked a punt from the Reds’ 22, then pounced on the ball at the two. Westerfall made an impression early in his Pirates’ career, scoring over left tackle the next play.

Not much else doing in the first half. The Pirates do threaten to score near the end of the half, putting together a 73 yard drive to the away team’s 12. On the drive, Broveilli had runs of 16 and 19 and Westerfall hit Moss on passes that netted 17 and 12. Westerfall also connected with back Elmer Schwartz for 11. But it’s foiled by a poor snap at the very end of the half and the ball somehow ends up near midfield.

Different quarter, same story in the third. Holm hits Tesser on a long pass of 33 yards to the Reds’ 20 but the team couldn’t come away with points. Interesting sidenote of how the game was policed for that time. Holm was called for “slugging” on the Reds’ two, a half the distance penalty. Meaning, it’s half the distance from the offensive’s own goal, 98 yards away. In the end, a 49 yard infraction that pushes the team back to midfield. Bizarre.

The Pirates finally punched through in the fourth. Kelsch booted a 23 yard field goal after the Pirates’ Whitey Engebresten recovered a fumble. Later in the 4th, tiny Harp Vaughn ran back a punt to the 12 and scored four plays later. With the PAT, we reach the final score of 17-3.

In the game, Tesser had a 73 yard punt that went from his own five to the Reds’ 23, though it was aided by a bobble from the return man. Jap Douds came in at quarterback in the fourth and promptly threw a pick.

One of the papers makes a mention the Reds had a player, “Tiny” Powell, who stood at 6’7, tall even by today’s standards.

5,000 people made the trip to Forbes Field to watch the home team win.

But despite that, the headline on the opening page of the sports’ section in The Pittsburgh Press did not talk about the Pirates. It read, “South Hills and Perry Fight For League Lead.” The Pirates’ game is not mentioned until Page Three. Pro football was not shunned but it certainly wasn’t the hot topic.

Only once since 1950 have teams played on Wednesday – the 2012 opener between the Dallas Cowboys and New York Giants. That game was shifted up a day because of President Obama’s DNC speech. Now, the Steelers/Ravens will join them.

What a wild year.

UPDATE (3:09 PM): Correction to my article. Pittsburgh’s last Wednesday game was actually three years later, October 14th, 1936 against the Philadelphia Eagles. It’s unclear why that game was held on a Wednesday Pittsburgh won that game 17-0 with the Press’ headline exclaiming “That One Was Easy!” Let’s hope tomorrow’s contest has a similar post-game vibe. 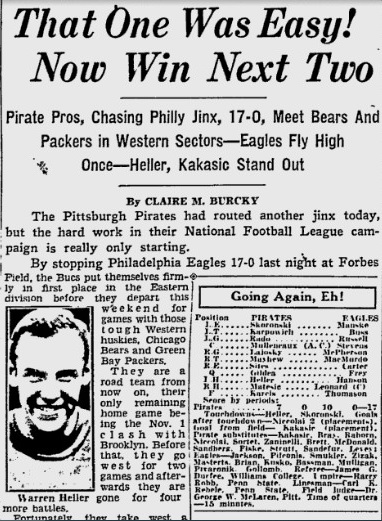 1933 or 1936, it’s a fun part of Steelers’ history to revisit. The repeal of those blue laws is what allowed pro football to arrive in the first place. You guys know the rest of the story.