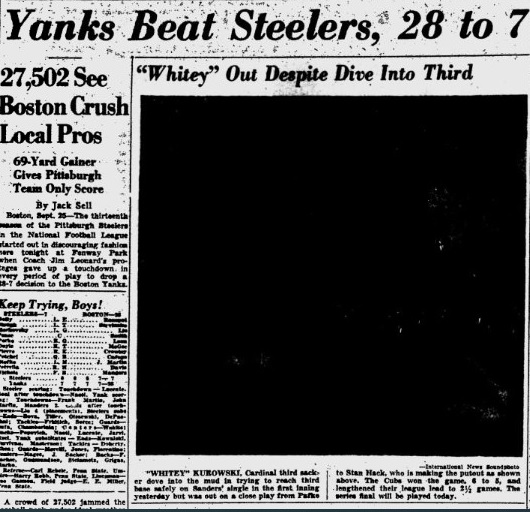 ♫♫♫ Are you ready for some foooootball

Tuesday doesn’t have the same ring to it, I know. But that’s the reality of the game this week between the Pittsburgh Steelers and Baltimore Ravens. Yesterday, the NFL announced they were moving the game – again – from Thursday to Sunday to Tuesday after an outbreak of cases in Baltimore’s locker room.

If you’re wondering if Tuesday games are rare, you’d predictably be right. It’s only the third such game since the 1970 merger. And for the Steelers, this will be only their second Tuesday game in team history. With a long weekend, let’s talk about the first.

It’s still World War II. The Steelers are back as a singular club for the first time in three years, merging with the Philadelphia Eagles (the Steagles, a surprisingly decent team) and then the Chicago Cardinals (the Card-Pitts, an unsurprisingly horrific team) in 1943 and 1944. But their opponent is feeling the roster pinch. They’re playing the Boston Yanks, in their second season and a group that would only exist until 1948. In ’45, they merged with the Brookyln Tigers in order for both clubs to field war-time rosters. They played their home games at Fenway Park – this article has some photos of what the field looked like.

The Steelers were led by first-year head coach Jim Leonard. A PA native, he attended Notre Dame before playing four years in the NFL with his hometown Eagles. He spent a season as an assistant coach for the Steelers in 1942 before returning to the more popular college game for a season at Holy Cross. Our David Orochena wrote about Leonard’s story this summer, an article worth your time for any history buffs out there.

Pittsburgh received the ball first to start the 1945 season but the miscues began immediately. They were called for illegal motion on their first play from scrimmage. A errant snap on fourth down gave the Yanks the ball deep into Steelers’ territory. Boston’s Johnny Martin scored from five yards out. It would be the last TD of his NFL career. Two Steelers’ drives later in the first quarter began with promise but ended without points. Early in the second quarter, the Yanks’ Frank Martin caught a 53 yard pass from George Cafego. With the extra point, Boston pushed their lead to 14-0. The score would remain that way heading into halftime.

Steelers’ QB Ed Stofko was intercepted early in the third quarter, setting up a third Boston score, a one yard dive by the hilariously named Pug Manders. The Steelers’ only bright spot came on what appears to be described as a hook and ladder play. Toimi Jarvi hit HB Tony Bova on a quick throw who then lateralled to John Lucente, racing the rest of the distance into the end zone. Officially, it went down as a 60 yard completion. For some reason, Pro Football Reference doesn’t recognize Jarvi as throwing a TD pass that season. In fact, according to their records, the Steelers didn’t throw a TD pass the entire season. They were pretty good at throwing to the other team though, tossing 21 picks.

Manders scored his second touchdown from two yards out in the final minutes to ice the game and give Boston a 28-7 win over Pittsburgh. In the Post-Gazette’s column the next day, the PPG offered the encouraging note of “Keep Trying, Boys!” above the box score. 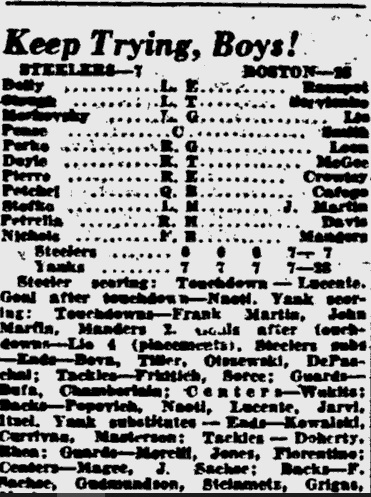 The Steelers may have tried the rest of the season but their results rarely improved. They finished 1945 2-8, last in the division, and scored more than ten points just twice all season. And you thought last year’s offense stunk…