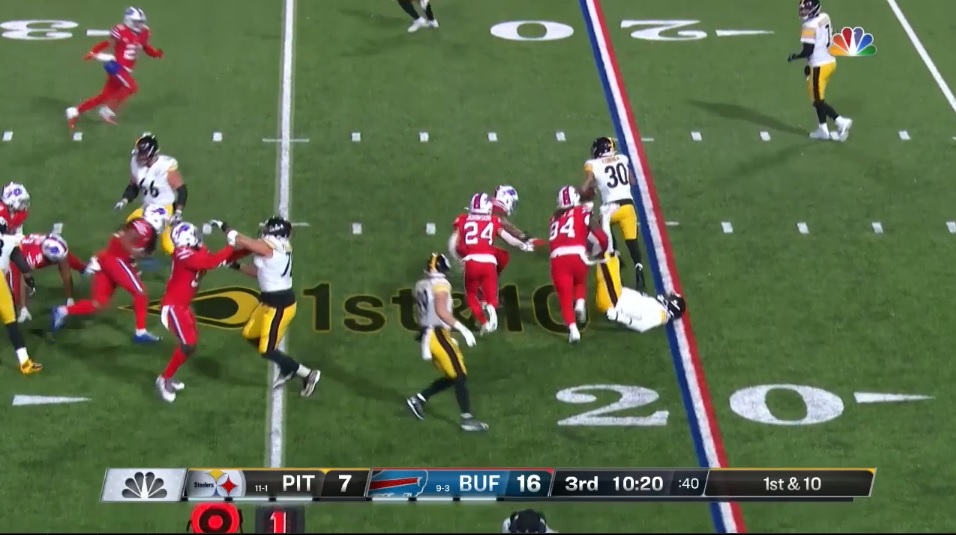 There’s plenty of reasons why the Pittsburgh Steelers dropped their second straight game to the Buffalo Bills Sunday night. They were bad on possession downs, putting up a horrific 1-10 line on third down. They didn’t take care of the football, turning it over twice including a back-breaking pick six at the end of the half. And the defense didn’t play nearly as well in the second half, blitzing without much success against Josh Allen.

Above all though, Mike Tomlin says the Steelers just weren’t physical enough. And that’s a big reason why there’s a “2” in their loss column.

As many teams have done over the last two months, the Bills shut down the Steelers’ run game. Pittsburgh carried the ball 17 times for 47 yards, an average of less than three yards per carry. It’s the fifth game this season the Steelers have run for under 50 yards, a first in franchise history.

Tomlin said the battle in the trenches wasn’t the only area where the Bills were the more aggressive, physical team.

“Definitively, I thought that they were the more physical group. And not only in the box and in box play, but in some of the perimeter play. I thought Diggs at the wide receiver position played a real physical game and made physical type plays. I thought their coverage people played aggressive and physical. In the return game and in the kicking game, I thought their veteran return guy was vertical and they won the battle a field position because of that definitive elemental of play.”

Diggs carved up the Steelers to the tune of ten catches for 130 yards and one touchdown. On a third down before the half, Diggs caught a slant, bounced off Minkah Fitzpatrick’s shoulder tackle and raced 23 yards downfield, setting up a Bills’ field goal.

Wrap it up, yo. #Steelers pic.twitter.com/gtrrc4Io9M

On the other side of the ball, CB Tre’Davious White proved to be a wake-up call for guys like Chase Claypool. White planted Claypool with a hard jam on the first third down of the game, sending Claypool to the ground.

What kind of third down primary route is this???? #Steelers pic.twitter.com/2DYoV5UIRb

And as Tomlin mentioned, Bills’ returner Andre Roberts consistently set their offense up in good field position. He had kick returns of 27, 31, and 35 yards. Those are just a few examples of an overall theme of Buffalo being the stronger team.

Though late in the season, Tomlin said the team could be in pads again during this week of practice. They were also in pads before the Bills’ game for at least one day, clearly not having the impact Tomlin hoped for.

“Certainly there’s an opportunity for [to be in pads], particularly because we have a legitimate week prep this weight. So we’re excited potentially about that.”