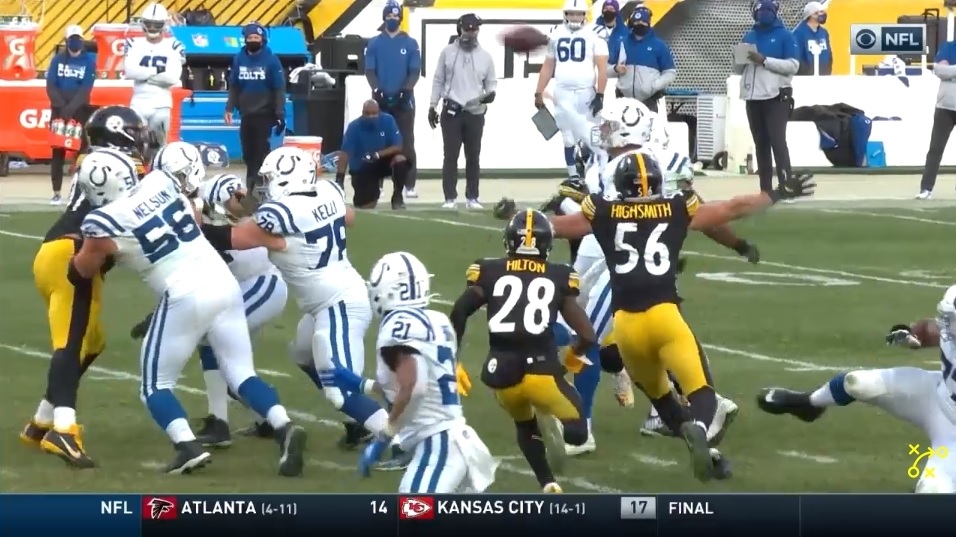 Alex Highsmith has proven one thing. He’s going to be the Pittsburgh Steelers’ starting ROLB next season. If Pittsburgh’s front office had their choice, Bud Dupree would return. But he’s going to be too expensive to re-sign. Either his market value will remain strong despite his knee injury, pricing him out of the Steelers’ range or his market will be significantly impacted and he’ll be forced to take a short-term deal. The inability to spread money out on a one or two year contract will also prevent Pittsburgh from re-signing him.

So we’re moving on. And Highsmith is the guy. That’s why the Steelers made sure to draft an EDGE rusher early, taking Highsmith with their second selection of the 2020 draft, and why he’s been under the microscope since taking over for Dupree.

Highsmith didn’t play a fantastic, start-to-finish kind of game Sunday against the Colts. If anything, his first half was pretty poor. He struggled to find the ball in the run game, got stuck on blocks, and his pass rush impact was minimal. But when the Colts were forced to turn to third-string left tackle J’Marcus Webb, an NFL journeymen, Highsmith turned up the heat. He had two critical pressures in the final seven minutes of Sunday’s massive win. Let’s talk about them.

“The cross-chop or chop-club in its simplest form is when a rusher chops across his body and traps or ‘pins’ a blocker’s outside or inside arm. The modern version made famous by Umenyiora has an added element of an inside-out fake that precedes the actual chop, meant to sell an inside move or power, causing the blocker to stop their feet and anchor. This is usually followed up with a club move or club-swim combination to secure the edge of the blocker so the rusher can complete the turn.”

For Highsmith on Sunday, the move is chopping his inside arm to trap/pin the outside arm of the Colts’ LT. That shortens the corner for Highsmith to flatten and get upfield on his way to the QB. You can tell the cross chop by the “hop” the pass rusher takes as he executes faking the inside/power rush with the inside leg.

He’s able to win the corner, get upfield, and force Rivers to throw under pressure. His pass is overthrown and picked off by Mike Hilton, preserving the Steelers’ 28-24 lead. Highsmith did a good job to keep his steps and track after stumbling a bit on the snap, timing it a split second early.

Of course, production on Sunday’s comes from work put in over the year. This isn’t something new Highsmith added to his toolbelt mid-season. Or a brand new innovation created by Steelers’ coaches to break their losing streak. These are moves that get repped every day in practice.

Here’s Highsmith and the Steelers working on the cross chop during this individual circuit in training camp. Note these drills are led by DL coach Karl Dunbar, who functions as the team’s EDGE rush coach and should be credited for the success of guys like Watt, Dupree, and Highsmith.

Same move you saw way back in August show up in Week 16 to help clinch the division. Hard work paying off.

Later in the game. Colts facing 4th and 8, driving into Steelers’ territory, so much on the line. Highsmith had been winning on the outside against Webb. So he beautifully counters with an inside spin. Webb punches but falls off and goes flying to the ground. Highsmith keeps his balance and pressures Rivers, forcing his throw to an open Zach Pascal off the mark just enough to create the incompletion. And giving the Steelers a much needed victory.

This was an especially smart rush knowing RB Nyheim Hines was releasing and chipping to the outside. Colts’ backs and tight ends were bumping the Steelers’ OLBs all games. Highsmith avoided getting caught up in that by countering inside.

Highsmith has been working on that inside spin for several weeks now. It hadn’t had much success so far. Here he is being stopped using it two weeks ago against Buffalo. Loses rush lane integrity and Josh Allen throws a TD.

Rush lane integrity wasn't great Sunday night, especially in the second half. Way too clean of a pocket for Josh Allen. Alualu/Tuitt run into each other on the stunt (more DT stunts with Dupree out), Highsmith spin fails and he's sealed inside. TD to Davis. #Steelers pic.twitter.com/6fFDmYtXOe

But Highsmith got it work here and that’s all that matters.

Of course, he was facing lower quality competition. The Colts were on their third string LT with Webb, who was never a very good tackle even at his peak and was only signed by the Colts two weeks ago. This isn’t Joe Thomas he’s whopping on. But Highsmith is a smart, advanced pass rusher who has a lot of ways to win. For him, it’ll be about finding one or to key moves to be great with. Maybe that’ll be the two rushes he showed in those clips. Cross-chop to win outside, countering with an inside spin when tackles cheat and overset.

Regardless of context, Highsmith came up big Sunday. And he’ll be your starter opposite TJ Watt come Week One next year. I’m feeling increasingly confident about the idea.