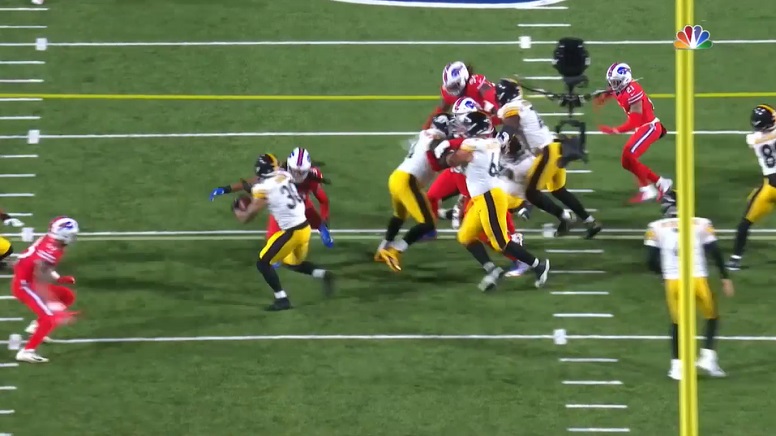 There is no gentle way to put this: the Pittsburgh Steelers’ rushing game is terrible, especially since week seven of this season.

But, what about location specific numbers? Or, in other words: are the Steelers having more success running to the left, middle, or right side of the field?

To find the answer to that, some quick data science work does the trick. For the first time on Steelers Depot, I will share a picture of the code used to pull this information as it seems people enjoy seeing “under the hood” of my work when I post stuff on Twitter (@BradCongelio).

After a few additional lines within the gt tables package, this is the result:

Running up the middle simply is not working for the Steelers. The EPA is negative, and the average yards gained in doing so is below the totality of the season average of 3.9 yards per carry. If anything, the Steelers should put a stronger focus on getting the running backs into the edges where the numbers are slightly more promising.

That said: the above table includes all the data from the 2020 season. Things get ugly if we filter out the data to include just the rushing attempts from the post week-seven collapse of the running game:

Since week seven, the Steelers have lost nearly an entire yard in average yards gained on the ground and the EPA has gone negative across the board.

To be blunt: it is hard to have hope that the Steelers can do much of anything in the playoffs if the EPA for rushing continues to be negative. For the sake of comparison, the Cleveland Browns have EPAs of 0.250, 2.29, and 0.04. A simple correlation study would reveal that the teams considered to have increased chances of a deep playoff run have net positive rushing EPAs.

That should not be a surprise.

Mike Tomlin has said the running game can be corrected. Let us hope he is correct.