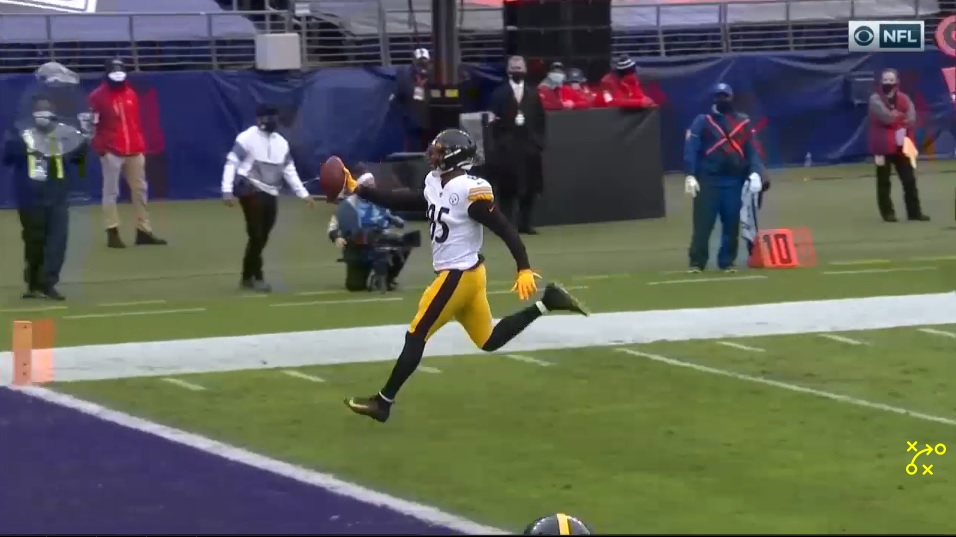 1. The Hammer – American crime novelist Mickey Spillane often wrote about a character named Mike Hammer who was a no hold barred, hardnosed detective. Since being thrust into the starting lineup Robert Spillane has played with a similar modus operandi. He’s been a physical, high motor, in your face defender every game. He came in right away and notched six tackles in his first game and stopped a train at the goal line versus Tennessee. This week he was all over the field including double digit tackles, a tackle for a loss, two pass breakups including a big one on third down and a pick six and he added a fumble recovery on fourth down for good measure. Great job being the next man up by Spillane and kudos to inside linebackers coach Jerry Olsavsky getting him ready.

2. Dancing on the Edge – Lamar Jackson is a unique athlete and makes amazing plays almost on a weekly basis. We see highlights all the time of him heading to the sideline and cutting back inside for extra yards.  He tried it against the Steelers and got wrapped up by Minkah Fitzpatrick and then got popped by Cam Heyward while he was still in the field of play. If Jackson makes the choice to stay in play he takes the chance of getting hit. The referees calling Heyward’s hit unnecessary roughness is wrong.

3. From A to B – The Steelers lost Tyson Alualu to injury early in the game and the impact was evident throughout the game. Giving up 265 yards rushing in a game is at least in part to losing Alualu. Isaiah Buggs was the man asked to fill those shoes and while he was not lacking in effort there was a step down in technique leaving some holes in the middle. But there is a reason why they play the whole game.  Buggs came up big later in the game with 2 big pressures and making the first hit on the fourth down run by Jackson late in the game by shedding his man. He did well in his first extended play opportunity.

4. Ugly Early – That first half was bad. There was no flow to the offense, no sustained drives and no life to it at all.  Passing options seems to be limited to shallow crossing patterns and taking too many deep shots.  Hard to tell what the reasoning was for the stagnant play but there were yards out there that Ben Roethlisberger seemed to miss.  Two plays in particular it looked like he had James Conner open to left with no one near him.  The results of those plays were an incomplete pass to Jaylen Samuels and another knocked down by the defensive line. I’m looking forward to seeing this offense really click consistently at some point this year.

5. Necessary Toughness – He’s had big seasons. He’s had multiple 90+ yard receptions. He’s made big plays. And this year Juju Smith-Schuster is making the tough plays. He hasn’t put up consistent big numbers but he has made many important catches and they never seem to be easy.  He’s had to be the physical receiver in the middle of the field and he’s had to work to earn the tough yards after the catch. At least once a game you seem him get up slow after a play were it looks like he is sore from the hits he taking.  But he doesn’t complain ever. Total team player that you would hate to see go next year.

6. Sometimes Stats Don’t Tell the Story – Let’s turn back the clock to noon on Sunday. And let’s say I propose to you that Baltimore will put up over 450 yards of offense including 265 yards on the ground. And then I tell you Pittsburgh would have 173 yards passing and 48 yards rushing. Raise your hand if you think that would mean a win? This team has been resilient so far.  They are winning games they would have lost in the past.  The games are still nerve racking, that doesn’t change but this team is finding ways to win.

7. Party of 01 – Another reason the team is playing well is they have been able to make adjustments when things aren’t working out. Part of the spark in the second half was the offense running a lot of 01 personnel (one tight end and four wide receivers). I think this accomplished two things. First it spread out the defense. The Ravens have three very good corners. That leaves two other receivers that should be able to win their match up. Secondly, it opened up the middle of the field a place where the Steelers need to take advantage of more. It made a huge difference in the second half of the game.

8. Smarts or Speed? – On the final drive the Steelers were using essentially 7 defensive backs on the field using LB/S Marcus Allen in the middle of the field. This meant that Vince Williams and Spillane were on the sideline. My thought is they wanted more speed on the field and I understand that thought process.  Personally, I would have rather had Williams who while isn’t as fast has a good understanding of situational football, takes good angles and is a strong tacker or Spillane who was having an outstanding game on the field in that situation over a guy who has ZERO defensive snaps coming into the game.

9. More McCloud – There has been a light sprinkle here and there and I suspect there may be a more steady rain coming. Ray-Ray McCloud has done a fantastic job on special teams to this point as the returner and his appearance on the offense is popping up more and more. It started with some sweeps and more reps as a receiver. He had 3 offensive snaps in the first three games. He’s had 39 in the next three games before the Ravens game.  And if you haven’t noticed he’s a pretty good blocker as well. I am ready for more of him on the offense going forward.

10. Stephon Stepping Up – His presence has been felt all season on the defense and he again was super productive on Sunday. Nine total tackles, three tackles for a loss, three quarterback hits and two sacks. The two sacks give him six on the year which is just a half a sack shy of his career high and there are still nine games left. Health has been an issue in his career and now with a health issue to Heyward and Alualu his role may be more important than ever. He’s been on the verge of a big season the past couple years and this has the makings of a monster.