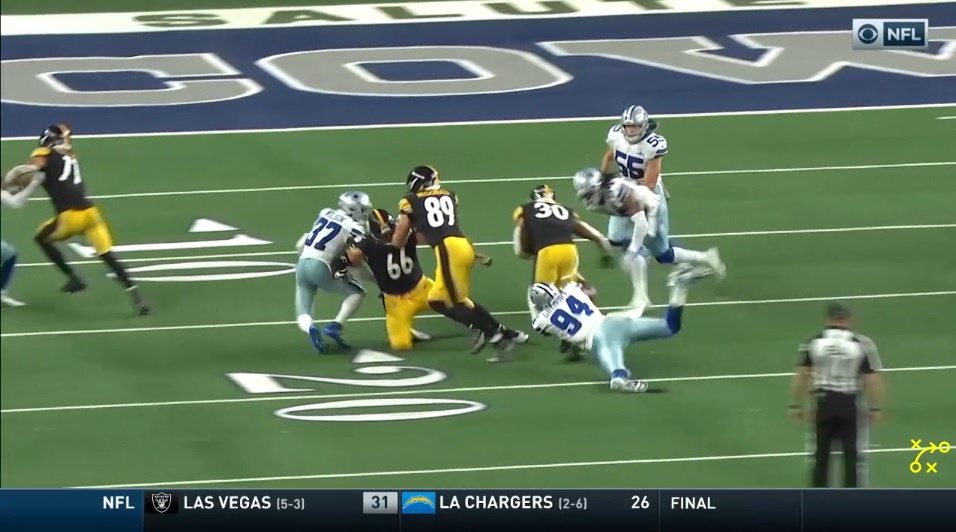 Hear it from offensive coordinator Randy Fichtner and step one in fixing the Pittsburgh Steelers’ run game is not to go backwards. He means that literally. In discussing the team’s struggling running game, Fichtner said avoiding TFLs are step one to getting things in a better place.

“We always talk about being able to run it when we want to run it and being efficient at that,” Fichtner told the media Thursday via a team transcript. “It keeps the chains moving. I think some of the things that have happened is we’ve had some lost yardage plays. Those are the negatives that put you back. You run the ball on first-and-10 and you miss three. The point of attack, block and/or blocks maybe weren’t executed well enough. It puts you behind the chains.”

For the entire season, Pittsburgh hasn’t done well in avoiding negative plays. Excluding kneeldowns, they have 22 carries that’s resulted in a loss of yardage, ranking in the bottom half of the NFL. Things have gotten only worse over their last month of action. A whopping 12 of those runs have come over their last four games, tied for 29th in the league. Only the 49ers and Rams have been more inefficient.

The Steelers have gone three straight games held under 50 yards of rushing for the first time in history. Luckily, Ben Roethlisberger and the pass game have shouldered the load but the team is on an unsustainable path. Even a strong passing game has an uphill battle when faced with 2nd and 12 or 3rd and 9.

“I just think if we can eliminate some of that negativity then we would probably look at our running game every week and say, “Wow. We were a little better.”

On paper, Jacksonville doesn’t boast an intimidating rushing attack, ranking average to below in most categories. But Pittsburgh has similarly appetizing matchups against the Cowboys and Bengals and did nothing against them. Until the run game is fixed, or at least improved, the offense will rely on the one-step and three-step pass game as their run substitute.

“We look at all of those type of screens, those little quick passes that we throw to JuJu [Smith-Schuster] and Diontae [Johnson] and two-yard balls that maybe go for 7. We’re not asking them to be touchdowns. We’re putting them in good guys hands that might be able to make explosive plays, but you’re looking to keep that efficiency and consistency four (yards)-plus a play and always going to put yourself in a minimal third down situation.”