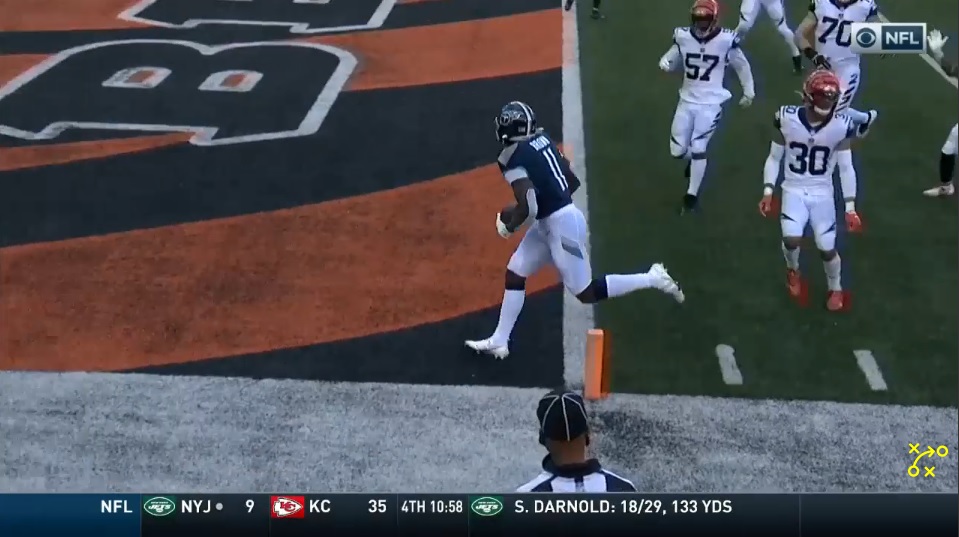 Tennessee has two receivers in tight splits to each side with running back Jeremy McNichols (28) offset to the left. To the right the Titans have A.J. Brown (11) on the inside and Adam Humphries (10) on the outside.  To the left they have tight end Anthony Firkser (86) inside and Corey Davis (84) outside.

In this third and medium distance scenario the Bengals counter with their dime personnel. To the left side of the defense they have LeShaun Sims (38) outside and Mackensie Alexander (21) inside. On the right, William Jackson III (22) is outside with Brandon Wilson (40) over the tight end. In the middle of the field they have safeties Vonn Bell (24) and Jessie Bates III (30) split.

Before the snap the Titans motion their tight end to the left to see if the Bengals will show their coverage and when Wilson runs with him this usually indicates Man coverage. The middle of the field is empty with linebacker Logan Wilson (55) lined up on the right edge ready to rush the passer.

At the snap Bell moves to the middle of the field in the “robber” role and Bates moves to the deep middle. Underneath the safeties it’s Man coverage across the board. To the right Humphries runs a comeback route with Sims in tight coverage. The two inside receivers, Firkser and Brown are going to run crossing routes to create a natural rub to free up Brown by blocking Alexander’s route behind Brown.

Here quarterback Ryan Tannehill can hit Brown underneath and he’ll have an easy path to the first down.  However, Davis runs a nice route on an out and up by flattening to the sideline and turning his head to the QB. This gets Jackson to bite just enough to open up space behind him when Davis turns up field.  Bates is too far away to help so Tannehill drops a pretty pass over the DB down the sideline for a 27 yard gain.

Steelers Scenario – The Steeler like the out and up route so it’s already part of the offense. In this scenario, JuJu Smith-Schuster runs the comeback route. Inside you’d have Eric Ebron and Diontae Johnson running the crossing routes and this is the safer route to hit for the first down.  The out and up is for the Y receiver so that is James Washington or Chase Claypool both having good deep ball skills.

The Titans have one receiver in a tight split to the right and two receivers in tight splits to the left.  There is a tight end on the left wing and running back set deep behind the QB who is under center. The Bengals are in their nickel personnel with four linemen, 2 linebackers and 5 defensive backs.

Prior to the snap Bell is going to walk up into the box leaving one safety deep.  At the snap Tannehill will open to his right and move to meet running back Derrick Henry (22) in the backfield. The offensive line and tight end Jonnu Smith (81) will slant to the right making it look like a Zone run to the right. Tannehill will show the ball to Henry and then tuck and move into a half roll out to the left.

The play action fake gets the defensive lineman, linebackers and Bell to all move to their left. Linebacker Josh Bynes (56) would have Smith in coverage but he is one of those deceived by the fake. Tannehill hits Smith with a 5 yard pass and he turns it into a 19 yard gain with the help of a good block by Brown.

Steelers Scenario – Ebron has been a good addition for the Steelers this season and he will benefit on this play.  Washington or Claypool run the deep route with Johnson running the whip route. This puts two receivers in the short area for Ben Roethlisberger from which to choose.

Tennessee has a wide receiver wide to each side and a tight end in the slot to each side with a running back offset to the right of the QB. The Bengals, up 17 in the fourth quarter are in a two deep safety coverage with Zone coverage underneath.

The Titans are going to run mirrored routes with both outside receivers running Go routes and both tight ends running Post routes. The TE’s will press their routes to the outside to try and widen the underneath coverage before breaking to the inside. The running back McNichols will check release from the backfield into a curl route in the middle of the field.

On the defensive side the safeties get depth protecting against any big passes while the linebackers, Wilson and Akeem Davis-Gaither (59), along with Alexander drop into Zone coverage in the middle of the field. QB Tannehill is reading Alexander from the snap. He’s the closest to the line of scrimmage and doesn’t get enough depth and Tannehill will fire it over the top hitting Firkser 15 yards down the field and he adds another 11 yards.

Steelers Scenario – Normally 12 personnel would include Vance McDonald but he may be out this week. In this personnel grouping the WR’s have usually been Smith-Schuster and Johnson so they are on the outside.  The tight ends would be Ebron and Zach Gentry if McDonald can’t play.  The Steelers have not been shy about getting everyone involved so hitting Gentry on this play wouldn’t be that big of a surprise especially if Alexander (5’10) is the guy in front of the 6’8” Gentry.