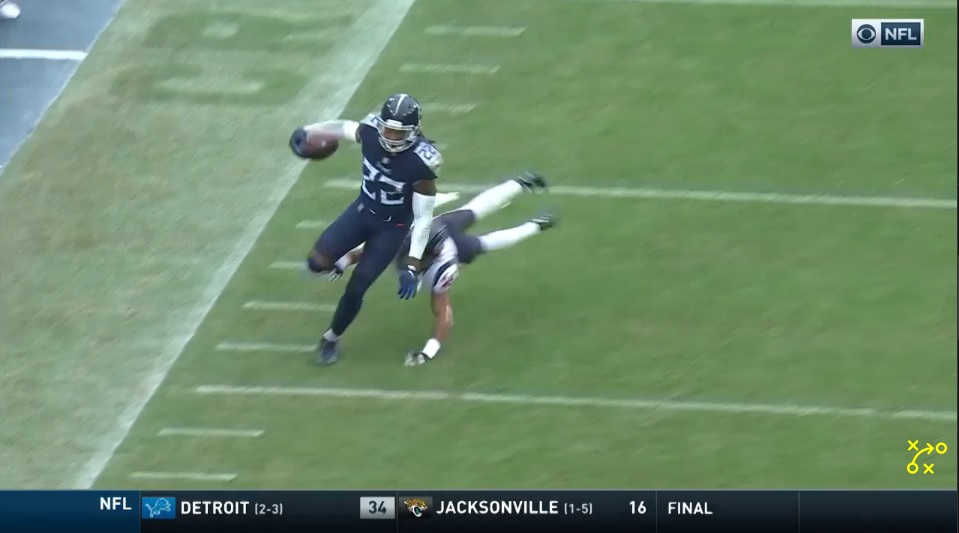 Here’s our analysis of the Tennessee Titans’ offense.

Another five star matchup with this Tennessee rushing attack. You already know the #1 name this group will have to contain. Derrick Henry. He’s coming off a 22 carry, 214 yard, two touchdown performance in last week’s OT win over the Houston Texans. For the season, he’s averaging 4.8 YPC (worth noting prior to last week, he was averaging just 3.7 YPC) with six rushing touchdowns.

He’s also one of the few workhorse backs left in football. He’s played over two-third of the team’s offensive snaps and carried the ball on 75.5% of their total team carries, 123 of 165. Top backup is Jeremy McNichols, who has only 16 carries. Just as impressive has been Henry’s ball security. Zero fumbles this season.

They do have a FB, #41 Khari Blasingame. He’s played 51 snaps, or 14% of the team’s total. They’ve also used rookie center Aaron Brewster, low to the ground at a listed 6’1, as a fullback in goal line situations. 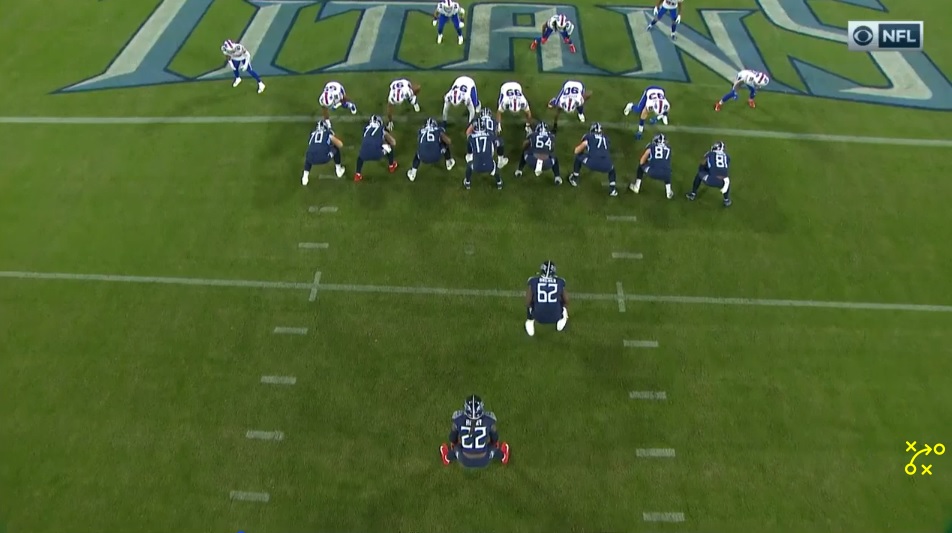 The run scheme is fairly diverse. For a team with a physical back, they do run plenty of zone. Some of the outside zone stuff comes with speedier backs in McNichols or rookie Darrynton Evans but Henry is freak enough to be used in any scheme.

They run plenty of inside zone and split zone. Their o-line wasn’t as impressive as I expected before watching the tape but the frontside does a good job of creating movement and washing defenders down. Back runs off their hip to daylight.

Some other offensive stats worth noting. They are the 2nd best scoring offense in football, averaging just under 33 points per game. They’ve put up 30+ in four straight and 40+ in their last two; not many teams can say that. That’s thanks to a strong third down offense (48.3% – 6th best) and red zone offense (78.3% – 3rd best). They also don’t give the football away. Just three turnovers in five games, though all three have come in the last two contests. Tennessee is tied for the league’s best turnover differential at +6. Combine those factors and you have a pretty good group to deal with.

Ryan Tannehill is picking up where he left off a year ago, continuing to play good football. He’s completing 70% of his passes with 13 TDs and just a pair of interceptions. Been pushing the football downfield too. Team averaging 7.9 YPA, ranked in the top ten in the league. The line’s kept him upright too. Sacked just five times this season, though they’ll be tested with LT Taylor Lewan out for the season after tearing his ACL last week.

Like Pittsburgh, they have a wide array of weapons. WR AJ Brown is their top target and biggest threat in the passing game. He’s missed time with a bruised but is averaging over five catches per game in a fairly run-heavy offense. There’s also a couple of impressive TEs in Jonnu Smith and Anthony Firkser. Smith leads the team in receiving yards (234) and touchdowns (5) but is dealing with an ankle injury that’s leaving his status uncertain for this weekend. Firkser admirably replaced him with an awesome 8/113/1 line last week. And he only played 41 offensive snaps. Adam Humphries is a reliable slot option leading the team in catches while receiver/returner Kalif Raymond is averaging over 20 yards a catch. Don’t forget about former first round pick Corey Davis either, having one of his better seasons.

Like Cleveland, this is an offense that’s at its best when they’re using playaction. Don’t boot to the left as often as the Browns did but they like to open up drives with playaction. Can either boot Tannehill to the field, often looking for an over route from #1 or hitting the Y in the flats (as shown below) or a traditional dropback.

They love to run Brown as the #1 on dig routes. 15-20 yard in-breaking routes against off coverage. He’s a tough guy to compete with at the catch point. He also tied the Texans game last week on a no-huddle jump ball in the corner of the end zone. He’ll most often see Steven Nelson and that’s going to be a big challenge for this team.

Popular concept they run is Smash. Can mirror it to either side. Smash is a high-low read designed to stress the cornerback and beat two high coverages. One receiver runs to the flat/curl route. The other runs to a corner/flag route. CB bites on the flat route, throw the corner. CB sinks on the corner, hit the flat.

Heading into Sunday’s tilt, the Steelers and Titans are two of the three teams in the NFL that remain undefeated.

Fortunately for the Steelers, there’s not a ton of different in schematic preparation in terms of this week compared to last week with the Browns. Tennessee features a run-heavy attack that relies heavily on play-action passes and a mobile quarterback.

This Titans’ team took on a whole new look when former Dolphins quarterback Ryan Tannehill took over as the starting quarterback midway through the 2019 season. Since then, Tennessee has become one of the best offenses in football. The Titans have scored 42 points in back to back weeks, largely on the back of a punishing rushing attack with Derrick Henry.

With Henry as the battering ram, the Titans are able to have a ton of success on play-action, which – in turn – has helped create larger rushing lanes for Henry to work with.

Plenty of people see Henry as a straight-ahead battering ram. That simply isn’t the case. He’s a smart, instinctive running back who sees lanes before they develop and has a knack for setting defenders up, creating space for him to run free.

Watch the way Henry sets up Houston linebacker Zach Cunningham here, giving him a free lane into the secondary, which allows the 6-foot-3 running back to run away from the Houston defenders. Once he’s up to full speed in space he’s hard to catch.

The Titans help Henry get up to speed in space with quick tosses left and right, allowing him to get to the perimeter against smaller defenders.

Look at the way Henry sets up the Vikings’ defensive back here, jumping back inside to rip off the 16-yard run.

Due to Henry’s overall success on the ground, play-action is a deadly weapon for Tennessee’s offense, especially with Tannehill slinging the football around the yard.

Tannehill has always had a strong arm with very good accuracy. Now, he’s finally behind a strong offensive line and has a ton of weapons around him. Add in the fact that offensive coordinator Arthur Smith is calling the shots…man, its fun to watch.

Check out this sail concept here against Minnesota, opening up an easy throw from Tannehill down the field.

Watch the Minnesota linebackers bite downhill on the run fake to Henry, which then opens up a massive throwing window for Tannehill to slot receiver Adam Humphries.

Tannehill has been really good on play-action and RPOs all season long, firing strikes to tight ends Jonnu Smith and Anthony Firkser, as well as receivers AJ Brown, Corey Davis and Kalif Raymond.

Tennessee won’t always throw with play-action though. When they throw regularly, Tannehill is very efficient. He throws a strong, accurate football.

This is an absolute dime from Tannehill into a tight window to Brown over Bills cornerback Josh Norman.

The following week against Houston Tannehill threw another dime to Brown on a fade to tie the game. He thrives with ball placement, giving his guys a chance to win one-on-one.

With Jonnu Smith taking a star turn at tight end this year, a lot of attention will be paid to him. One guy I can’t take my eyes off though is backup tight end Anthony Firkser.

He knows how to find soft spots in the zone and show his numbers to Tannehill. When the ball is thrown his way, he catches it at a high rate.

I like the way he can find space in the red zone.

Firkser does a great job here taking contact on the route, regaining his balance and slipping into space to make the tough catch between three Houston defenders.

There aren’t a ton of big names on the offense for Tennessee, but this is a well-built offense with all parts rolling.

The offensive line epitomizes this offense to a T.

Here’s how I expect this blue-collar line to line up on Sunday, left to right:

With Taylor Lewan done for the year with a torn ACL, Ty Sambrailo will have to carry the load – at least this week. Sambrailo has had a tough time in limited action and will have to go up against Bud Dupree this week. Good luck.

I really like the interior of this offensive line. They’re downhill thumpers that fit well in front of Henry, Jeremy McNichols and rookie Darrynton Evans.

On special teams, Stephen Gostkowski has struggled at times this season, but he’s had a strong stretch since the beginning of the season. In the first two weeks of the year the veteran missed five total kicks (field goals and extra points). Since then, Gostkowski has drilled 11 of 11 kicks, winning a handful of games in the process for the Titans. He still has a strong leg and is very accurate 45 yards and in.

At punter, Brett Kern is one of the best in the game, averaging 46.5 yards per punt. He has a big, strong leg and is able to kick directionally with precision. He can really flip the field and pin teams deep.

Raymond is a very strong return man for Tennessee, one who has ripped off a couple of explosive returns so far in 2020.