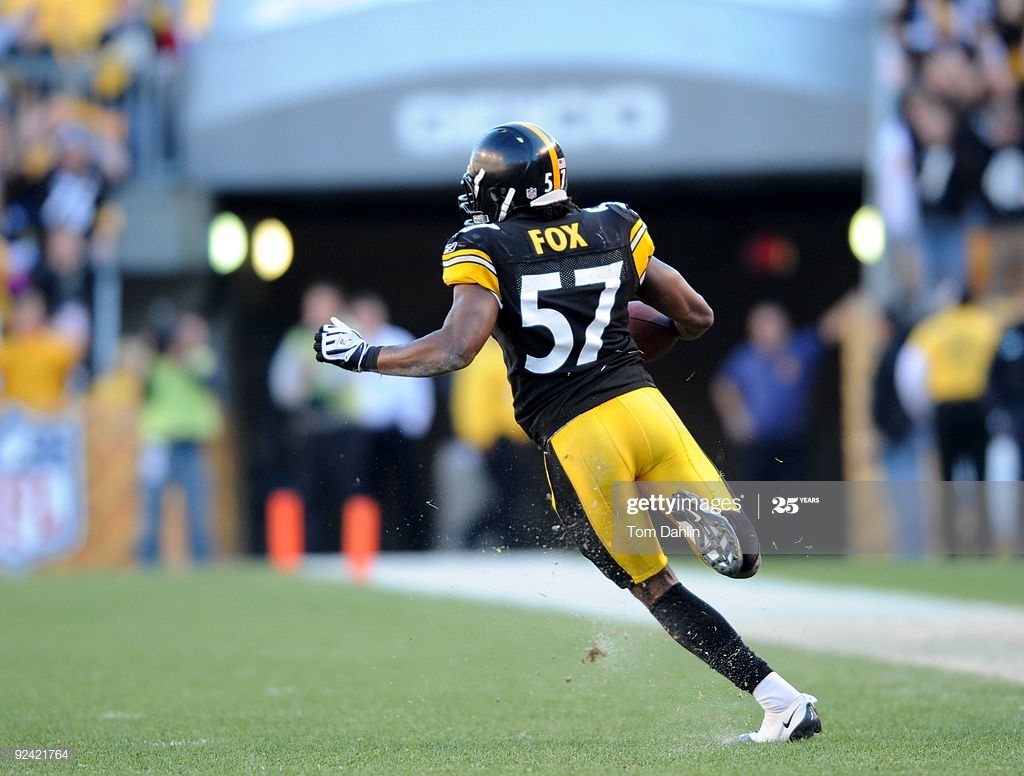 Every Super Bowl winning team needs to be strong on offense, defense, and special teams. Fox provided help on that third group and in brief moments, even helped out on defense.

Following a strong career at Georgia Tech, Fox was selected in the 3rd round of the 2004 draft by the Kansas City Chiefs. He made just four starts in as many years there before signing with the Steelers in March of 2008, inking a one-year deal with the team.

He spent 2008 as a backup but finishing with 17 tackles and two fumble recoveries as the Steelers went on to beat the Cardinals in the Super Bowl. Not a bad first year with your new team. That play earned him a two-year contract to return with Pittsburgh in the offseason.

It also led to his only three starts with the black and gold. Replacing an injured Lawrence Timmons, out with an ankle injury, Fox got the nod in Weeks 1 and 2 and again in Week 9. The biggest play of his career though came in Week 7, pick sixing Hall of Famer Brett Favre, an 82 yard score the other way. Really though, the blame falls on RB Chester Taylor, who saw this screen pass go in and out of his hands.

He is one of three Steelers since the merger to have one career INT and returned it for a TD. Darin Jordan in 1988, Rian Wallace in 2006 (another great Steeler to remember) and Fox in ’09.

Fox would play out his contract in 2010, not recording a start but racking up 23 tackles and a forced fumble. He followed assistant coach Lou Spanos to Washington for 2011, again serving as a special teamer with 14 tackles, before inking a deal with the Texans the following season. A knee injury early in camp ended his season and his career, never signing with anyone after that.

I haven’t been able to find much info on Fox post-football. Sports Illustrated named him to Georgia Tech’s Quarter-Century Team, writing:

“Keyaron Fox’s explosiveness and big-play ability gave him the versatility to play OLB or line up at DE in nickel situations…Fox was a First-Team All-ACC honoree and the runner-up for the league’s Defensive Player of the Year award. He was selected Second-Team All-America by SI.com (Sports Illustrated).”

Keyaron Fox, your blast from the past.