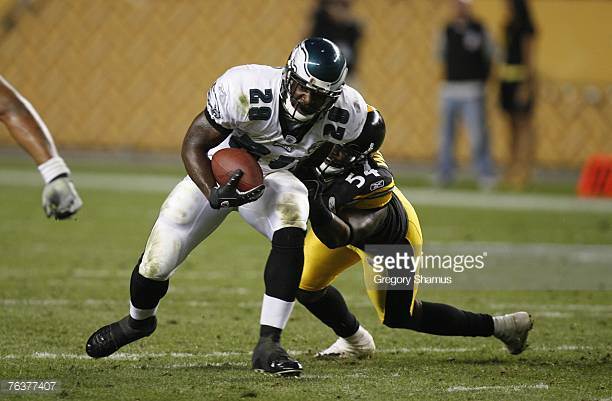 So far, this entire series has focused on the offense. It’s a little bit easier to find those guys than say, the dude with one tackle, and a little bit flashier too. Or at least slightly more compelling. But the defenders deserve some love too. Linebacker Rian Wallace is unique in that he’s one of very few players in team history to record only one interception and return that one back for six.

Like the majority of the plays we’ve mentioned, this one came in a blowout, though for once, not against the Cleveland Browns. Instead, it was Kansas City playing victim for the day. Pittsburgh dominated early and often, sitting on a 31-zip lead by halftime that compelled Bill Cowher to quickly pull his starters. Those starters were banged up to begin with, no James Harrison or Joey Porter, leaving the team to start Arnold Harrison on the edge and Wallace a top reserve.

The Chiefs relented too, at least, at quarterback, pulling the previous red-hot Damon Huard in the middle of the 4th quarter. Brodie Croyle checked in and immediately fell on his face. Here’s what happened his first four dropbacks.

That was Wallace, of course, getting his hands on the football. He undercut a crossing route by TE Kris Wilson, Croyle throwing the ball too late and Wilson basically stopping, and had open grass ahead of him, returning it 30 yards and into the end zone. The cherry on top in a 45-7 win.

2006 would be his last season appearing in the NFL. After moving on from Pittsburgh after that year, he briefly spent time in camp with Washington but a broken hand and dislocated shoulder got him waived. He had a brief stint with the UFL before ending his pro playing days.