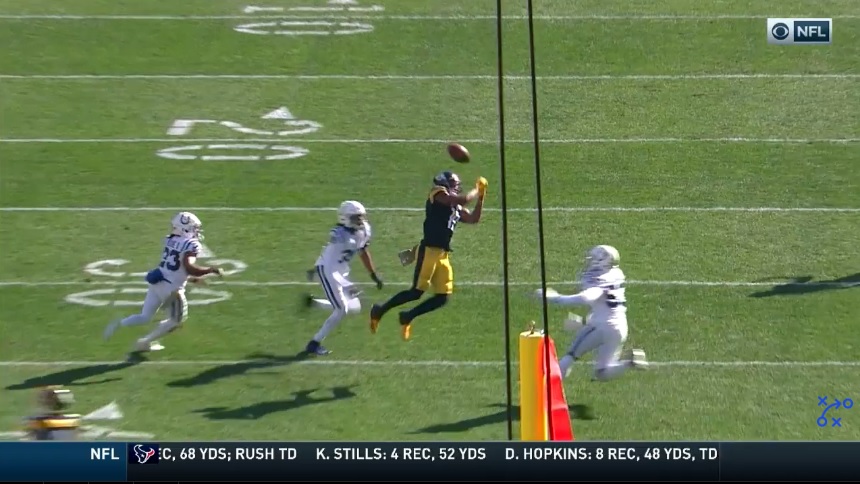 Drive Overview: An ugly, short drive that ended with predictably disastrous results. On first down, the Steelers ran a dart scheme with backside tackle Alejandro Villanueva pulling around. Matt Feiler lost his block while Maurkice Pouncey struggled with NT Christian Wilkins, leading to a one yard gain.

David DeCastro was called for a false start on 2nd down. Penalties becoming a recent theme of this series, making it 2nd and 14. Mason Rudolph dropped back to throw. His first read was to James Washington on a vertical route down the left sideline but it was bracketed away. He came across the field for JuJu Smith-Schuster but as he threw, Pouncey got run into the pocket by Wilkins. Forced a lofted throw, which was undercut and picked by Xavien Howard.

Blame: Looking back on this play, I think I’ll be less critical to Rudolph than I believe I was originally. Just not much going right here. Good defense from Miami, Pouncey gets walked back on the bull rush, and Rudolph was throwing into tight coverage anyway.

While not excusing the INT, another first drive penalty is routinely putting this offense in 2nd and long. That’s bad enough with Ben under center. Ten times worse with a backup. Those have to go away.

Drive Overview: A drive that actually produced a couple first downs. Imagine that. Slant/flat combo mirrored to each side on first down, Smith-Schuster finding the soft spot in zone coverage for 12 yards. Again, Steelers not afraid to pass early in the drive.

1st and 10 was a duo run that went nowhere but on 2nd down, a nicely timed and executed screen to Jaylen Samuels found 17. Good job by DeCastro and Finney out in space.

On 1st and 10 again, Rudolph took a deep shot versus Cover 1 that narrowly fell incomplete to JuJu. Run game again doing very little, a 2nd and 10 lead run behind Roosevelt Nix losing three. Vance McDonald with a poor block on Malik Hooker, who darted in to make the TFL.

Brings up 3rd and 13. Smith-Schuster again finds the soft spot against the Colts Cover 6 (quarter-quarter-half) but the throw by Rudolph goes through his hands and is picked by Kenny Moore. He returns it 35 yards the other way.

Blame: Not the easiest play for JuJu, reaching out over the middle in traffic, but he’s gotta come down with that ball. Should’ve extended the drive, not ended it.