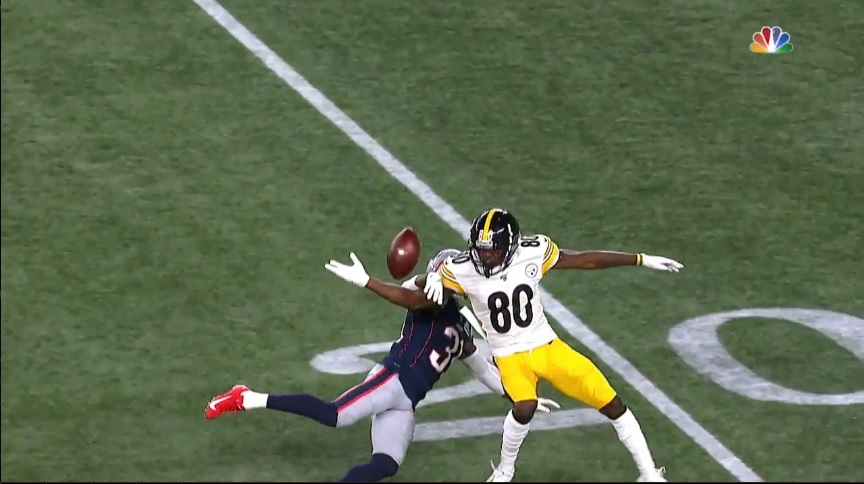 New series I’m kicking off today we’ll be highlighting over the next few weeks. The Pittsburgh Steelers were easily football’s worst offense (I could probably just stop there) on opening drives in 2019. They were the only team not to find the end zone on a first possession, scoring a league-low six points. That came via a pair of Chris Boswell field goals, the first thanks to a 49ers turnover that gave the Steelers the ball in range.

Drive Overiew: This is depressingly one of the most “successful” first drives the Steelers had this season. Third in plays run and yards gained and it actually produced a couple first downs.

Things got off to a good start. Drive began with a toss right to James Conner for four yards. Ben Roethlisberger hit JuJu Smith-Schuster for seven on the next, a nice pivot route to beat man coverage. Used pre-snap motion to ID the coverage. This was a nice design.

Next play was out of empty, a mesh concept with James Conner running under Ryan Switzer to gain nine and a first down. Again beat man coverage. On 1st and 10, they ran a pin/pull to the right that picked up two for Conner. On 2nd and 7, the Patriots countered with a strong run blitz, D’onta Hightower stopping Jaylen Samuels after a gain of two.

McDonald was tasked to come across and block Hightower on a run to the left. He’s way out-leveraged here. Bit of a weird design. David DeCastro and Matt Feiler take pass sets but this doesn’t look like an RPO. The receivers run at half-speed, no one looks for the ball, and Roethlisberger never looks at them post-snap. Difficult box to run into.

Facing 3rd and 6, Roethlisberger took a deep shot to Johnny Holton facing Cover 1 (man-free) coverage. First of many incompletions to Holton last year. Lot of contact by the Pats’ DB on this one, could argue it was PI, but no flag was thrown.

Blame: I would’ve liked Roethlisberger to check out of that 2nd and 8 run with Samuels. Against that defensive front, the play didn’t stand much of a chance. On 3rd down, I don’t hate taking a shot man-to-man and I probably would’ve thrown a flag for all that contact. Little bit of back luck there.

Drive Overview: Ugly sequence. Got five yards on 1st and 10, a Hank concept (curl/flat) out of empty complete to Vance McDonald. Second down was a pin/pull scheme again to the right with Conner. Al Woods (#72) read it well, scrapped over, and made the tackle for no gain.

On 3rd down, Roethlisberger was sacked for a loss of seven. In our sack breakdown, we put half the blame on good coverage and half on LT Alejandro Villanueva.

“Going to go half-and-half here. A coverage sack, it took about five seconds from snap to Roethlisberger getting hit and someone has to find space when there are five eligibles out there. Example of this offense feeling stuck without that true #2 or having that bonafide double-team threat Antonio Brown provided that would open everyone else up.

But Villanueva is beat pretty quickly here and is the man who ultimately gives up the sack. So part of the blame goes on him for muddying up the pocket before Roethlisberger went down.”

Pittsburgh ends up punting for the second straight week.

Blame: Good on the offense for getting themselves in 2nd and manageable. Bad on them for not doing anything with it. We’ll see if that pin/pull scheme keeps popping up like it has been the first two weeks. Seattle’s defense did their job here, to their credit.