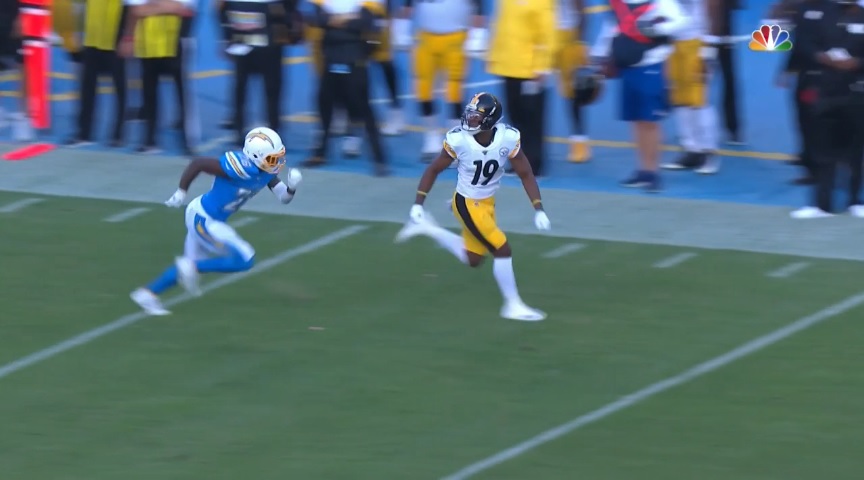 Drive Overview: Things already off to a bad start after Johnny Holton’s kick return takes the Steelers only out to the 13. Passing again on first down, using motion to try to create leverage. JuJu Smith-Schuster comes across the formation on a Hank concept (curl/flat combination, something you see often in their scripted plays) but CB Brandon Carr defends it well and makes the stop immediately for a two yard gain.

2nd down is a mess. Shovel pass to JuJu and he’s tackled in the backfield for a loss of four. Just not blocked well. Blocking scheme supposed to function like power, frontside down blocks, backside guard pulling, but Vance McDonald steps to the outside before trying to wash the LB (#48) inside. Can’t get there in time and the linebacker makes the tackle. 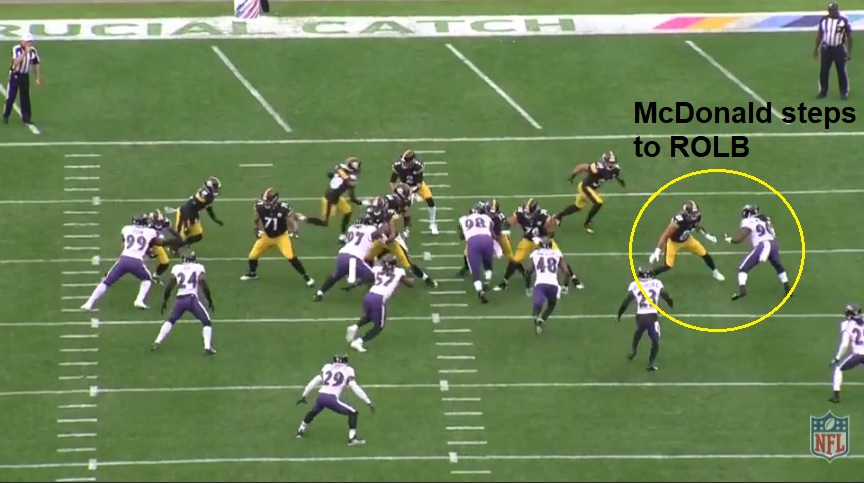 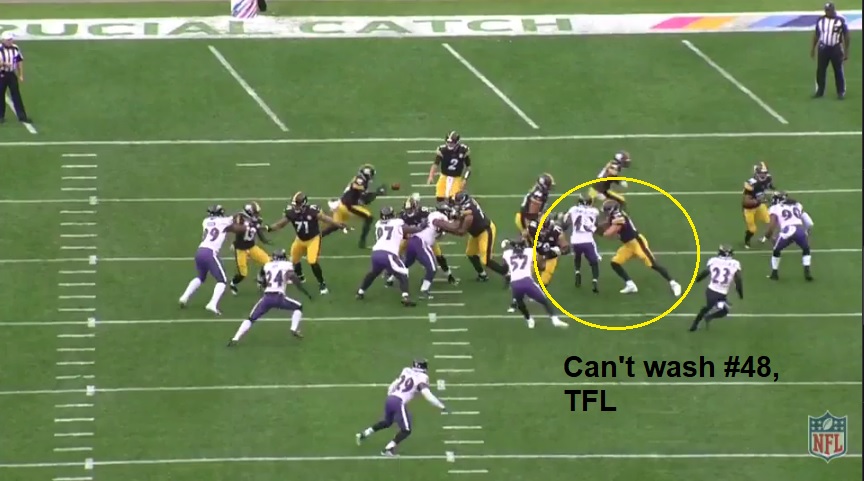 Here’s a look at it.

If McDonald makes this block, maybe the play goes somewhere. Certainly won’t be a loss of four.

Maurkice Pouncey false starts, making it 3rd and 16. Ravens playing loose, deep coverage and Rudolph checks underneath to McDonald for 11. Little bit of breathing room for Jordan Berry, who boots the ball away for a 43 yard net.

Blame: I don’t love the idea of the shovel pass but it was executed poorly. Somehow, McDonald’s name has come up in all three of these articles. The first two for being put in tough positions. This time, he’s either being put in another tough spot (if he’s asked to fake to the ROLB in order to hold him) or he screwed up by not stepping down right away to seal the LB. Throw in a penalty and this drive didn’t have much of a chance.

Drive Overview: For as much as people get on Randy Fichtner for being conservative, “run, run, pass,” it hasn’t shown so far. Even in Devlin Hodges’ first start. Double-move by JuJu, deep shot on the first snap. Hodges’ throw is just poor. Smith-Schuster runs a good route and wins deep but Hodges throws it like it’s back shoulder. Pass is incomplete.

Second down isn’t much better. Split zone run. Ramon Foster and Maurkice Pouncey have to double-team the 1T here. Need to secure that block, especially with the NT shaded to the inside of Pouncey, before Foster can climb to the LB. They do that but Foster struggles to get off the block to climb to #53, who shoots the gap and tackles James Conner for a loss of one.

Also worth pointing out Nick Vannett got bumped off track working across after David DeCastro was jolted back on the snap. That wasn’t the root cause of the play but didn’t help, especially when Vannett needs to work to someone like Joey Bosa.

3rd and 11. Another sail concept to the right (go/corner/flat combo) against the Chargers’ Cover 3. Hodges with a quick throw, checking it to the flat to McDonald. Five yard gain, and the Steelers punt.

Blame: More player-centric here than playcalling. Hodges bad throw on first down, Foster doesn’t execute on 2nd down, and Hodges takes a profit on third and forever.