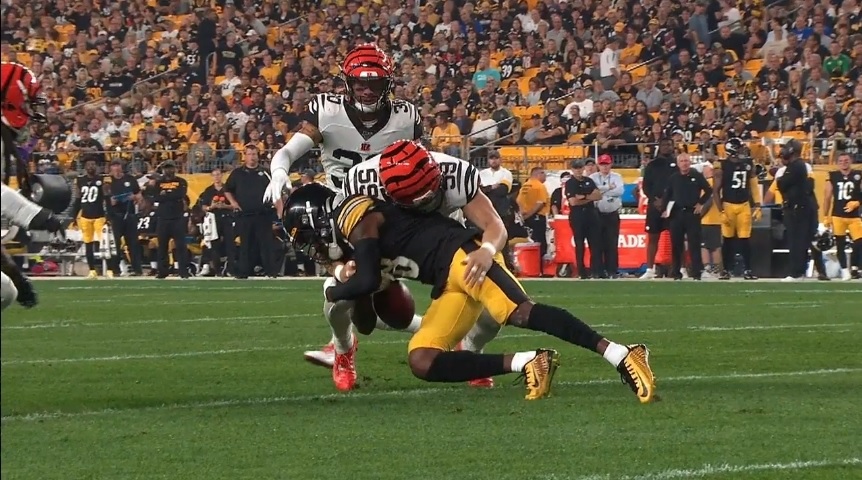 Drive Overview: Look at that, points! That’s all thanks to TJ Watt’s interception that put the Steelers on the 49ers’ 33 yard line but in hindsight, you’ll take it however you can get it.

To the drive itself, the Steelers tried to be aggressive early with Mason Rudolph. Five step drop out of shotgun on first down, running a sail concept to the left. Rudolph reads it but doesn’t like what he sees, Vance McDonald may have been open but the throw would’ve been into traffic, so he checks it down to James Conner. 49ers are all over it, tackling him for no gain.

Brings up 2nd and 10. RPO. Rudolph with the correct read to throw the screen to JuJu Smith-Schuster. Box was -1 for Pittsburgh, meaning the 49ers had one more defender than the Steelers could account for. Ahkello Witherspoon reads it, drives on the ball, and makes the tackle for a two yard loss.

Like we showed in the first article, there’s a leverage issue. McDonald is trying to work out from being attached on the line to block him but doesn’t have the time to get over there and throw a block.

Sets up 3rd and 12. Steelers just trying to make it a more manageable field goal for Boswell, calling a two-way screen. Rudolph hits JuJu for a gain of seven and Boswell hits his 46 yard attempt.

Blame: Don’t really fault anyone for what happened on 1st down. Don’t mind the pass on 2nd down but there’s a schematic issue of how you want to block it up. And third down was waving the white flag and just looking for points, which I understand. Getting into 3rd and forever is the frustrating part.

Drive Overview: After a failed inside zone run on 1st down, the Steelers called Harry (curl/flat combo mirrored to each side, like the Hank Concept minus the over the ball route) on 2nd down. Rudolph fires to Diontae Johnson, who turns upfield but loses the ball. Bengals recover. Drive over.

Blame: Easy one here. Rookie receiver turning the football over. That’s on #18. Carriage of the ball wasn’t great. Needs to hold it tighter to his chest as he’s going to the ground.