Happy Friday to yinz and I hope this past week has gone swell for all.

The 2020 NFL Draft is now behind us as of last Saturday night and now we have six Pittsburgh Steelers selections to celebrate this weekend along with 10 undrafted free agents that have been signed. While there won’t be much to report when it comes to rookie minicamps, OTA sessions and mandatory minicamps this summer, we have more than enough college tape to work with to provide tons of content with until training camp gets underway. Some of that content has begun posting.

Not much is going on with me right now. We’re still hunkered down in Las Vegas and there’s no word as to when the city will get back open. It would be nice to go sit at a blackjack table again at some point and even better with social distancing in effect. I hate it when people try to talk to me wile I sit at a table attempting to count.

In case yinz missed it Friday morning, we pulled off a mega episode of The Terrible Podcast that includes myself, Alex Kozora, Josh Carney, Daniel Valente and Tom Mead all discussing the Steelers 2020 draft class and more. It’s 90 minutes-long and full of opinions and evaluations.

As usual, I have five questions for yinz to answer throughout this first weekend of May and I look forward to reading all the responses. Have a great and safe weekend and I and us will be here if you need us.

1 – Are you in favor of the Steelers getting a long-term contract done with outside linebacker Bud Dupree as long as it averages between $16 and $17 million and adheres the organization’s guaranteed money beliefs, meaning no guaranteed money past the first year? Or, are you hoping that 2020 is his final season regardless?

2 – What was your favorite Steelers 2020 draft pick and which one was your least favorite?

3 – There are expectations that the 2020 NFL regular season schedule will be released in the next week or so. Who do you think the Steelers will open up against and if a divisional game, will it be home or away?

4 – Will wide receiver JuJu Smith-Schuster still be a member of the Steelers at this same time next year?

Remember 2018 JuJu? This is the #Steelers wide receiver the team should expect to have back in 2020 now that he's healthy: pic.twitter.com/LYZBfFRP9Z

5 – Of the three other AFC North teams, rank their 2020 draft classes from best to worst. 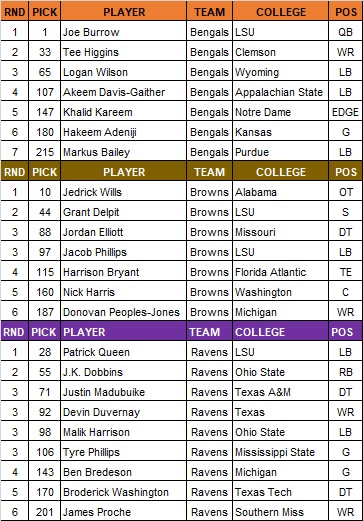 Question 1: Steelers Depot respondents identified 12 of the 19 listed players as the Steelers second round selection. Our favorite, Baylor WR Denzel Mims was still on the board for the second round. 36% of respondents named him. Teams drafted three players we identified in the first round including Michigan C Cesar Ruiz who was our next favorite player with 14%. The New Orleans Saints picked him. The Seattle Seahawks snagged Texas Tech LB Jordyn Brooks and the Philadelphia Eagles got Texas Christian WR Jalen Reagor. Multiple respondents also picked Clemson WR Tee Higgins and USC WR Michael Pittman. Those two were the first two picked in the second round by the Cincinnati Bengals and Indianapolis Colts, respectively. Mims remained on the board, but the Steelers picked a different receiver with their first pick of the draft.  Kudos to Douglas Prostorog for nailing the Chase Claypool pick.

Question 2: As we sit at home in April, our consensus is the Steelers will have a 5-3 road record in 2020. 80% predict a road loss to the Baltimore Ravens. 56% say the Steelers lose in Dallas and a narrow 52% have the Titans over the Steelers.

Question 3: A 20% minority either do not follow college football or have no clear favorite team. Pitt and Penn State tied as the two favorite programs of Steelers Depot respondents with Ohio State a surprising third place. Is it blasphemy to root for both Penn State and Pitt?

Question 4: 81% of respondents believe the Steelers will select an offensive player in the 2020 NFL draft but it is a toss-up if it will be an underclassman.

Question 5:   The Steelers are drafting a running back this year according to 64% of respondents. Though some hoped they will not. The Steelers selected Maryland Terrapin Anthony McFarland Jr with one of their two fourth round draft picks.

Hope all is well with Steelers Depot family. The virus has impacted all of us, but some more directly hit with family members or close friends infected. Stay safe and take care.