Happy Friday to yinz and I hope all are well and remain that way.

Well, we now have less than one week to go before the 2020 NFL Draft is underway. This same time next week we’ll be closing in on the first 2020 selection by the Pittsburgh Steelers. This years draft is really something to look forward to with no sports at all due to the coronavirus pandemic. We hope to keep all of yinz highly entertained throughout the draft and after it.

On Thursday I celebrated my 52nd birthday. Well, not really celebrated because I didn’t get a cake this year as I’m cutting out all added sugars from my diet currently. The day basically consisted of me doing work for the site and then going to the park for an hour with wifey and the puppy. Birthdays just aren’t as big of a deal the older you get and especially after your 50th hits.

I’m spending my Friday night doing some last minute tape grinding on several draft prospects I have not dedicated enough time to. Mostly some defensive and offensive linemen.

As usual, I have five questions for yinz to answer this weekend and I look forward to reading all of them. I hope all of yinz have a blessed weekend and thank you to all that visited the site this past week.

1 – You MUST pick the Steelers one player as their second-round selection from the list of 19 below. Which player are you choosing for them? 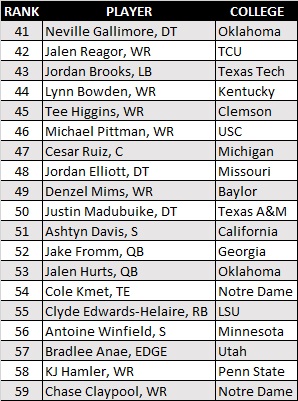 2 – The Steelers will play the Baltimore Ravens, Cincinnati Bengals, Cleveland Browns, Buffalo Bills, Dallas Cowboys, Jacksonville Jaguars, New York Giants and Tennessee Titans on the road in 2020. Tell what their road record will be as we sit here in April and which teams you have them losing to.

3 – What is your favorite college football team?

4 – Will the Steelers first selection in the 2020 NFL Draft be an underclassman and will that player play offense or defense?

5 – True or false: The Steelers will draft a running back this year.

Question 1: Steelers Depot respondents identified 30 players who have a great shot at the Steelers drafting hem this year. Only four players were named more than once. Clemson safety Tanner Muse led the way with three mentions. He was followed by Boise State OT Ezra Cleveland, Boston College RB A.J. Dillion, ad Michigan center Cesar Ruiz. I’ll have to save the list of 30 players to see if any end up Steelers. Anyone that gets two will get a 10-point bonus for the regular season Friday night questions contest.

Question 2: 80% of respondents say that David DeCastro was the biggest All-Decade team snub.

Question 3: surprisingly, respondents evenly split among those that remember the 2005 Troy Polamalu highlight plat ad those that don’t. Some of us like me are suffering from memory loss. Or it could be a sign that the fanbase has gotten younger which is a good sign. Among those that recall Troy Polamalu’s greatest plays, his 40-yard interception return late in the fourth quarter in the 2008 AFC title game against the Baltimore Ravens. His pick 6 gave the Steelers a nine-point lead that iced the game.

Question 4: A resounding 67% rejected the Steelers wearing the 1933 uniform. A lot of objection to the pants. I’m a bumblebee man myself.

Question 5:   we were slightly happier that the Steelers won’t be featured on HBO’s ‘Hard Knocks’ later this summer. The breakdown was 54-46%. Some were conflicted. Several respondents wanted an inside glimpse of the Black ad Gold but not at the expense of distracting the team from the yearly goal of winning a championship. My support for the Steelers featured in the show is how much it helps or hinders a run for the Lombardi. If it helps or has no impact, then I’d want to watch.

Another tough week with the Covid virus. However, trends looking better. Some States may be able to start lifting some restrictions soon.