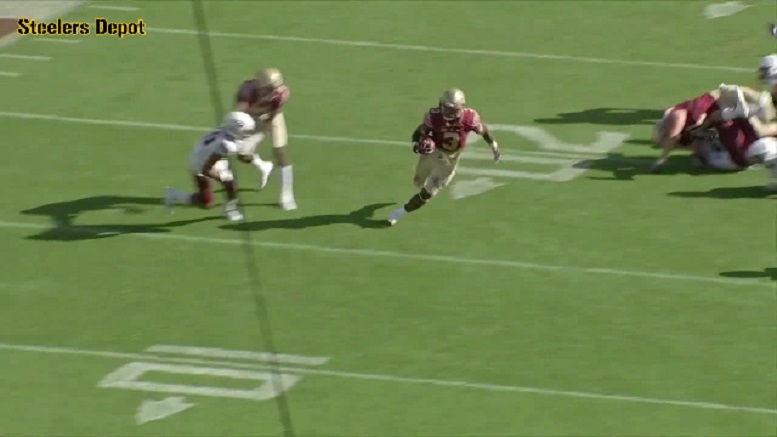 Florida State running back Cam Akers is ranked as one of the top five at his position ahead of the 2020 NFL Draft and quite a few fans of the Pittsburgh Steelers are hoping he’s ultimately selected by the team with one of their first two selections. after recently looking at and contextualizing the double explosive runs that Wisconsin running back Jonathan Taylor had during his college career, it’s now time to look at Akers’ total explosive runs of 20 yards or longer.

In total, Akers, who measured in at this year’s scouting combine at 5103, 217-pounds, registered 19 total explosive runs of 20 yards or longer during his three seasons at Florida state. He did so on 549 total carries. In total, Akers’ 19 explosive runs during his college career totaled 776 yards, which is 27 percent of the 2,875 rushing yards he compiled.

Below is a contextualization of all 19 of those explosive runs that Akers registered during his college career, Below that is video of all 19 runs for you to watch.

One thing that really sticks out about Akers’ 19 total explosive runs during his college career is that the average of his first contact (FC) is a little less than 5 yards past the line of scrimmage. On 12 of his 19 explosive runs he encountered first contact at 2 or less yards. In short, he really had to earn a lot of thee explosive runs by breaking at least on tackle not soon after getting the football.

Akers exhibits really nice balance on a lot of these 19 explosive runs and a little bit of shiftiness on a few. He can break an ordinary arm tackle as well with his power running style. He can also get to the edge and win, as you’ll see in a few of these 19 runs.

Akers, unlike the recently contextualized Taylor, didn’t have a very good offensive line in his three seasons at Florida State. If you remove these 19 explosive runs from Akers’ college career rushing stats, he averaged just 3.7 yards per carry on the other 567 rush attempts.