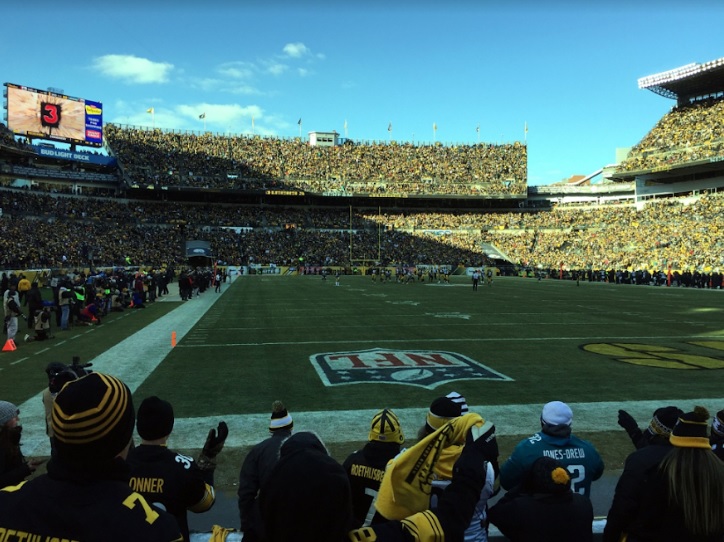 I discussed attendance at Heinz Field two years ago. The question: is attendance a cup half full or empty? Here we are two seasons later. The Pittsburgh Steelers failed to qualify for the playoffs for a second straight year.

Pittsburgh Post-Gazette sports journalist Gene Collier recently authored an article pointing out that while Heinz Field continues to sell out games, seats are often unfilled due to no-shows. Here is link to his article Steelers are selling out Heinz Field, but filling it is another ballgame.

Two years ago, viewership of televised NFL game was down by as much as nine percent. Today, “the NFL has now put together two strong years of ratings growth.” In fact, several primetime slots like Sunday and Monday Night Football had their best ratings since 2016 according to an article by Tim Baysinger of The Wrap.

So, the bars indicate the total attendance in that year while the line shows percentage of seats filled at Heinz Field. The trend indicates that attendance at Heinz Field has slipped slightly since the 2015 expansion. 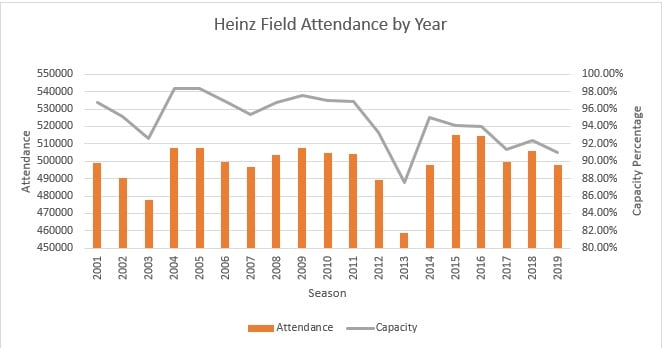 WHERE DID EVERYONE GO?

I talk to Steelers fans all the time. Some regularly attend games at Heinz Field. A few I spoke to said they have not noticed that much of a decline and just enjoy seeing the game in person and being a part of the atmosphere. Others see a big drop in attendance and enthusiasm at games.

Here is the view of Dane. A Steelers fan who has commuted from Baltimore to Heinz Field since 1992:

“I’ve been attending Steeler home games since 1992. From Three Rivers stadium to Heinz Field. Three Rivers stadium had a true home field advantage in that’s the stadium was closed off. The crowd noise was glaring. It affected the other teams. It was intimidating. The stands shook. Moved. It was unbelievable.

Bring in Heinz Field. Beautiful field. Nice surroundings. Yellow seats. The hall of fame (Hall of Honor) memorabilia, the Steeler memorabilia. Nice view downtown Pittsburgh and the hills with the he lift. Unfortunately, the crowd noise leaves the stadium towards the hills. They tried to address this by adding end zone seats. It’s not intimidating at all like Three Rivers.

The fans are different. The fans at Three Rivers breathed, slept talked about Steeler football 24 hours a day. They came to Three Rivers to watch football. No social media no business deals. No partying. It was all football. Hardnosed fans. I loved it. Heinz Field on the other hand to me is all about who to hook up with. Granted when the team is good it gets loud but again the crowd notice escaped. Doesn’t seem like the fans are there for football. When I go to M&T Bank stadium, home to the Ravens it’s just like Three Rivers. Closed off. The noise is deafening. The fans are there for football. No social gatherings. … No places to stand it seems. Heinz field you can stand underneath the scoreboard and the rotundas. At M&T Bank stadium everyone is in their seats. It gets loud. They have an intimidating stadium.”

You may agree or disagree with his perspective, but several other fans conveyed similar opinions. 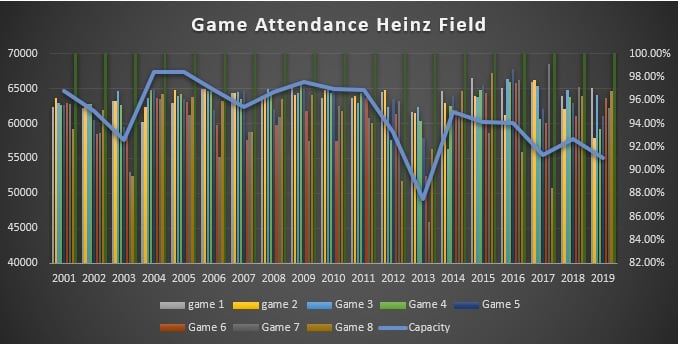 The huge attendance dip in 2013 was after two consecutive 8-8 seasons. Attendance increased sharply the next year that began four consecutive playoff seasons. During the six seasons since 2013, attendance fluctuated between a low of 497,811 in 2014 to the record 514,854 in 2015. However, there is an overall downward trend since 2014.

FANS ARE THERE, JUST HIDING

Folks have observed many empty yellow seats during games. Still, attendance hovers above the 90% mark. Dane mentioned the people standing below the scoreboard and in the rotundas. Those people bought tickets with assigned seats but choose to stand.

Another area are the clubhouses and the Great Hall. I took the photo below during the Sunday night game against the Buffalo Bills this past season. It is the entrance to the Great Hall. The second half had already started. I was there when James Conner scored a touchdown early in the third quarter. It was jam packed inside. 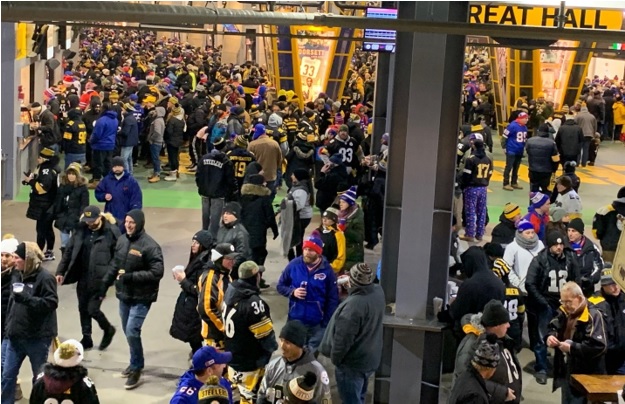 Many people were in line to buy concessions, but more than a few were just hanging out. I watched Conner’s score on a monitor with a gaggle of other fans. It got very noisy, but these were all fans hidden from the television cameras.

Gene Collier noted that fans have not filled Heinz Field in over two years. That is true. Heinz Field held 68,574 screaming fans when the Steelers played the New England Patriots on December 17, 2017 (Jesse James caught the ball). However, it is a myth that the Steelers used to regularly fill Three Rivers Stadium back in the day. In fact, there are just 22 games since 1970 when there was standing room only at a Pittsburgh Steelers home stadium.

Here are the 22 games that the home stadium has been at or over capacity:

BUT ITS NOT EMPTY

On the flip side; there have been just 22 games where attendance has been below 80% capacity. Ironically the most recent occurrence was the next home game after the Patriots game that filled Heinz Field in 2017. It was a meaningless game against the Browns game to finish that season. To put this in context; 80% of Heinz Field today – 54,720 is more seats than Three Rivers Stadium at 100% when it opened in 1970 – 50,350.

In fact, during the past two seasons the Steelers hosted four games that had less than 90% of capacity – people attending the game. However, three of the games were in 2019

From 2000 to 2012 Steelers home games had no more than two home games per season that were less than 90% capacity. Since 2013, three of seven seasons had three or more games below 90% capacity. The Steelers did not make the playoffs in any of those three seasons (2013, 2018, and 2019). I am confident that the Steelers organization is keyed into that drop in attendance.

As an average Steelers fan, I want Heinz Field to have standing room only for every home game. I believe the Steelers are better off than many other NFL teams even those reporting higher attendance (ticket sales). This past season, friends decided to attend a Washington Redskins game at the last minute. They paid less than $10 per ticket.

I was not planning to attend the game against the Buffalo Bills but a few days before made a sudden decision to go. There were plenty of tickets on sell on Ticketmaster and stub hub and other ticket clearance sites. I bought the cheapest ticket available which turned out to be $94 for a seat that was three rows from the very top of the stadium. I was surprised since just in 2016, I was able to buy tickets in Kansas City to attend the Steelers playoff game there for less than $50 a ticket and they were incredibly good seats. However, the threat of an ice storm on gameday helped.

I am not sure if that is the norm for every Steelers home game. Maybe cheap tickets can be found for some games. Perhaps, I will try to track that over the next couple seasons.

Regardless, it can be expensive to attend a game. Consider the average family in the Pittsburgh Metropolitan area. Look at this chart for a family of four (husband, wife, two children):

I used $94 per ticket since that was the least expensive ticket when I attended the Bills game. My other estimates are minimal and do not include transportation or hotels. The average family in Pittsburgh with two kids would have to pay over one percent of their annual income to attend one regular season game!

Pittsburgh does run free light rail to the stadium so you may be able to shave some of the parking costs. But it is easy to see why more families do not attend games. I wish there was a way to make games more affordable but the resell market will keep prices up if the Steelers continue to win. More non-playoff seasons may lead to cheaper prices but who wants to pay to see a losing team?

Winning solves a lot of problems. This past season, attendance dipped following an abysmal performance at the start of the season. It built up once the team began winning and was in the hunt for a playoff spot.

The NFL has tailored the game for television and online viewers. The changes such as more play reviews allow time for more commercial revenue and for replay explanations. For people attending games, this is inactive time spent waiting for the official wearing the orange sleeve to leave the field so that the players can take their hands off their hips and get back to action. Plus, the aggravation of watching referees meeting to discuss the flags they have thrown is a true test of our patience.

That said, Steelers fans still filled Heinz Field to over 90% capacity after a second straight season missing the playoffs. I fear that attendance will slip below that level if they make it three in a row. Let’s hope we don’t find out. Here we go.

I always like to include some music. For many Steelers fans, taking a date to a Steelers game would be like having Two Tickets to Paradise. Eddie Money rest in peace.