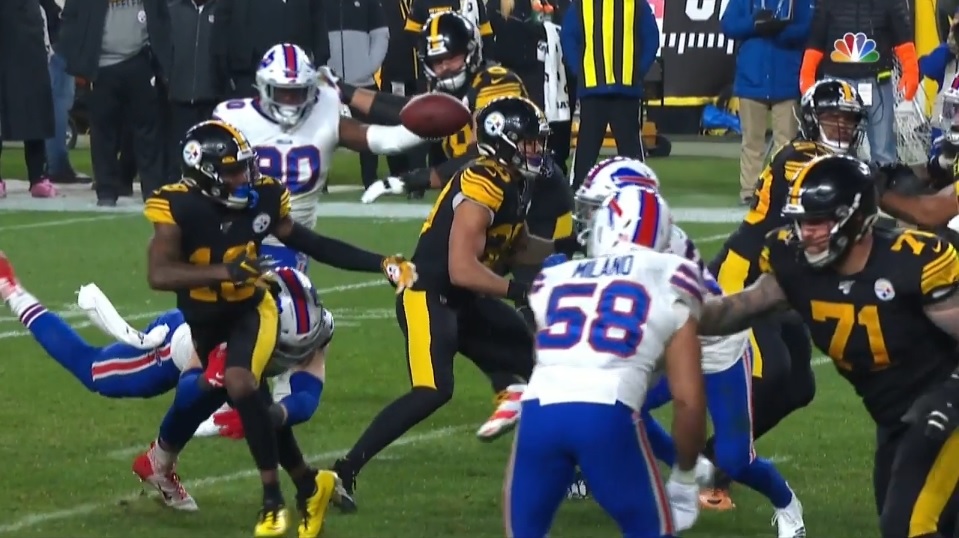 2. Put the Cat Back in the Bag – Oh, Randy. Your love is undying.  The wildcat was effective for one game in September.  Since then, it has been unproductive and now you run it with James Conner who has been out for a month and it ends up being a turnover.  Offense’s that need to rely on gimmicks aren’t good offenses.  Tear that section out of the play book and move forward.

3. Raise Your Hands in the Air – Passes defensed is not a stat that often shows up in conversations when talking about defensive line and pass rushers. The Steelers have a couple of good ones with Watt and Cameron Heyward. Watt now has seven on the year after an impressive showing of athleticism and awareness to break up a pass. That’s good for 4th on the team. Heyward added his 5th knocking down a pass from Josh Allen. Two of the most complete defensive players in the league.

4. Welcome Back, Conner – After missing out on the last three games Conner returned to the backfield and he looked good right away. His first carry went for 15 and he was looking strong. He also showed off his agility making defenders look like they were on skates.  In a close game he received 3 carries in the second half.  Gains of 17, 3 and 5 with the last coming at 2:16 of Q3 in a 10-10 game. Whether he was on a pitch count or not he deserved more than 8 carries.

5. Dodge, Duck, Dip, Dive and Dodge – The rules of dodgeball also apply when you have QB named Duck who had to use each of those moves to avoid the pass rush. The Bills did a fantastic job of mixing up their blitzes to keep the offense confused. They brought it from all sides and the blockers couldn’t handle it leading to 4 sacks, 7 quarterback hits and a forced fumble. Devlin Hodges did not handle it well either and frankly was due for a game like this.  Hopefully he’ll learn from this and get better.

6. Stopping the Herd – I’m curious to see the yards after contact numbers for the Bills running backs. It seemed like the Steelers were getting to them early in the play but just weren’t able to get them down right away.  The combination of Frank Gore and Devin Singletary combined for 102 on 31 carries just 3.3 yards per carry but I think it could have been much lower.

7. Lights, Cam, Action – Watt is getting defensive player of the year love and he should, he has been fantastic but Heyward is the lynch pin in the defense. He might be one of the strongest men in the NFL and he has been one of the most consistent Steeler since he became a starter. In five of the last 6 years he has at least 7 sacks and 10 tackles for a loss. Over the last three years he’s had at least 18 QB hits and this season has already set a career high in tackles with 72. His previous high was 59. He deserves more nationwide attention than he is getting. Every game he makes big plays.

8. To the Left, to the Left – Buffalo had a plan to go to the left after Steven Nelson with wide receiver John Brown. As well as Nelson has been playing this year it seemed like they expected Nelson to be in man coverage and how he was aligned would determine how they would attack him.  Early in the game to counter the speed of Brown he was playing a lot of Off coverage, so they took the short passes in front of him. If he pressed at the line of scrimmage they tried to go deep.  Coming into the game with no interceptions and one third of the pass break ups Joe Haden had I guess they thought he was a safer option.

9. Ball Security – It was ugly all the way around. Four interceptions from a quarterback, especially a rookie, will happen. There were also four fumbles by the offense. One each credited to Hodges and Maurkice Pouncey and two to Diontae Johnson. This is showing signs of being problem for him. That makes 5 on the season, the most for any WR in the league. Some needs to stress this fact with him. Make him carry the ball around the facility like Darnell Jefferson from The Program.

10. Odd Personnel Choice – At the most critical time in the game the Steelers offense was in 12 personnel. On fourth and 7 in the fourth quarter the Steelers had Nick Vannett, Zach Gentry and Deon Cain on the field.  Those three coming into the game had a combined 10 receptions this year. Where was Johnson, your best route runner, when you had to make a play? Where they trying to trick the Bills with two tight ends on the field? The Bills still had 5 DB’s and 3 LB’s on the field. Buffalo even called a time out so Pittsburgh had a chance to change the personnel and didn’t. Just another baffling decision from this staff.