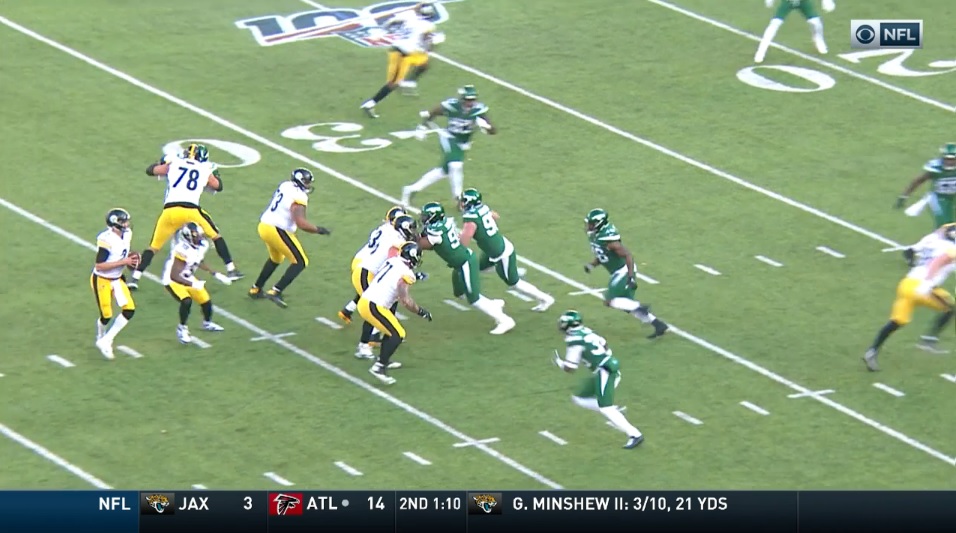 Almost every day leading up to Sunday’s game against the New York Jets, I harped on the Pittsburgh Steelers needing to fix their protection issues we broke down last week. You knew the Jets, led by Gregg Williams, was going to send heat early and often. Their ability to correct mistakes and adjust would be critical to their success/failure.

So how did they do? Not great. Not good enough, at least. That much is clear.

Williams and the Jets dialed up similar blitzes that gave the Steelers problems in their loss to the Buffalo Bills, daring them to adjust. And largely, Pittsburgh struggled, playing catch-up all game long. They played checkers. New York played chess.

It was evident on Devlin Hodges’ first INT. Facing 3rd and 10, the down and distance where Buffalo get creative and won almost every down. Steelers in their six man protection facing a blitz look from the Jets’ ILBs. They ultimately bring five, an ILB and a DB (safety Jamal Adams) while dropping away side OLB Tarell Basham, replacing the ILB as the middle hook defender.

Here’s how Pittsburgh is trying to block it up. 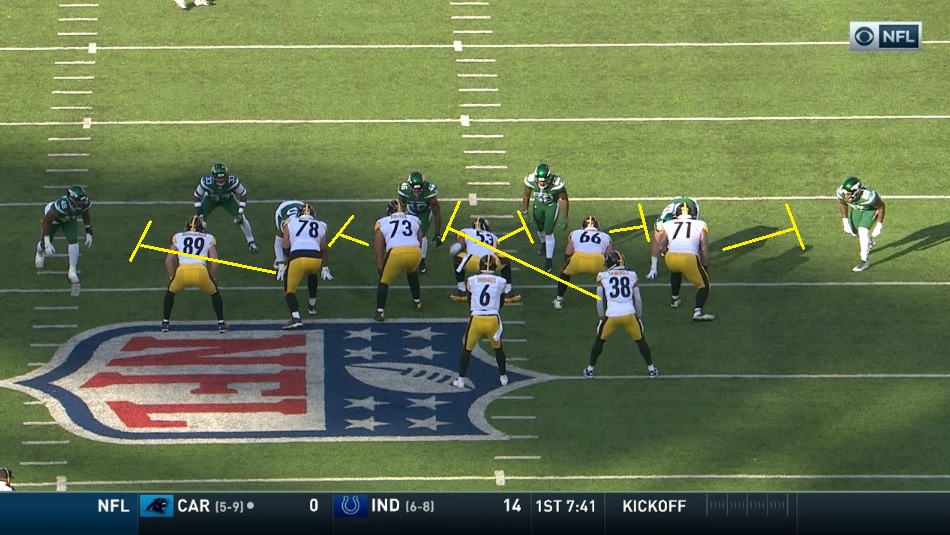 Like last week, the Steelers can’t block it. Adams loops over into the weakside A gap. Jaylen Samuels is forced to pick up the blitzing ILB and Foster, having to slide to his right after realizing the OLB dropped out, simply isn’t athletic enough to block the safety. Adams has a free rush, barrels down on Hodges, who gets locked on his first read and, while pressured, forces the ball to Vance McDonald over the middle. Basham, dropping into coverage, easily steps in front for the INT.

Five man rush vs six man protection. ILB/DB blitz and the DB, while sorta accounted for here, isn’t able to be picked up. Play ends in disaster.

Not the only time you could use that phrase. 2nd half. Mason Rudolph now in the game. Same thing, though we don’t have the benefit of the end zone angle here. Five man pressure, DB and off-ball linebacker blitzing, away side backer dropping out, against a six man protection.

Last week, we twice noted Matt Feiler coming off his responsibility to needlessly picking up the DB off the edge, which the RB is schemed up to block. Once, ok, sometimes wires gets crossed. The fact it happened again was unacceptable.

Third time isn’t the charm because Feiler did it again against the Jets. To be fair, this is a little different, it’s the blitzing LB he works off, not a hand-down DE, but the result is the same. Feiler and Samuels on the DB (Adams), the LB free.

I can’t understand why Feiler is leaving his gap. He has his eyes locked on the LB so Samuels – and again, I think the DB is the back’s responsibility anyway – is working towards the DB. Then Feiler changes course, works to the DB, and expects (?) Samuels to be able to seamlessly adjust too? Here, they have the numbers to block it up, are in position to do so, and just…fall apart.

Some could argue David DeCastro should’ve taken the LB, maybe that’s what Feiler is thinking, but DeCastro is keying a possible stunt between the LDE and the LDT. LDE crashes in you’re staying tight to Maurkice Pouncey for the DT to loop over.

This was a game that would shine a light on the Steelers’ line. On coach Shaun Sarrett, on the players for their ability to execute. For all the issues the offense has had this year, all the changes with the skill players, the offensive line has largely remained the same and even replacements like BJ Finney are competent players well ingrained in the system.

It’s not like the line has played this poorly from a preparation and recognition standpoint all year. There have been failings, some rough stretches, but largely against elite talent, like Nick Bosa working over Alejandro Villanueva in Week 3. At least I *get* those moments. Some really talented players making really talented players. Happens.

But these problems are coming out of left field. Pittsburgh is unusually bad in blitz pickup, even compared to just a few weeks ago. It’s a unit wide failure, from players to coaching, and has me worried about the state of this line for the first time in a long, long while.