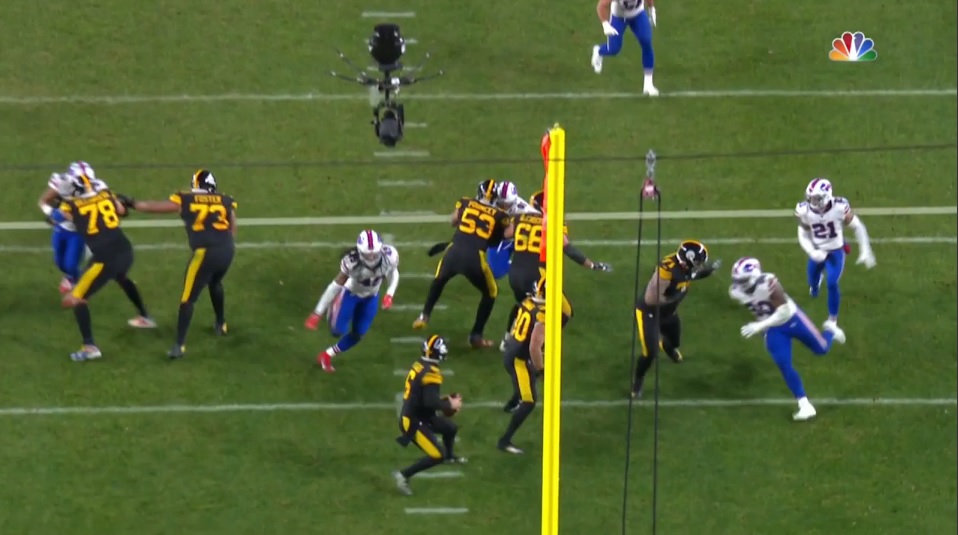 There’s no doubt in my mind the Buffalo Bills outschemed and outcoached the Pittsburgh Steelers’ staff in Sunday night’s loss. Nowhere is that clearer than all the ways Buffalo attacked and stressed Pittsburgh’s pass protections.

Today, we’re going to do an in-depth review of how the Bills left the Steelers’ o-line looking lost. And although you have to hop in the wayback machine for it, this isn’t the first time we’ve seen Pittsburgh pummeled in this way.

Five plays from Sunday, all coming on 3rd or 4th down, to illustrate this.

Pre-snap, Buffalo shows an interior blitz threat with both ILBs mugged into the A gap. Steelers in six man protection. BoB protection, (standing for big on big or backs on backer) a man scheme. Here are the line’s assignments. 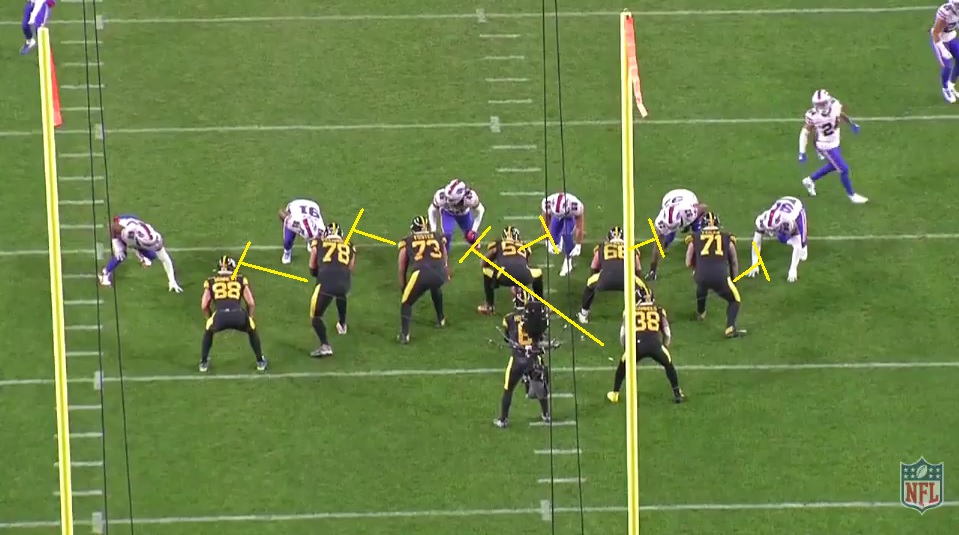 On paper, it’s blocked up even if both ILBs come. But on the snap, ILB Tremaine Edmunds drops and CB Taron Johnson rushes from his nickel spot. 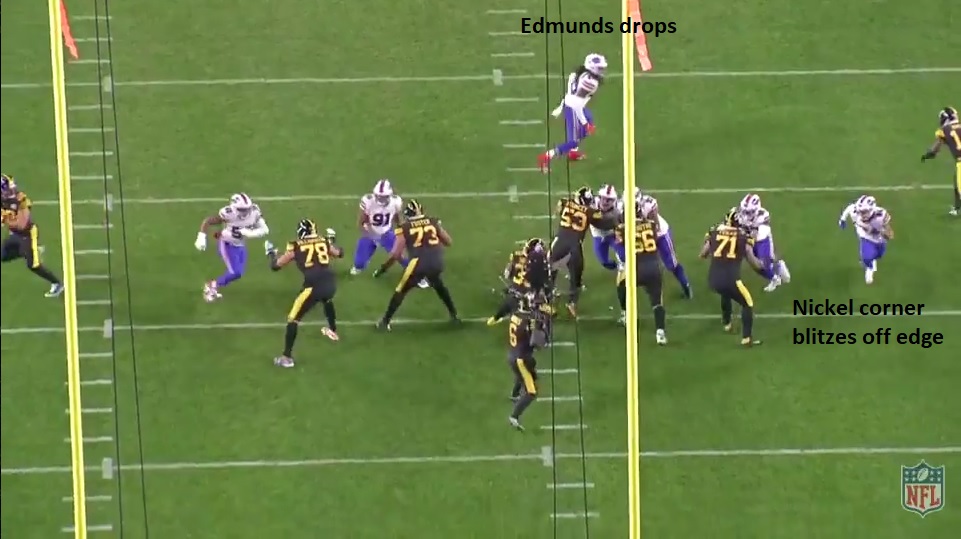 So Samuels steps into the A gap to pick Edmunds up. Only he doesn’t come. Now there’s no one to block Johnson, the nickel rusher. Now they’re in trouble.

Matt Feiler only makes things worse. He comes off his assignment, the LDE, to pick Johnson up. Bad idea. Do your job, carry out your assignment, and take the inside most threat, which is the end, Shaq Lawson. Had Feiler done that, this thing may have been blocked well enough. As soon as Samuels realized Edmunds dropped, he had the IQ to look for another rusher and probably saw Johnson blitzing with his peripheral vision. So Samuels backtracks to try and pick it up and block the blitzing corner. 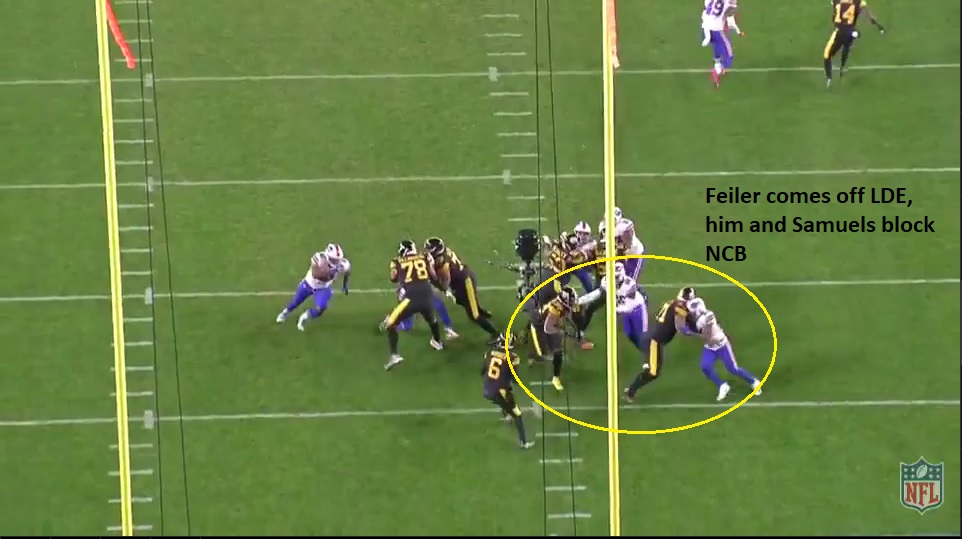 Now Feiler and Samuels are attacking the same guy. Lawson is now unblocked, pressures and buries Devlin Hodges, who is forced to quickly check the ball down to Nick Vannett, who has no chance after the catch and is tackled immediately for no gain. Steelers punt.

Same down and distance later in the first half. 3rd and 10. Now Pittsburgh is ready for the nickel blitz. Man blocking up front with Conner keying any DB pressure. Here’s the pre-snap blocking scheme. 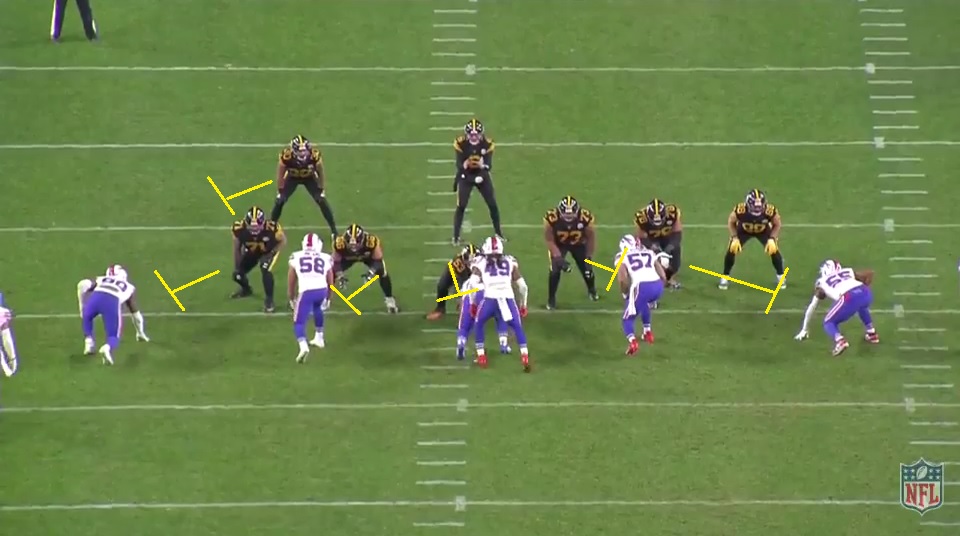 And the Steelers are ready for it. Safety Jordan Poyer comes off the edge. Conner is there to pick him up. Problem solved, right?

Buffalo throws in a new wrinkle. Tremaine Edmunds, who dropped out of the A gap on the previous play and here, lines up in a 00 tech, off ball and behind the NT, now blitzes. Buffalo is still rushing just six, dropping the RDE into coverage in a classic, Dick LeBeau blitz, and someone who can cut any “hot” throw by the QB.

There’s no one assigned to pick up Edmunds. It isn’t built into the blocking scheme. Now you have a 4.4 LB coming in free up the A gap. 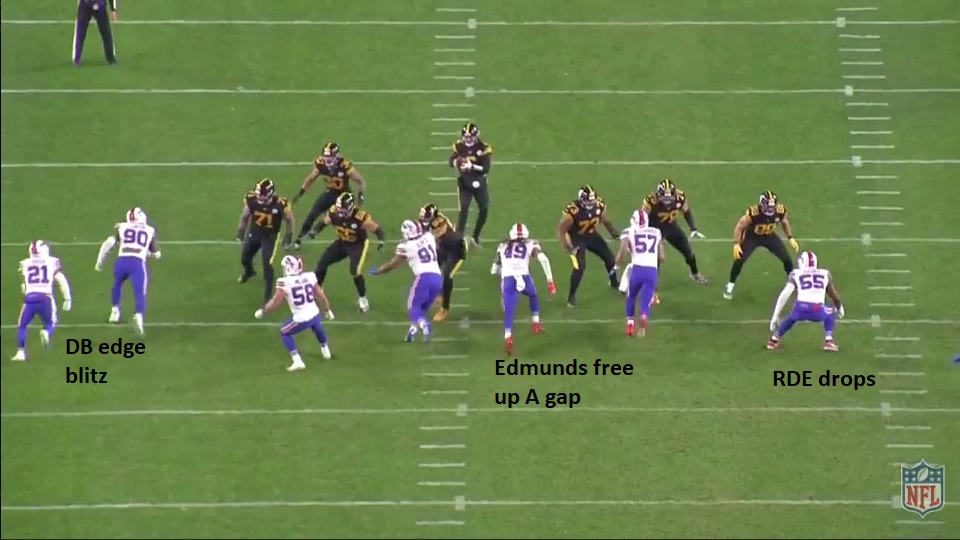 Hodges has to spin and roll left, pressured, and throws inaccurately and incomplete. Steelers punt. Again.

Ok, now the Steelers have it figured out. They’re getting an aggressive look from the ILBs in the A gaps, just like the first play. They don’t know for sure who is/isn’t coming. But here’s the plan. The ILB A gap rush has to be top priority. More important to block a bigger athlete coming straight downhill in the A gap than any potential nickel/edge blitz from a DB. So that’s Conner’s first read. Blocking scheme is the same for the OL.

If Edmunds drops out, then Conner knows the nickel pressure is likely, so circle back and pick it up. Conner is reading inside/out. Blocked up, taken care of, we’re good to go. 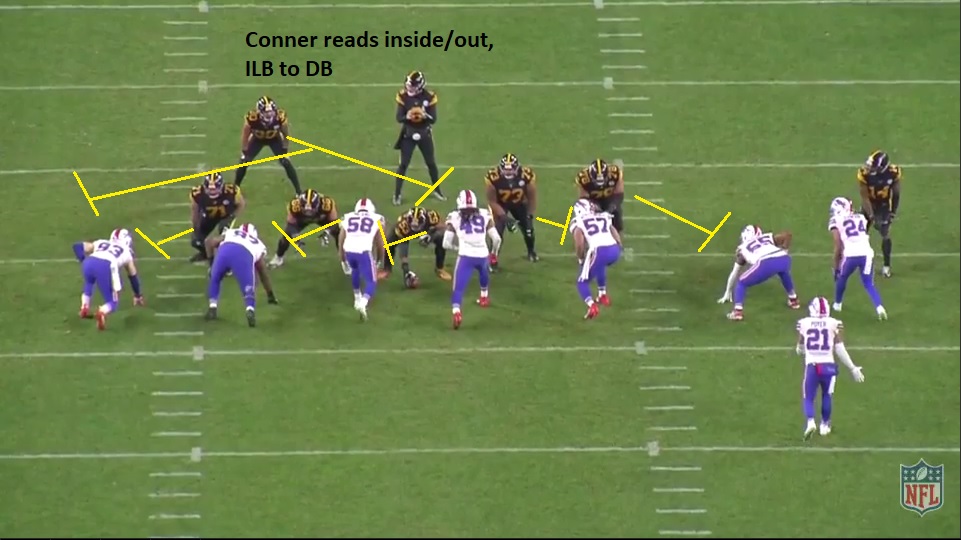 And Edmunds drops out. So Conner takes a step in, sees him drop, and gets his eyes to the edge. Sure enough, here comes safety Micah Hyde. 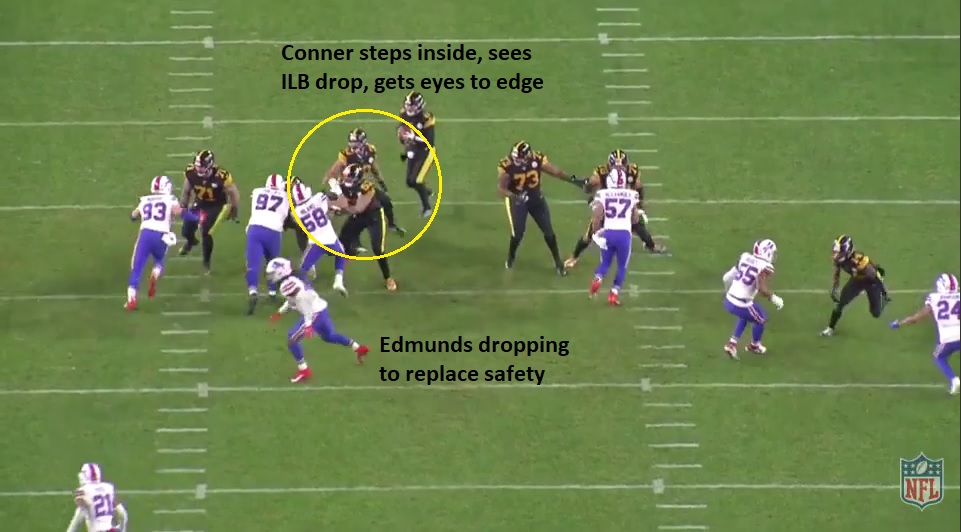 So we’re all good here. Conner is going to pick it up, rest of the line does their job, and even with the RDE dropping again, Ramon Foster gets his eyes inside as soon as he sees it, everything should be taken care of.

This time, the players screw it up. Specifically, Matt Feiler. For some reason, for the second time of the game, he comes off his responsibility, the RDE, to pick up the blitzing Hyde. Just as he did on the first play. Now Conner and Feiler are blocking the same defender. And so again, the RDE is unblocked. 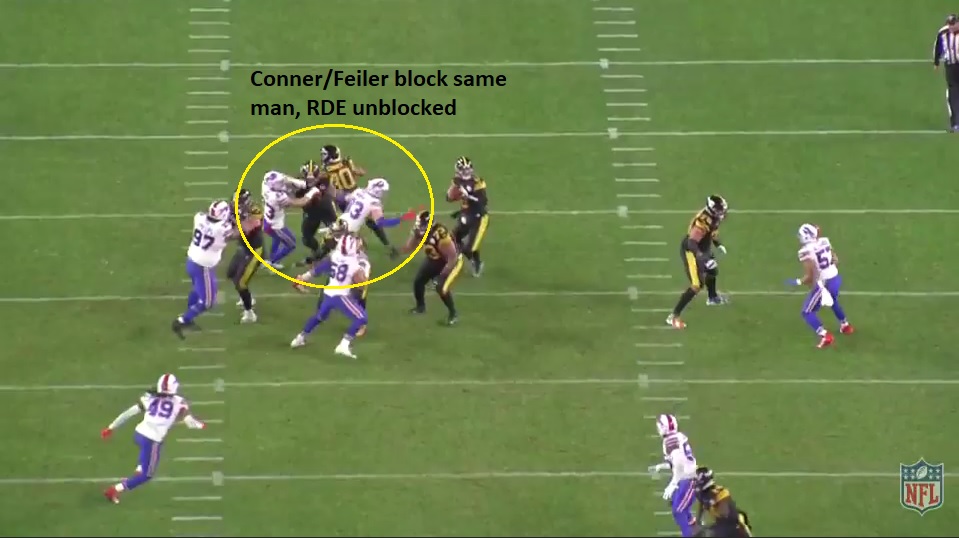 And Trent Murphy is the lucky man this time, sacking Hodges. Steelers punt. Third time pressure has forced it.

Steelers gotta expect blitz on any 3rd and long because that’s largely what they’ve gotten and certainly haven’t been able to handle. Same scheme as before. BoB protection, Conner reading inside/out. ILB comes, hes’ gotta pick him up. 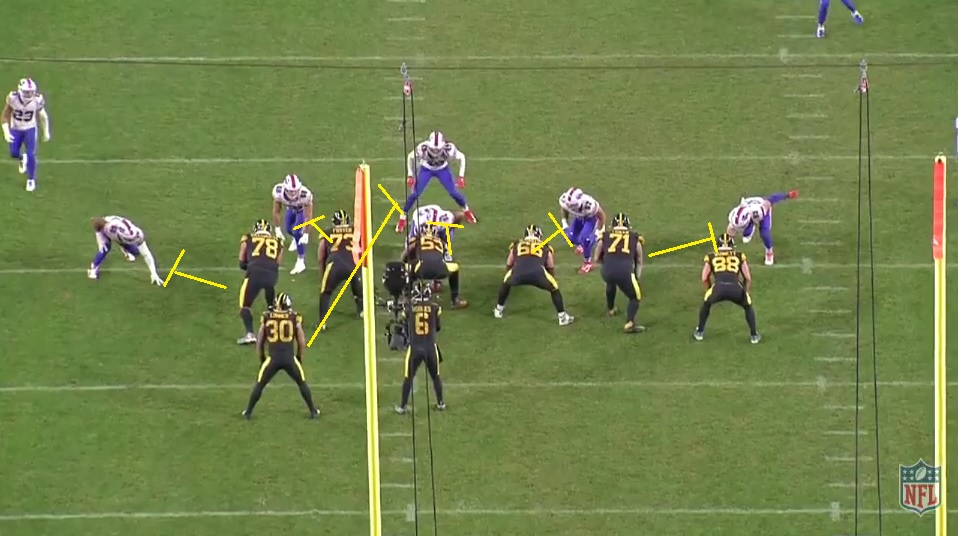 This time, Edmunds rushes. So Conner is inside and picks him up. Rest of the line does their job. DeCastro slides down to help out in the A gap because the RDE dropped out but that’s fine. He’s now uncovered and is finding work.

But the Bills are bringing heat again. It’s Hyde, the safety, blitzing off the edge. 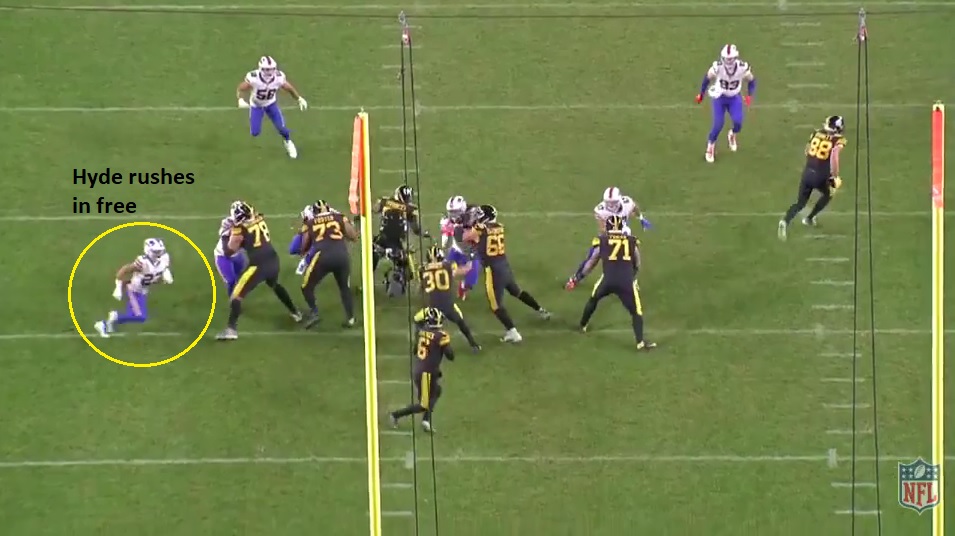 Here, there’s nothing built into the Steelers’ protection to pick him up. There’s no answer to block a potential ILB blitz and a nickel/edge blitz and still block everything else up. So Hyde is blitzing in free. That means this throw must be “hot,” meaning, if he comes, the ball has to come out right away because the DB blitz won’t be picked up.

But there’s no hot route built-in. Nowhere for Hodges to immediately go with the football. No receiver has their eyes around and vision on their QB. Partially because the Bills are blitzing away from the trips side so the receivers don’t know the nickel corner is coming on the other side of the field. 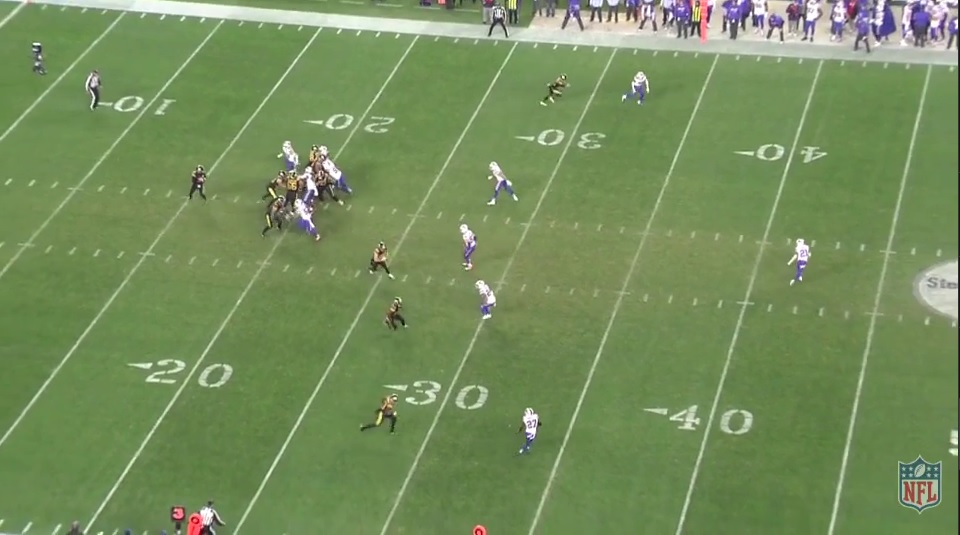 So Hodges is forced to spin out, scramble to his left, and throw the ball away. Another failed conversion, another punt.

This is the play out of 12 personnel, which seemed curious at the time, but may have been used to have an extra tight end in to discourage a heavy blitz.

Bills are bringing nickel/ILB pressure again. Zach Gentry check/releases into his route, it would’ve been smart for him to stay in and pick up the nickel pressure (maybe he screwed up his assignment?) because again, there’s no way for the line and the back to be able to pick it the blitzing DB. 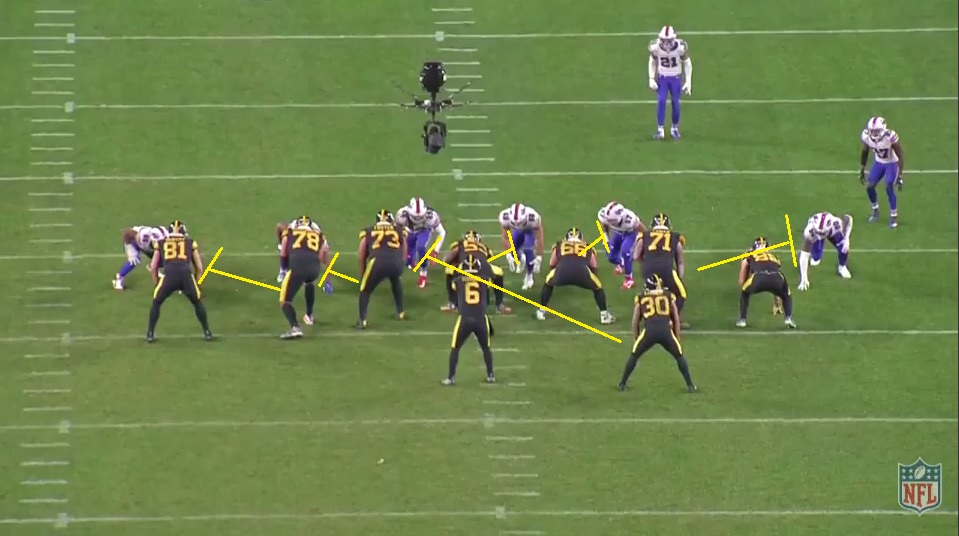 Conner picks up the ILB, cornerback Taron Johnson comes off the edge and there’s no answer to block him up. Free rusher, ball has to come out, but it’s 4th and 7, you’re trying to let routes develop, and Hodges has to throw up a lame duck that gets picked off. 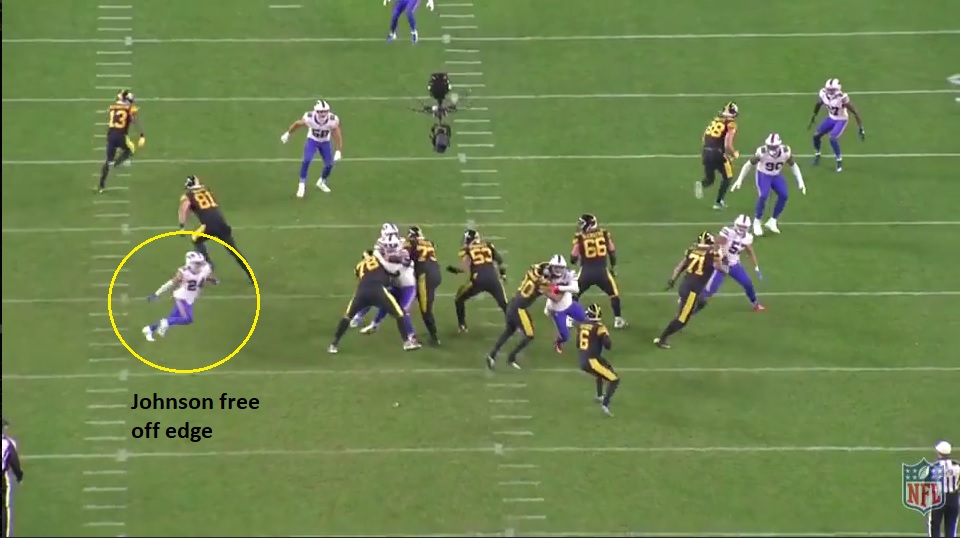 This doesn’t even get into some of the stunt pickup issues that crept up on the final drive. We’ll get to that in our sack breakdown later in the week.

The point here? Pittsburgh was simply overwhelmed. They were burned early, tried to play catch up in the middle of the game, had communication breakdowns that led to more failings, and at the end of the day, simply didn’t have an answer for the Bills’ nickel blitz. Buffalo not only won the battles but the war and it wasn’t close.

There’s one other layer. It might be the most important, or at least the most interesting, of them all. Think back to the last time you saw the Steelers do this bad of a job in pass protection? Not just to a man, Jonathan Scott’s butt block will live in infamy, but schematically, it’s hard to remember a time things looked so out of sorts. A game were the Steelers felt helpless, had zero answers, and simply weren’t prepared for what the defense was going to do. Hodges admitted as much after the game, saying they didn’t anticipate Buffalo to blitz as often as they did.

The game that jumped to mind? 11 years ago. 2008, Steelers/Eagles. That day, Ben Roethlisberger and Byron Leftwich were sacked a combined nine times as the Eagles won 15-6.

In 2015, Larry Zierlein, the Steelers’ offensive line coach for that 2008 failure, streamed a video on what happened that day. I don’t have the video archived anywhere (if you somehow have it, let me know) but I wrote an article recapping his breakdown and included a couple of screenshots.

Here’s what I wrote based on what Zierlein said.

“With each defensive back responsible for his receiver, and a six man protection, mathematically, the offense was safe. With the safety playing deep, the maximum the defense could bring and still cover is six, meaning the offense had enough to block. Six on six.

As Zierlein tells it, the Eagles attacked this by blitzing the nickel corner and inside linebacker to the running back’s side. The right inside linebacker, the center’s responsibility, would buzz to the blitz side and wall the #2 receiver.

This puts the running back in conflict. He is responsible for the inside linebacker and naturally picks him up. There is no one left to pick up the corner blitz.”

Take a look at it yourself. Here’s one of several examples. RB pinches in on the LB in this aggressive look, DB comes in free despite being in a six man protection against a five man rush. Having the numbers to block it up and having the scheme to block it up are two different things.

Sure sounds familiar. It is almost the exact same issue Pittsburgh ran into Sunday.

In 2008, the Eagles’ DC was the late, great Jim Johnson. Guess who else was part of that staff? A linebackers coach and man who would be promoted to DC in 2009.

11 years later, McDermott exploited the same weaknesses the Eagles found. It didn’t end in a nine sack massacre. But the pressure, and its effect, was all too familiar. Pittsburgh’s offense sputtered, repeatedly failed on third down, and put up just 10 points.

What Pittsburgh needed to do was one of two things. Utilize a seven man protection, as Zierlein said the team ultimately did in ’08 to try and stop the bleeding, or have a built-in hot route for these situations to protect against the unblockable nickel blitz. The Steelers did neither. That’s why they look as overwhelmed and downright terrible. Unprepared, which is a reflection of OL coach Shaun Sarrett, without the ability to adjust in-game. It’s the first time all season I’ve missed Mike Munchak.

And these problems proved costly in a crucial, playoff race loss.