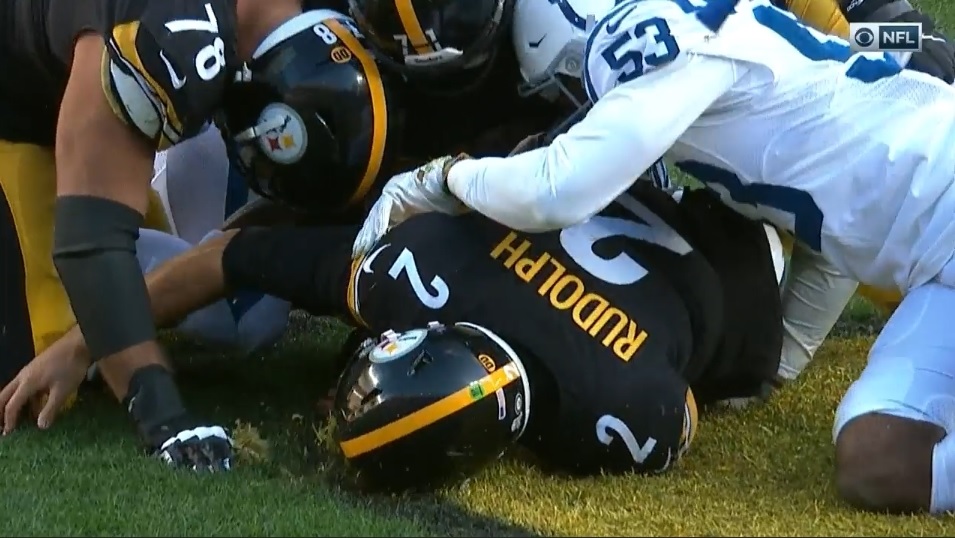 Just one sack to review from Sunday’s win over the Indianapolis Colts. Let’s take a peek.

Dave Bryan broke this one down yesterday and I agree with his conclusion so I won’t spend too much time on this play. Go check out his article on Mason Rudolph’s sack/safety for his take. But this sack is 100% on him. 3rd down, you’re leading, and standing in your own end zone. Gotta be decisive, get the ball out quick. Whatever you do, have to get out of your end zone, have to maintain possession of the ball. He failed on both those counts.

Like Dave said, he should’ve hit the pivot route to Diontae Johnson. But he second-guesses himself, pump faking and then sliding back and to his right. Like one of the sacks he took last week, he’s sliding into pressure. This time proves even costlier. Gets blindsided by Justin Houston, loses the ball, and Alejandro Villanueva luckily recovers.

Can’t blame Villy here for Rudolph holding onto the ball for over 3.5 seconds, and getting depth to make it easier for the pass rusher to get past his blocker.

Throw the ball to Johnson. Throw it way in front for the incompletion if you’re that worried about getting picked. Step into the pocket and try to take off. Hitch up and go to your next read. Do anything other than hold onto the ball and drift. Another one of those “young guy” mistakes and Rudolph’s pocket presence has somewhat alarmingly regressed the last two weeks.

We’ve now charged Rudolph with more sacks than anyone else on this team. He makes up for three of the eight allowed by the Steelers this season. That’s as many as the entire o-line combined.

None. Good job, everyone.