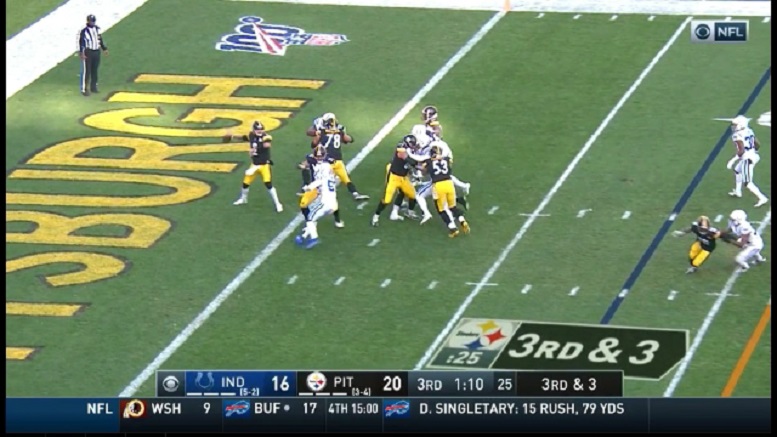 More than just a few times I’ve observed Pittsburgh Steelers quarterback Mason Rudolph not pulling the trigger on pass attempts when he probably should have. In Sunday’s game against the Indianapolis Colts the play that resulted in Rudolph being sacked in the Steelers end zone for a safety was probably another one of those times.

On the play in question, third down and 3 from the Steelers own 8-yard-line, Rudolph seemingly got an expected coverage look, cover-1 man. He motioned wide receiver Diontae Johnson in tighter to the formation as part of a bunch look presnap. At the snap of the football, Johnson ran an in-and-out route against his man. However, going into his break, Johnson’s inside foot slid on the grass just slightly and as he was breaking back out toward the sideline his defender seemingly hooked and may have even slightly tugged his jersey.

That slight hiccup of Johnson coming out of his break seemingly spooked Rudolph as he pulled the football back down after looking like he was cocked to deliver it to the rookie wide receiver. After pulling the football down, the pass rush was on top Rudolph, who was then attempting to escape the pocket to his right. The result was him getting strip sacked and fortunately tackle Alejandro Villanueva was there to fall on the loose football for a safety instead of a Colts fumble recovery in the end zone for a touchdown.

Even though Johnson seemingly didn’t come out of his break cleanly, Rudolph should have trusted the read and thrown the football out in front of the rookie wide receiver in hopes he could have made the catch. At worst, the throw would have been incomplete and the Steelers would have subsequently punted on fourth down. He should have been more aware of where he was on the field and trusted that he could of made a throw that only his receiver would have been able to catch.

It will be interesting to see if Rudolph is asked about this play when he next meets the media ahead of Sunday’s game. If he is, I’m guessing he’ll say he should have trusted Johnson instead of pulling the football down while standing in his own end zone.