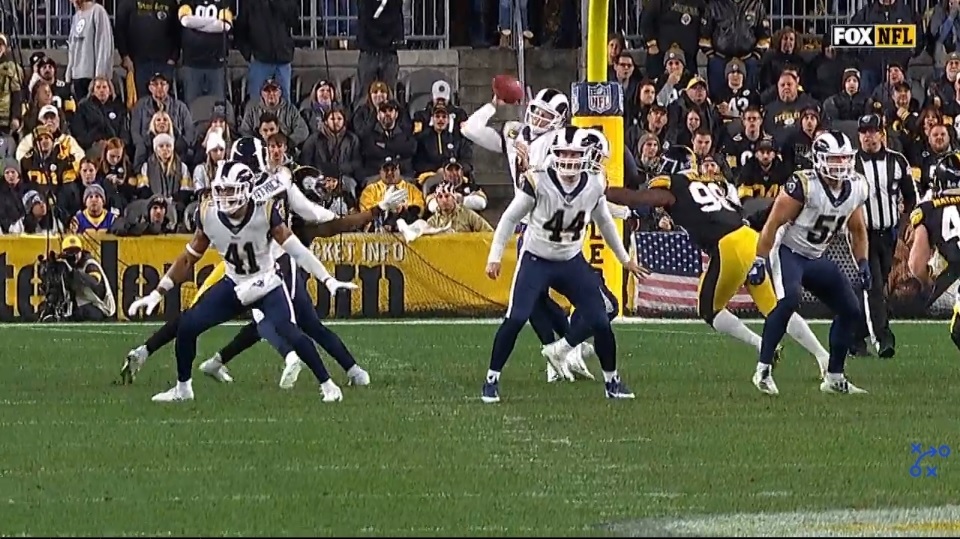 It’s 4th and 1 on the Rams 29. They’re down a score. Sean McVay brings in his punting team but not for Johnny Hekker to boot the ball away. They line up in a fake, the Steelers’ defend it, get pressure, and that’s how Trey Edmunds became the first RB in 31 years to intercept a pass.

It was a critical moment of the game, even if the Steelers – somehow – didn’t wind up getting points from that drive. To most fans in the stands, probably a shocking one.

To Mike Tomlin and the rest of the coaching staff? A moment that was fully anticipated.

“No, we work in and have rules for the obscure, particularly in that phase,” Tomlin said Tuesday. “You never know what you’re going to get. You better have built-in principles and rules to minimize the unforeseen, but it’s not like that’s unforeseen. I mean that guy’s probably thrown 14, 15 passes in the course of his career. We had bunch of video evidence of that personality and what they were capable of in those moments. So I wouldn’t even characterize that as unforeseen.”

As we wrote in our scouting report, the Rams are the league’s most fake-heavy team. As a punter, Hekker offers a unique skillset. At Bothell High School in Oregon, he played QB, leading the charge of an offense that scored over 30 points a game his senior year to the state title. Los Angeles has utilized that skillset throughout his career, Hekker has 21 career pass attempts, including one successful fake earlier this year against the Atlanta Falcons. In fact, earlier in Sunday’s game, the Rams showed a similar fake punt look. The Steelers adjusted, the Rams opted against trying it, and took a delay of game penalty instead.

“We didn’t necessarily know where it was going,” Trey Edmunds said after the game. “But we knew when we saw him move up, he was a heck of a thrower. He was a capable guy of making that throw. He had some receivers on the outside that can get open. We knew we had to put pressure on him. We also knew we had to cover. He launched one my way and I reacted.”

On that play, Vince Williams and Jordan Dangerfield got pressure on Hekker, forcing a hurried and awkward throw that fell right into Edmunds’ hands.

Yes, that’s Trey Edmunds with the pick on a fake punt! #Hokies 🦃 | #HereWeGo

Those moments show which teams are well-coached and which aren’t. The ones who are find themselves prepared for the fake, show no confusion, and execute. The ones who aren’t find themselves in a free-for-all and probably giving up a big play. Much like the rest of this team over the last month, there was no panic, no chaos. Just execution, something that’s been the storyline during the Steelers’ four game win streak.