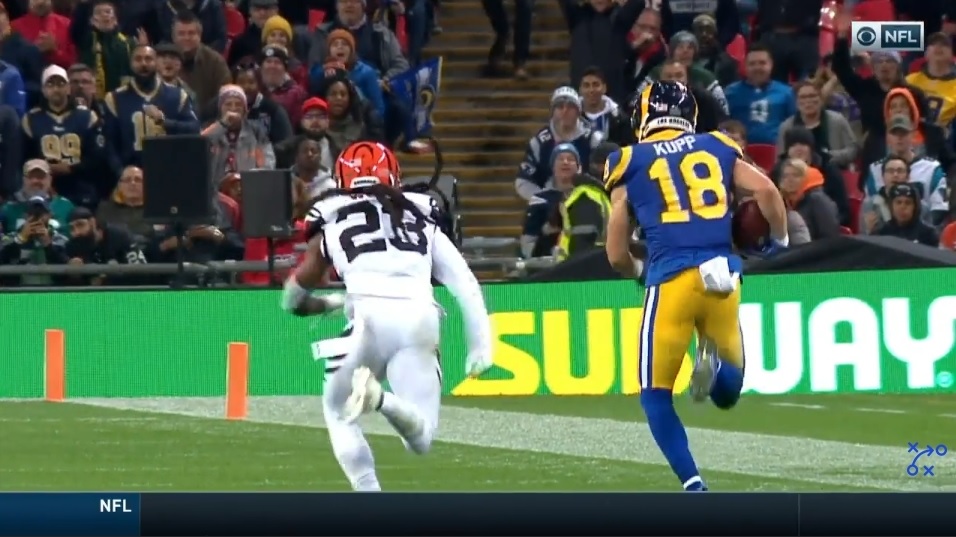 It’s not quite as fierce as it’s been in past years but still a potent attack capable of creating big plays. A group still led by Todd Gurley but given his chronic knee problems, the Rams are being much more careful about his snap count. He has just 92 carries in his first seven games compared to 144 carries in seven games last year. Numbers are down too, his YPC falling to 3.9 YPC. But obviously, can’t overlook him.

Behind Gurley sits Malcolm Brown, expected to return this week after missing time with an injury of his own, and rookie Darrell Henderson. Henderson is an exciting player who reminds me a lot of Marlon Mack. Josh will talk about it more below but Henderson has that same ability to create with some gamebreaking speed (ran a 4.49 at 208 pounds).

Watch out for the receivers to get involved too. Robert Woods has 12 rushing attempts this season, including four last weekend against the Cincinnati Bengals.

Last year, the Rams were almost literally an exclusive 11 personnel team. They’d be in that grouping about 95% of the time. It worked well for them, they obviously made it to the Super Bowl, but also made them a bit predictable. Varying things up a bit this year. Seeing more two and three tight end sets. 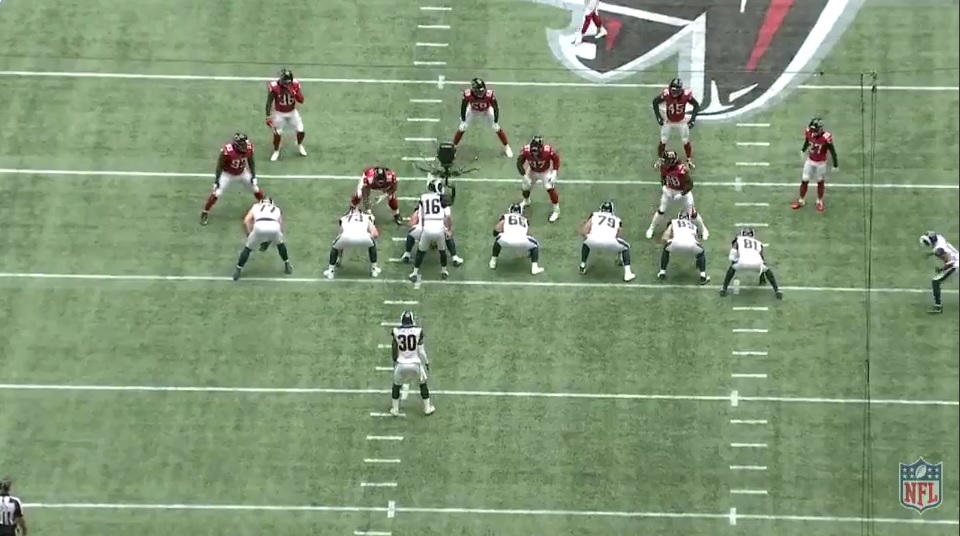 Heavy zone team and one that will use outside zone. That’s what made CJ Anderson a good fit late last year. One generality to make about the Rams’ offense is that they run their zone scheme from under center and run their power scheme out of the gun.

Some other stats. 20th in runs of 10+ yards, a pretty big stark contrast from last year when they finished third in the league in that category. So not getting enough explosive runs. They’ve a little better though still average on 3rd down (40.4% – 15th), and in the red zone (61.3% – 13th).

Of course led by Jared Goff having a good but far from great season. Completing 61% of his passes, not a great figure (and he’s below 60% his last four games) with 11 touchdowns, seven picks. Sacked only 12 times in eight games.

Cooper Kupp is having a monster year with the ability to take over games. He has five 100+ yard receiving games this season and coming off an insane, 7 receptions, 220 yards, one touchdown performance before the bye against the Bengals.

As Mike Tomlin pointed out in his Tuesday presser, no receiver in football is more productive on third down than Kupp. He’s tops in football in total receptions (21) and first downs (17). Sean McVay designs concepts we’ll talk about in a second to get him the ball in those crucial situations.

Brandin Cooks won’t play, still dealing with concussion symptoms, but they have Robert Woods and an athletic tight end in Gerald Everett, averaging more than 11 yards per catch this season. Josh Reynolds ran with the chance he got in Cooks’ absence with a 3/73/1 line versus Cincinnati. The number of weapons they have make for one of the NFL’s most explosive pass games – 34 passes of 20+ yards, tied for 6th most in the league.

McVay and the Rams’ offense love to use playaction. Loves to use it on 1st and 10 and on the first play of drives to try and hit a big play early. Obviously a variety of concepts they run behind it. Sometimes Yankee, sometimes Y Over, and it can be a fake handoff or a fake toss that gets Goff rolling out to the right. Goal is to to get the LBs to step up and then throw behind them.

He also likes to use levels concepts, or run a Hank route (WR/TE five yard curl over the ball) with a dig route behind it. They love to use dig routes on 3rd run with Kupp as the #2 and get him the ball.

And in general, they are effective with spacing concepts to beat man and zone. Just a sound route scheme that throws a lot at you and seems to always have an answer against what a defense may do, which is what makes their pass game so potent and why McVay is so highly thought of.

Last thing. Watch out for those tricky, tricky Los Angeles Rams. Especially coming off a bye. Against the Bengals, they ran a reverse flea flicker for a 65 yard TD to Kupp (the Bengals did come apart at the seams here, to be fair). And no team runs as many punt fakes as LA and punter Johnny Hekker. He has eight attempts since 2017. And it’s hard to find a real trend of when they like to do them. I charted the distance, yard line, and quarter of those eight.

In six of those eight fakes, it was a one-score game and they were down/tied six total times. So that’s one hint. But I would be on alert for any punt fake and wouldn’t worry about a strong punt rush this week. Play it safe. Rams have run one fake this year, a 23 yard completion to right winger Nick Scott.

Coming off of a hard-fought win at home last week over the Indianapolis Colts, the Pittsburgh Steelers stay home and welcome the Los Angeles Rams to Heinz Field as the franchise from the city of angels rides into town for an afternoon tilt.

Prior to the start of the 2019 season, this one was circled as a marquee matchup with two hopeful Super Bowl teams.

Instead, what we’ll get on Sunday is a watered-down matchup between two teams struggling with health and overall execution on the field.

Sure, the Rams have wins over New Orleans and Carolina this season, but they’ve also topped two of the worst teams in football — Atlanta and Cincinnati — in back-to-back weeks, helping pad the stats.

That said though, this is still a very explosive Rams offense under the direction of head coach Sean McVay and fifth-year quarterback Jared Goff.

Despite struggling to run the football consistently with guys like Todd Gurley, Malcolm Brown, and Darrell Henderson, the Rams are still able to run a ton of play-action fakes, which allows Goff plenty of time in the pocket and the ability to pick apart defenses.

One thing the Rams do really well under McVay is rolling the pocket for Goff off of play-action fakes. That allows the Rams’ offensive line to reset and create a clean pocket around Goff, giving him ample time to work down the field.

On top of that, the Rams are really good at scheming up guys, allowing playmakers like Robert Woods, Cooper Kupp, Brandin Cooks, and Josh Reynolds.

Here against the Bengals in London two weeks ago, the Rams opened up with a great play design to get Woods in space, getting Goff into a rhythm early while picking up an explosive play in the process.

The Rams motion Woods from right to left across the formation, allowing him to set up in tight. Once the ball is snapped he runs a crossing route back underneath the formation as Goff fakes the handoff. Once Goff gets his head around it’s an easy dumpoff to Woods, who then takes it 31 yards to get the Rams out of their own end.

If you play man coverage against the Rams and have a safety single-high, the play-action passing game is going to rip you to shreds.

Now, the Falcons’ defense is very bad, but look at the execution here on the play-action pass that’s ultimately a deep slant route.

Cooks is so quick and clean off the line of scrimmage that the Falcons’ corner simply doesn’t have a chance.

That made for an easy pitch and catch between Goff and Cooks for a gain of 12 yards on what ultimately became a scoring drive.

The Rams run a ton of play-action, but they’ll also spread you out and work it down the field out of the gun.

Pittsburgh has a ton of issues against offenses when they go empty, so expect McVay to go empty quite a bit early to get the Steelers’ defense out of rhythm while searching for mismatches down the field.

Notice above that Cincinnati rookie linebacker Germaine Pratt is tasked with covering Reynolds up the seam out of empty. That’s a clear mismatch and one the Rams exploit for the touchdown. Do not be surprised if that happens on Sunday.

More traditionally, the Rams like to use their running backs out of the backfield as pass catchers, and boy do they have some good ones.

It’s not clear just what’s going on with Gurley at this point, but when he’s on the field he’s super effective as a runner and a pass catcher. He can run almost any route the Rams want him to, and he has quite the ability to make plays on the football like a receiver would.

That’s a terrific over-the-shoulder catch by Gurley. Not only does he track the football well, he secures it quickly and does a great job getting both feet down for the touchdown.

It’s really unfair how many weapons this Rams offense has at its disposal.

Everett isn’t your traditional tight end. He’s a great move tight end piece that is Uber athletic for the position and much more explosive than most. When you have a coach like McVay that is smart enough to scheme up ways for him to win, you let the athletic specimen try and win the matchups. Everett’s done that at a consistent rate this season.

While the passing game is the calling card for the Rams, Los Angeles wants to be balanced and will work in the run game throughout the game. The problem is, at least in the last few weeks, the run game hasn’t been very good.

A lot of that falls on the offensive line, which has failed to get a consistent push in the last month or so.

I love the Rams’ tackle duo. Whitworth continues to get it done in pass protection and run blocking at a high level. He’s a great leader for this group and a steadying presence on the left side, while Havenstein is the classic mauler that throws people out of the club. Both will have their hands full on Sunday.

Inside, Demby and Allen are average at this point in the season. I do like Blythe quite a bit; he’s technically sound inside and is an underrated athlete.

This group overall is really good in pass protection, but the run game is their weakness.

On special teams, the Rams have an elite specialists duo in kicker Greg Zuerlein and punter Johnny Hekker. Zuerlein has a cannon for a leg, while Hekker has incredible strength, touch and accuracy on his punts. These guys can really change the game for the Rams.

Additionally, Hekker can keep the Rams’ offense on the field in a myriad of ways, namely on fake punts. He pulled off a fake punt pass to safety Nick Scott against the Falcons, and has had plenty of success on fakes in the past. Watch out for the fake near midfield.

JoJo Natson serves as the kick returner and punt returner. He’s very safe and sound on punt returns and has the ability to really flip the field with his game-breaking speed. On the year he’s averaging 10 yards per punt return with a long of 35, while also averaging 22 yards per kick return. However, he’s returned just 5 kicks this season.